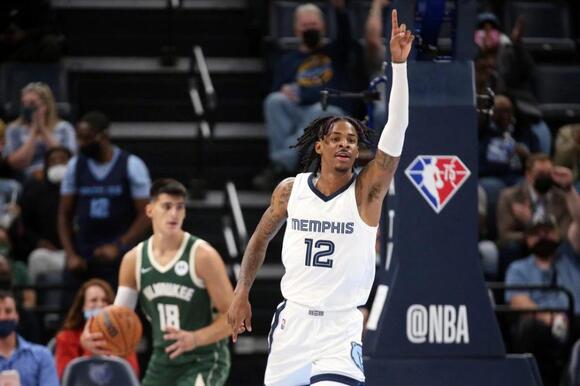 The Memphis Grizzlies exercised their rookie contract option for star point guard Ja Morant on Saturday, tying him to the team through the 2022-23 season.

Morant, 22, was the second overall pick of the 2019 NBA Draft and was named Rookie of the Year in his first season. 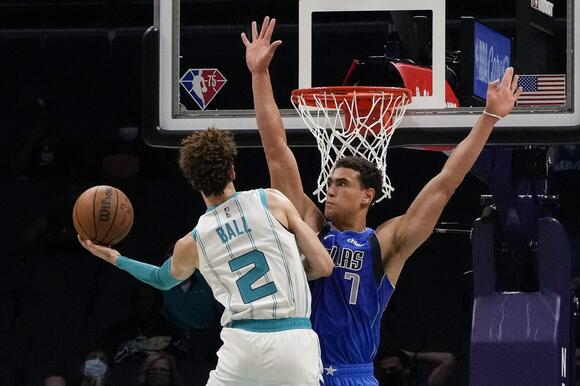 It’s not only Golden State Warriors fans who are excited about the return of Klay Thompson. By the looks of it, even Memphis Grizzlies guard Ja Morant can’t wait to see the other half of the Splash Bros in action. Thompson is progressing well in his recovery, even scrimmaging with...
NBA・2 DAYS AGO
ClutchPoints

Ja Morant avoided a serious knee injury; however, the Memphis Grizzlies star will still miss some time. During Friday’s game against the Atlanta Hawks, Morant sustained a non-contact leg injury that forced him out for the rest of the contest. Due to the nature of the issue, several fans feared it could be some sort of tear. Fortunately, the Grizzlies later revealed that it was a left knee sprain.
NBA・4 DAYS AGO
The Daily Memphian

It might be time to rethink how to approach Jaren Jackson Jr.’s “foul trouble,” and glancing at what trade/draft options are out there.
NBA・1 DAY AGO
ClutchPoints

Memphis Grizzlies guard Ja Morant is off to a hot start this 2021-22 season, but it surely isn’t a huge surprise. His superstar rise in the NBA is not by accident, as he has consistently proven that he’s among the elites of the league. Speaking to Marc J. Spears of...
NBA・14 DAYS AGO

MEMPHIS, Tenn. — Have you seen Nike’s new ad? It features Memphis Grizzlies star Ja Morant, and shows some love for the bluff city. Morant tweeted out the new commercial from the athletic company Tuesday, saying, “A question for all those who question your game. #SaysWho @NikeBasketball.”. Nike tweeted: "Defy...
NBA・9 DAYS AGO
basketball-addict.com

Ja Morant is beginning to take off as a truly stellar point guard in his third season. He’s averaging 25.9 points per game on 49.3 percent shooting from the field and 38.2 percent on threes, in addition to 7.3 assists, 6.4 rebounds and 1.6 steals, for the Memphis Grizzlies. The young star’s vastly improved scoring […] The post Kevin Durant compares Grizzlies star Ja Morant to five highlight-reel legends appeared first on ClutchPoints.
NBA・14 DAYS AGO
FastBreak on FanNation

Here's What Grizzlies' Ja Morant Tweeted After Getting Injured

Ja Morant of the Memphis Grizzles sent out three tweets on Friday night after getting injured.
NBA・6 DAYS AGO
ClutchPoints

The Memphis Grizzlies just took down one of the best teams in the NBA in the Utah Jazz, thanks in large part to Jaren Jackson Jr.’s clutch game-winning triple. For his part, Ja Morant couldn’t help but be proud of his team and JJJ for a job well done. After...
NBA・10 DAYS AGO

When Memphis Grizzlies star Ja Morant suffered a non-contact leg injury on Friday against the Atlanta Hawks, several people feared it was an ACL or Achilles tear. After all, the way Morant suffered the injury was reminiscent of several season-ending and serious injuries that fans have seen on NBA players in the past.
NBA・5 DAYS AGO
localmemphis.com

MEMPHIS, Tenn. — Paul George crossed up Jaren Jackson Jr., pulled up and drained a 28-footer with two seconds remaining in the second quarter. The triple put the Clippers within three heading into halftime, and seemed to swing momentum towards LA. Then Ja Morant activated in the third quarter. George...
NBA・14 DAYS AGO
austinnews.net

The Memphis Grizzlies and host Minnesota Timberwolves each will go for their third win in a row when they meet Saturday night at Minneapolis. Memphis is coming off back-to-back wins at home against the Houston Rockets and Los Angeles Clippers. The Grizzlies will try to take that positive momentum on the road, where they are 2-4 this season compared with 6-3 at home.
NBA・13 DAYS AGO
Los Angeles Times

Ja Morant scores 17 of his 28 points in the third quarter as the Clippers dropped only their second game in 10 contests in a 120-108 loss to Memphis.
NBA・14 DAYS AGO

Moneybagg Yo & Ja Morant Team Up For Nike Memphis Ad

Ever since entering the league a couple of years ago, Ja Morant has had to deal with his fair share of doubters. Many thought that the Memphis Grizzlies star simply wasn't going to cut it against some of the bigger players in the league, and they also felt as though he was going to NBA purgatory, as the Grizzlies franchise hasn't exactly been the definition of success over the last few decades.
NBA・9 DAYS AGO
grizzlybearblues.com

Memphis Grizzlies guard Ja Morant suffered a knee injury Friday night, and it looked very concerning. Morant was dribbling into the lane during Friday’s game against Atlanta when he pulled up in obvious pain. Morant was unable to put any weight on his left leg and was clutching his knee. Morant appeared to bang his right knee with John Collins, but was clutching at his left leg after going down. The star guard had to be helped to the locker room.
NBA・6 DAYS AGO
Bleacher Report

Ja Morant Says Grizzlies Met For 90 Minutes After Wolves Loss: 'We Have to Be Real'

The Memphis Grizzlies held a team meeting following Saturday's 138-95 loss to the Minnesota Timberwolves. "We have to be real with each other," Grizzlies star Ja Morant told reporters. "We know what kind of team we can be." The meeting may have had its intended effect, as Memphis edged out...
NBA・10 DAYS AGO
The Commercial Appeal

Ja Morant couldn't have another highlight dunk before Thanksgiving? Says who. The Memphis Grizzlies guard got airborne in the first quarter by coming off a screen by Steven Adams then driving down the lane to finish with a thunderous, one-handed dunk with Toronto Raptors forward Chris Boucher flying by. Boucher...
NBA・8 DAYS AGO
Sportsnaut

Ja Morant left in the first quarter with an apparent knee injury, and the Memphis Grizzlies never recovered as the
NBA・6 DAYS AGO
nbcsportsedge.com

The App is Back! Don’t forget to download the NBC Sports EDGE app to receive real-time player news, mobile alerts and track your favorite players. Plus, now you can check out articles and player cards. Get it here!. The first day of games after Thanksgiving was a busy one, as...
NBA・6 DAYS AGO
Bleacher Report

The Memphis Grizzlies announced that point guard Ja Morant will not return to his team's home game against the Atlanta Hawks on Friday after suffering a left knee injury. The team later announced Morant has been diagnosed with a sprained knee, per ESPN's Adrian Wojnarowski. Morant appeared to suffer the...
NBA・6 DAYS AGO