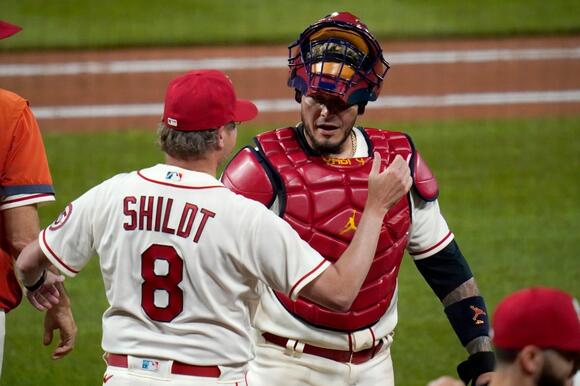 ST. LOUIS–On the record reaction from St. Louis Cardinals players to the firing of manager Mike Shildt has been hard to come by since Thursday’s surprise announcement, but at least one player is making his thoughts known.

Over the weekend, Yadier Molina spoke to media outlets in Puerto Rico. El Nuevo Dia reports that Molina was surprised by the move.

“We had very good communication,” he said of his own relationship with Shildt. “We went to the playoffs three times in four years. Maybe there was some problem between him and the management. I can’t give you the reasons, but from what I know inside the clubhouse, there wasn’t any kind of problem.”

Asked for his thoughts on what attributes the next manager should have, Molina told the outlet “It has to be someone who thinks about the organization and trying to win more than anything else. If he is a Puerto Rican, then better. It would be nice to play for a Puerto Rican manager my last season. But the mentality of winning, doing things well and protecting ourselves is the most that a player wants .”

Former Cardinal Carlos Beltran, a native Puerto Rican, has been speculated by some as a possible managerial candidate for St. Louis. Beltran was fired by the Mets before he ever managed a game in 2020, over his reported role in the Houston Astros’ sign stealing scandal. John Mozeliak, President of Baseball Operations, said Thursday there were likely going to be internal candidates for the position, believed to be first base coach Stubby Clapp and bench coach Oliver Marmol, and that he hoped the rest of the 2021 staff would return in 2022

he wants a Puerto Rican manager for his "last" year. Maybe you forgot what country your playing in ? Overpayed prima donna.

It would not have been surprising if Matt Carpenter languished in free agency. The former St. Louis Cardinals utility man has seen his production drastically fall off over the past three seasons, getting to the point where he was practically unplayable. Carpenter just does not appear to have anything left.
MLB・13 DAYS AGO
FanSided

Harrison Bader had his best year yet in 2021 for the St. Louis Cardinals. A change in approach at the plate played a big part. Harrison Bader has been a lightning rod for fan criticism since he debuted with the St. Louis Cardinals all the way back in 2017. He’s flashy, he’s got the swag, and when he can’t back it up on the field, it gives fans an easy place to land their criticism.
MLB・7 DAYS AGO
FOX2Now

ST. LOUIS–Major League baseball teams had until 7pm Central Tuesday night to offer 2022 contracts to players on their 40 man roster who have less than 6 years of MLB service time. The deadline was moved up so teams and players could prepare for what could be a labor lockout Wednesday night with the expiration of the collective bargaining agreement with the player’s association.
MLB・5 DAYS AGO
FanSided

The St. Louis Cardinals are in “active” talks with multiple free-agent starting pitchers. The St. Louis Cardinals have been looking at the free agent pitching market, both starters and relievers, and have made it their No. 1 priority this offseason. Perhaps they could be close to making a move, as...
MLB・13 DAYS AGO

The St. Louis Cardinals need Raisel Iglesias for the end of games

The St. Louis Cardinals found a starter but now are looking to add to their bullpen. Rasiel Iglesias should be at the top of their list. John Mozeliak brought St. Louis Cardinals fans a welcome surprise this week by signing Steven Matz to a very reasonable four-year, $44 million deal. This action from the Cardinals’ front office ahead of both Thanksgiving and the impending MLB lockout is a welcome change from last year’s holding pattern.
MLB・9 DAYS AGO
redbirdrants.com

St. Louis Cardinals pitcher Von McDaniel took the baseball world by storm in 1957. His career was over less than a year later. One of the greatest hoaxes in baseball history began on April 1, 1985, when journalist George Plimpton concocted the tale of fictitious New York Mets pitching prospect Sidd Finch. The story ran in Sports Illustrated, and the thought of Finch, a flamethrower who could supposedly run his fastball up to an unprecedented 168 mph (actually) with pinpoint control, pitching for their team left Mets fans jubilant. A week later, a follow-up article announced Finch’s retirement, and it was revealed as a hoax on April 15.
MLB・8 DAYS AGO
FanSided

The MLB non-tender deadline has been moved up in anticipation of the likely work stoppage starting early December. Who are some players the St. Louis Cardinals could let go?. Usually, the Major League Baseball deadline to tender contracts to players is in December. This year, however, the MLB and MLBPA have decided to move that date up to Nov. 30. This will give a new wave of free agents a chance to latch on with a new organization before a possible lockout.
MLB・7 DAYS AGO
FanSided

3 reasons to be thankful for St. Louis Cardinals this Thanksgiving

Happy Thanksgiving, St. Louis Cardinals fans! The team has many things to be thankful for this offseason. The St. Louis Cardinals had quite the 2021 season and look to build toward a better 2022 season. After a 2021 season that started with high expectations after the acquisition of Nolan Arenado,...
SAINT LOUIS, MO・10 DAYS AGO

Starting pitcher Steven Matz, a key component to a turnaround season for the Toronto Blue Jays in 2021, has agreed to a four-year, $44 million deal with the St. Louis Cardinals, pending a physical, sources familiar with the deal told ESPN's Jeff Passan on Tuesday night. Matz could earn up...
MLB・12 DAYS AGO
dodgerblue.com

With a need for starting pitching, the Los Angeles Dodgers are believed to have interest in re-signing Clayton Kershaw and Max Scherzer. President of baseball operations Andrew Friedman acknowledged a focus would be on the team’s rotation in free agency, and thus far L.A. has addressed that by signing Andrew Heaney to a one-year contract.
MLB・11 DAYS AGO
FanSided

Why St. Louis Cardinals are unlikely to trade for starting pitcher

The St. Louis Cardinals are unlikely to trade for a starting pitcher, and it all comes down to the astronomical asking prices. At this point, it’s well-established that the St. Louis Cardinals have made addressing their starting rotation their No. 1 priority this winter. They have missed on a few of their targets, including Alex Wood, Alex Cobb and Andrew Heaney, but they are actively working the phones trying to add a starter.
MLB・12 DAYS AGO
Sportsnaut

As is tradition around these parts after the season is over, we’re taking a look at every player that got into a game for the St. Louis Cardinals this season. That’ll range from someone that didn’t record an out to someone that played almost every inning. Treat it like they are stopping by the manager’s office (umm, also imagine this was before the managerial change) on their way home for the winter for a performance review. Stats listed are ones generated during their time with the Cards and the grade is based not only on their performance but on the expectations for them going into the season. As he has the past few years, the legend that is cardinalsgifs has provided our excellent header image!
MLB・11 DAYS AGO
News-Democrat

The St. Louis Cardinals checked a major item off their pre-Thanksgiving to-do list late Tuesday night, coming to an agreement with free agent left-handed pitcher Steven Matz. Matz agreed to a four-year contract which will pay him a minimum of $44 million and includes incentives that could push the value of the deal to $48 million.
MLB・11 DAYS AGO
FOX 2

What’s next for the St. Louis Cardinals this offseason?

ST. LOUIS–The Cardinals jumped into the free agent fray late Tuesday by agreeing to terms with lefthanded pitcher Steve Matz on a four-year, $44 million deal that is reportedly all done except for waiting on a physical. The move adds a pitcher able to carry at least 150 innings for the 2022 rotation, and importantly […]
MLB・11 DAYS AGO
Newsday

There will be no homecoming for Long Island’s Steven Matz. And Mets owner Steve Cohen isn't pleased about it. Matz, a former star at Ward Melville High School who most recently pitched for the Blue Jays, shunned the team he was drafted by and came up with in the big leagues, agreeing to a four-year, $44-million deal with the Cardinals late Tuesday night.
MLB・11 DAYS AGO
Yardbarker

The first major Blue Jays free agent domino has fallen. A week before an impending MLB lockout, Steven Matz has decided on his 2022 baseball home. The 2021 Blue Jay has signed a four-year deal with the St. Louis Cardinals, per Jeff Passan and others. Matz's new deal will pay...
MLB・11 DAYS AGO
FanSided

St. Louis Cardinals make curious decision not re-signing Luis Garcia, but here’s why they decided to let him go. After signing left-hander Steven Matz, the St. Louis Cardinals turned their attention to addressing the bullpen. They had many calls out to free agents and, given their need for depth, could use as many as two additional arms in the late innings.
MLB・3 DAYS AGO
cardsconclave.com

As is tradition around these parts after the season is over, we’re taking a look at every player that got into a game for the St. Louis Cardinals this season. That’ll range from someone that didn’t record an out to someone that played almost every inning. Treat it like they are stopping by the manager’s office (or, here, the GM office which is hitting a little close to reality) on their way home for the winter for a performance review. Stats listed are ones generated during their time with the Cards and the grade is based not only on their performance but on the expectations for them going into the season. As he has the past few years, the legend that is cardinalsgifs has provided our excellent header image!
MLB・2 DAYS AGO