ChargerReport is a FanNation channel covering the Los Angeles Chargers

Keenan Allen vs. Marlon Humphrey Will Be a Key Matchup on Sunday 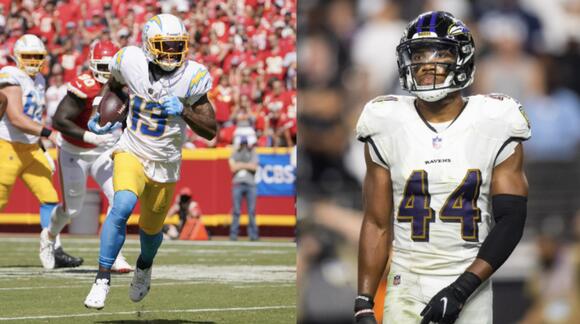 The Chargers (4-1) face yet another tough matchup this Sunday when they play the 4-1 Baltimore Ravens. Their quarterback Lamar Jackson is playing at an MVP-like level and will be a tough matchup for the defense.

There are always matchups that decide games, so here are the three that will decide the outcome between the Chargers and the Ravens.

This feels like a speed against speed matchup. Davis is the fastest cornerback the Chargers have, and Hollywood Brown is legit Speedy Gonzalez. He is healthy so far this year and has caught 28 passes for 451 yards and five touchdowns. He has caught one touchdown in four of five games this season. He has receptions of 49, 43, and 42 yards, so the Chargers will need to be careful with him. They have faced two other speedy receivers in Chiefs Tyreek Hill and Raiders Henry Ruggs III, so they have experience. Davis has improved his coverage skills this season and should be looked up to cover Brown often.

The Chargers need to generate a pass rush to try to slow down Jackson. They will be counting on Joey Bosa to lead them in that way on Sunday. They need him to have a three sack style performance. He may face former Steelers left tackle Alejandro Villanueva often. He is the Ravens current left tackle and has struggled to adjust to the Ravens style. Staley could have Bosa line up against Villanueva to see if he can handle the pass rusher.

Flacco on The Move, Again

I was somewhat amused by the (1-5) Jets trade for 36-year-old Joe Flacco. What’s the point?. It’s not as if Joe is going to bring the Jets back from the dead. It’s not as if the Super Bowl 47 MVP is the most willing mentor to a young quarterback. He’s not really interested in that sort of thing. He’s never been a quarterback that anyone would label, “cerebral”. He’s even on record dismissing the complexities of the game as overrated – that it’s not rocket science. And that in part has always been the rub for me when it comes to Flacco.
NFL・29 DAYS AGO
The Baltimore Sun

There was a time when the Ravens would have celebrated holding Le’Veon Bell to 48 yards on 11 carries. Not so long ago, he lived in their nightmares — those outside runs on which he’d wait and wait, then snap off a double-digit gain, or the pass routes on which he’d toy with some poor linebacker. As an All-Pro for the Pittsburgh Steelers, he played a starring role in some of the most painful ...
NFL・18 DAYS AGO
The Spun

One Ravens player had a strong feeling before the game on Sunday that quarterback Lamar Jackson was going to be out. Cornerback Marlon Humphrey spoke after Baltimore’s win and said that he could tell on the team plane that Jackson was likely not going to play. “I looked over and...
NFL・6 DAYS AGO
profootballnetwork.com

As Lamar Jackson’s illness worsens, who will start at QB for the Ravens vs. the Bears?

An alarming development out of Baltimore: Lamar Jackson has been added back to the Baltimore Ravens’ injury report with a non-COVID-19 illness and is officially questionable for Sunday’s game against the Chicago Bears. The Ravens updated Jackson’s status Saturday afternoon. Lamar Jackson questionable vs. Bears. Jackson had missed practice Wednesday...
NFL・7 DAYS AGO

On Friday morning, Lamar Jackson took a big step toward playing against the Chicago Bears on Sunday. Jackson missed practice with an illness on Wednesday and Thursday, putting his availability in doubt for Sunday’s game. However, the Baltimore Ravens quarterback returned to practice on Friday. It looks like the NFL...
NFL・8 DAYS AGO
ChargerReport

Chargers Offense Anything but Electric Against Patriots

The scoreboard read 27-24 New England Patriots (4-4) as the victors and standing tall over the Los Angeles Chargers (4-3). It also means that the Chargers haven't beat Patriots head coach Bill Belichick since 2008, but it is deeper than that. For weeks, the problem that was consistently pointed at...
NFL・27 DAYS AGO
ChargerReport

The Chargers made a significant roster move on Saturday when they activated defensive tackle Justin Jones from IR. It has been a move that the team needs, especially facing the New England Patriots on Sunday. “He’s practiced all three days and in pads,” Staley said Friday after practice. “He’s looked...
NFL・28 DAYS AGO
ChargerReport

The Chargers were down 27-17 with 40 seconds left; quarterback Justin Herbert had the ball at the 24-yard line when he dropped back, he threw a nice jump ball pass into the end zone. Rookie receiver Josh Palmer jumped over Patriots cornerback Jalen Mills and safety Adrian Phillips to make the touchdown grab.
NFL・23 DAYS AGO

Chargers Grades After Loss to Patriots

The Chargers lost 27-24 to the New England Patriots on Sunday. It was an ugly game for the offense and it actually wasn’t the defense who cost them the game. The defense actually kept them in the game. It was a bad showing especially because of how close the game...
NFL・26 DAYS AGO
ChargerReport

It wasn't long ago when there were questions about Chargers quarterback Justin Herbert's play. There were questions like if the NFL had caught up to him or was he being exposed. Those were just last week after a tough loss to New England. Well, he was one of the reasons...
NFL・20 DAYS AGO
ChargerReport

Chargers Special Teams vs. KR/PR Gunner Olszewski Is a Matchup to Watch

On Sunday, the Chargers (4-2) will face a familiar foe in the New England Patriots (3-4). Head coach Bill Belichick has been a thorn in the Chargers side for years. He is 10-3 all-time against the Chargers as the Patriots head coach. The last time the Bolts beat his team...
NFL・27 DAYS AGO
ChargerReport

The Chargers (5-3) had a strong performance against the Philadelphia Eagles (3-6). It felt as close to a “must win” for the Chargers as any game has felt this season. They needed to return to LA with a victory. Here are the grades after their victory against the Eagles. Quarterback:...
NFL・19 DAYS AGO

Chargers vs. Eagles Prediction and Breakdown

The Los Angeles Chargers (4-3) head to the “City of Brotherly Love” to face the Philadelphia Eagles (3-5) at Lincoln Financial Field on Sunday at 1:05 p.m. pacific. The game will be on CBS, so it will be Ian Eagle (play-by-play), Charles Davis (analyst), and Evan Washburn (sideline) on the call.
NFL・21 DAYS AGO
ChargerReport

Another tough quarterback matchup that the Chargers defense will face on Sunday. Like it or not, Eagles quarterback Jalen Hurts is dangerous and can hurt a defense. Even his dual ability is a threat. Hurts has had a shaky sophomore season. He has had some good games against the Atlanta...
NFL・22 DAYS AGO
ChargerReport

The Chargers final injury report came out on Friday and running back Austin Ekeler (practiced or not). He is questionable heading into Sunday's game against the New England Patriots with a hip injury. "It felt much better the last two days, and real hopeful that he can play," Staley said.
NFL・29 DAYS AGO
ChargerReport

Nick Sirianni was once a member of the San Diego Chargers coaching staff in 2013. After spending four seasons with division rival Kansas City Chiefs, he decided to take a job with the Chargers as an offensive quality control coach. That was the same offseason a receiver from Cal that...
NFL・24 DAYS AGO

Chargers Have ‘All Around’ Win in All Three Phases Against Eagles

On Sunday, the Chargers (5-3) pulled out the 27-24 narrow victory over the Philadelphia Eagles (3-6). There is more to this victory. It was obviously a strong performance from quarterback Justin Herbert and receiver Keenan Allen, but this game might have been different. This was as close as a "must-win"...
NFL・20 DAYS AGO
ChargerReport

Coming into week 10, the Los Angeles Chargers find themselves sitting at a pleasant 5-3 record coming off of a huge road victory against the Philadelphia Eagles. They host the 3-5 Minnesota Vikings, coming off a disappointing loss against the Baltimore Ravens. Will the Chargers be able to keep their momentum going and improve to 6-3?
NFL・14 DAYS AGO
ChargerReport

Chargers DT Linval Joseph still ‘a force of nature’ at 33

Linval Joseph is the man in the middle of the Chargers defensive line. Last Sunday against the Eagles, he was a wrecking ball, having nine tackles in a matchup that needed his production, especially against a good running offense. This is nothing new for the big man. He has been...
NFL・16 DAYS AGO

ChargerReport is a FanNation channel covering the Los Angeles Chargers