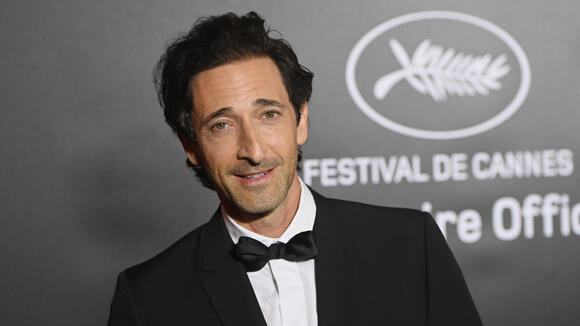 Adrien Brody turned down a chance to be in Lord of the Rings , a decision he immediately regretted when he saw the Peter Jackson epic in the theater.

In a recent career retrospective with GQ , the Oscar-winning actor revealed the surprising fact, as he talked about the film he did do with Jackson, 2005’s King Kong .

“I, somehow, didn’t grasp it,” Brody said of being approached for The Fellowship of the Ring . “I don’t know what part I would have been right for, but it was some Hobbit-like character. I was looking for something else.”

And of course, Brody said he had major regret.

Brody went on to say King Kong was a wonderful experience for him and he learned a lot about making a big-budget, epic tale. “We had a premiere in  Times Square and they shut down all of Times Square,” he said. “The mayor was there and introduced us to the city. It was a big deal. My face was immortalized on a McDonald’s soda cup. When does that happen for anyone?”

Watch the full career retrospective below.

Dark Castle Entertainment (Orphan, House of Wax) and Egyptian actor Mohamed Karim (A Score to Settle) have signed a deal to develop the Middle East-set horror film Book of Chaos. Based on Karim’s original idea, the film follows a “relentlessly driven Egyptologist” who, searching for the secrets of a long-buried prophecy, unwittingly unleashes an ancient evil and must battle demonic spirits, a dark cult and the gods themselves to save the world and the woman he loves. Karim will play one of the leads in the film. Thomas M. Hewlett will write the screenplay based on Karim’s original idea. Alex Mace, Hal...
MOVIES・1 DAY AGO
The Hollywood Reporter

Westworld star Thandiwe Newton is in negotiations to join Channing Tatum in Magic Mike’s Last Dance, the third installment of the hit twerk-filled Warner Bros. movie series. Steven Soderbergh is returning to the director’s chair for Last Dance after having skipped the 2015 installment, Magic Mike XXL. Reid Carolin, who was behind the screenplays for the first two Magic Mike films, is back as the writer for the project, which is being made for HBO Max. Tatum returns as male stripper Mike Lane, a character that was loosely based on Tatum’s own experiences as a stripper in Florida. Newton’s role is unclear, but it...
MOVIES・1 DAY AGO
The Hollywood Reporter

How Jared Leto Completely Transformed Into His ‘House of Gucci’ Character

For MGM/United Artists’ House of Gucci, Jared Leto plays Paolo Gucci, the middle-aged, overweight and balding cousin of Adam Driver’s Maurizio Gucci. For an actor who has grown accustomed to transformative work in films like 2013’s Dallas Buyers Club (which earned him an Oscar for best supporting actor) and this year’s The Little Things, one shouldn’t be surprised if Leto’s presence in the film’s cast goes unnoticed until the final credits roll. Assisting Leto in his uncannily realistic portrayal of the onetime designer turned Gucci family black sheep was makeup artist Göran Lundström, who earned an Oscar nomination in 2019 for...
LOS ANGELES, CA・1 DAY AGO
Insider

The Beatles tried to make a 'Lord of The Rings' movie but J.R.R. Tolkien turned them down

The Beatles meet 'The Lord of the Rings' in 'Get Back':

Just as The Beatles used their timeless songs in the 1960s to take millions of listeners across the universe on a magical musical mystery tour, Oscar-winning “The Lord of the Rings” trilogy director Peter Jackson has taken millions of viewers worldwide on a magical cinematic mystery tour in this century.
MOVIES・12 DAYS AGO
94.5 KATS

Peter Jackson said he remained “in two minds” over the possibility of the Beatles having made a Lord of the Rings movie. The Fab Four had discussed plans to appear in a big screen production with Stanley Kubrick in 1968, after discovering J.R.R. Tolkien’s book series during their trip to India. If it had gone ahead, Jackson – whose three-part Beatles documentary Get Back just launched on Disney+ – might never have been able to make his own set of award-winning Middle-earth movies.
MOVIES・12 DAYS AGO
Vulture

The Beatles Lord of the Rings Movie That Could Have Been

When you think about the four lads from Liverpool, what are the associations that come to mind? Hamburg strip clubs? Sure. Sitar music? Yes, definitely. Hobbits? Apparently. While doing press for his Disney+ Beatles docuseries Get Back, LOTR impresario Peter Jackson explained to the BBC that the Beatles really wanted to make a Lord of the Rings movie, but were stymied by the series’ author J.R.R. Tolkien. “I’ve been scraping together little pieces of information. I’ve been interrogating Paul about it. Ringo doesn’t remember much,” he said. According to Jackson, the Beatles were introduced to Middle Earth by the Maharishi Mahesh Yogi, who gave copies of The Lord of the Rings to every member of the band (except Ringo, for some reason). 3/4 of the Beatles read the book while studying meditation in India, then pursued the film rights via Apple film producer Denis O’Dell.
MOVIES・14 DAYS AGO
loudersound.com

After the unforeseen madness of the past 18 months, very little surprises us anymore, but we must confess that ‘JRR Tolkien snubs John Lennon’s offer to play Gollum in a Beatles-directed film of The Lord Of The Rings saga’ wasn’t a sentence that we envisaged typing out today. And yet, here we are.
MOVIES・13 DAYS AGO

#Lord Of The Rings#Hobbit#Mcdonald
Polygon

A recent internal poll of Polygon employees found a split editorial edifice: The office was deeply divided on whether Peter Jackson’s Lord of the Rings trilogy was best watched as a Thanksgiving movie marathon or a Christmas movie marathon. The only answer was to dig deeper, weigh the arguments, and...
MOVIES・14 DAYS AGO
iHeartRadio

The Beatles nearly made 'The Lord of the Rings,' and now the band is sharing why the project fell through
MOVIES・12 DAYS AGO
imdb.com

A property that has been featured in HBO’s third season of “Succession” has just sold for $45 million. The mansion is located in the town in the hamlet of Wainscot in New York State. The sellers are David Susser, an aerospace and defense entrepreneur, and his wife, Marla Susser. Viewers...
TV & VIDEOS・7 DAYS AGO
Mental_Floss

While Peter Jackson's The Lord of the Rings trilogy is one of the most critically acclaimed film series of all time, it could’ve turned out completely different. Before the likes of Elijah Wood and Viggo Mortensen were cast, familiar faces such as Liam Neeson, Uma Thurman, and even Vin Diesel were considered for roles. And prior to Jackson’s take on J.R.R. Tolkien’s work, a certain group of mop-topped pop stars tried to get an adaptation going.
MOVIES・5 DAYS AGO

Why 'The Lord of the Rings' matters

When my daughter was maybe 8 or 9 years old, she came down with the flu. I stayed home with her, giving her meds, chicken soup and comfort, but eventually, she was getting bored, so it occurred to me that she would do well to have a good movie that would keep her mind off her ailment. As I glanced at our selection, many of the children's films we had seen ad nauseam, but my "Lord of the Rings" trilogy caught my eye.
POCATELLO, ID・14 DAYS AGO
Forward

(JTA) — (New York Jewish Week via JTA) — When Adrien Brody’s character burst onto the scene of HBO’s “Succession” last month, he became instantly iconic among the show’s Jewish fans. That’s thanks to his character’s visible Jewishness as well as the antisemitism he elicited. Brody’s character, Josh Aaronson, is...
TV SERIES・7 DAYS AGO
Collider

Best 'Lord of the Rings' Memes

This year marks the 20th anniversary of the premiere of Lord of the Rings: The Fellowship of the Ring, the first of three critically acclaimed films in Peter Jackson's record-breaking film adaptation of J.R.R. Tolkien's high fantasy novel. To celebrate, we've compiled some of the best Lord of the Rings memes the internet has to offer. There's lots of walking ahead, so hopefully, these will keep you entertained during the long, arduous journey!
MOVIES・1 DAY AGO
thetacomaledger.com

The Fellowship turns 20: a “The Lord of the Rings” retrospective

The LOTR films continue to show the quality of those who created them two decades later. Twenty years ago, when I was a seven-year-old boy, I went to the theater to see some Disney movie. That was when I first saw the trailer for “The Lord of the Rings: The Fellowship of the Ring”. For three staggering minutes my seven-year-old eyes popped out my head, my ears danced and my heart recoiled in gleeful terror and awe.
MOVIES・2 DAYS AGO
Winter is Coming

What is the order of the Lord of the Rings?

Ever since they were published in the 1950s, The Lord of the Rings books by J.R.R. Tolkien have been the seminal fantasy text of the last century. Peter Jackson made them into hugely successful movies, and they influenced everything from The Wheel of Time to Game of Thrones. If you’d...
BOOKS & LITERATURE・8 DAYS AGO
AOL Corp

The calls to "Cancel Mel Gibson" continue. Joshua Malina — the actor from West Wing, Sports Night and Scandal — has written an essay with that title and mission for The Atlantic, a reaction to news that Gibson will direct and star in Lethal Weapon 5. "Gibson is a well-known...
CELEBRITIES・2 DAYS AGO