A bitcoin futures ETF is coming next week. It could soon send the token soaring to $85,000, one analyst says. 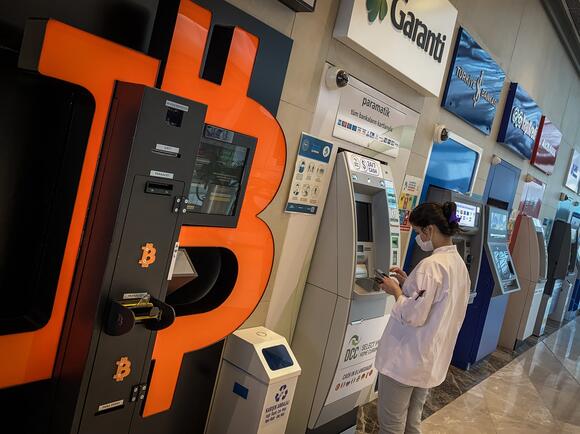 A bitcoin futures exchange-traded fund is set to launch next week and is making the crypto industry very excited.

It's not quite the pure bitcoin ETF that many crypto enthusiasts were hoping for, but analysts say it should still drive institutions towards the digital-asset market like never before.

If investors buy into the fund heavily, bitcoin could hit a record high of $85,000 in the coming months, according to Edward Moya, senior market analyst at trading platform Oanda.

Bitcoin crossed $60,000 last week for the first time since April as excitement built. It was roughly flat on Sunday at $61,050, according to Bloomberg prices, putting it within reach of April's all-time high of just under $65,000.

"A successful bitcoin ETF launch next week could easily support bitcoin's run to record territory," Moya said. "Bitcoin mania has been brewing on social media platforms over the past couple weeks."

"[If] initial trading volumes are strong, bitcoin could have enough momentum to target the $74,500 region," Moya said. He added that bitcoin "could have a path towards $85,000" in the coming months.

Simon Peters, cryptoasset analyst at eToro, said: "The market is clearly reacting positively as we edge ever closer to the 'holy grail' of a bitcoin ETF of the underlying asset."

ProShares, a US specialist in exchange-traded products, is due to launch a bitcoin futures ETF next week, according to a filing with the Securities and Exchange Commission. CNBC reported that a person familiar with the SEC's thinking said the ETF should start trading in the coming days.

It is set to be called the ProShares Bitcoin Strategy ETF and trade with the ticker "BITO."

An exchange-traded fund is a type of security that trades on an exchange - meaning investors can buy and sell shares - and tracks the performance of an asset or group of assets.

The ProShares ETF will track bitcoin futures rather than bitcoin itself. Futures are contracts to buy and sell an asset at a predetermined price and time. They track movements in the price of bitcoin pretty closely but mean investors do not have to physically own the token.

Read more: 2 ETF veterans-turned crypto investors break down why they think the SEC should approve a bitcoin ETF that invests in the digital currency itself instead of futures contracts

SEC chief Gary Gensler has been reluctant to approve a pure bitcoin ETF, due in part to concerns about the wild price swings in the market.

But the SEC reckons a futures ETF is safer. Bitcoin futures are offered by the Chicago Mercantile Exchange, a huge financial institution. Investors also have to put down collateral to trade futures.

The ETF would allow retail and institutional investors to much more easily gain exposure to bitcoin, analysts said. "An SEC bitcoin ETF approval is a watershed moment for the crypto industry as this could be the key driver for getting the next wave of crypto investors," Moya said.

However, Matt Blom, global head of sales trading at crypto company Eqonex, said he thinks the SEC won't approve an ETF based on bitcoin itself.

"As great as it is to finally have this asset class recognized, the supply squeeze we all really want to see is still, just out of reach," he said.

Other companies - namely Invesco, Valkyrie and VanEck - have also applied to launch bitcoin futures ETFs and could see their products begin trading soon. ProShares did not immediately respond to a request for comment.

One under-the-radar altcoin is surging after a surprise listing by top US crypto exchange Coinbase. In a new blog post, Coinbase says that the Biconomy (BICO) token will start trading on Coinbase Pro later today once appropriate liquidity conditions are met. BICO is an Ethereum-based altcoin that powers Biconomy, a...
MARKETS・1 DAY AGO
dailyhodl.com

A Bitcoin (BTC) whale moved more than $875.7 million worth of Bitcoin in a single transaction as BTC’s price continued to move sideways on Tuesday. The blockchain tracker Whale Alert first reported a transaction between two unknown wallets on Tuesday morning. A separate unknown wallet also received less than 0.002 BTC from the sending wallet.
MARKETS・1 DAY AGO
Markets Insider

The S&P 500 is down almost 5% since the new Omicron coronavirus variant was identified. But investors should buy the dip because Omicron might hasten the pandemic's end, according to JPMorgan. "Omicron could be a catalyst for rotation from growth to value, selloff in COVID and lockdown beneficiaries and rally...
STOCKS・11 HOURS AGO
MarketWatch

The largest cryptocurrencies were mixed during morning trading on Thursday, with Cardano (ADAUSD) seeing the biggest move, rallying 9.65% to $1.70. Polkadot (DOTUSD) led the decreases with a 0.90% drop to $36.41.
STOCKS・11 HOURS AGO

The S&P 500's 4% decline over the past week has created extreme oversold levels, according to technical analyst Katie Stockton. Volatility surged as much as 72% as fears of the new Omicron variant spread across markets. These are the key support and resistance levels investors should monitor to gauge what...
STOCKS・7 HOURS AGO
MarketWatch

Veteran trader Mark D. Cook, who passed away recently, closely monitored the market's health and was convinced that U.S. stocks are due for a major hit.
STOCKS・3 HOURS AGO
The Motley Fool

We all go through slumps. Unfortunately for crypto investors, so do these three cryptocurrencies.
MARKETS・8 HOURS AGO
Markets Insider

Fidelity's spot bitcoin ETF is set to start trading in Canada, while its US fund is still waiting for the SEC's green light

Fidelity has launched a spot bitcoin ETF in Canada that will start trading on Thursday. Fidelity is "the biggest asset manager to date with a bitcoin ETF", Eric Balchunas, senior ETF analyst at Bloomberg said. Spot bitcoin ETFs trade in Europe and Canada, but only futures-based ETFs have been approved...
MARKETS・11 HOURS AGO

It's all about having the widest opportunities to pursue growth.
MARKETS・15 HOURS AGO
MarketWatch

A weekly look at the most important moves and news in crypto and what's on the horizon in digital assets.
STOCKS・4 HOURS AGO
GOBankingRates

Do you want to buy Bitcoin? Here is a guide to help you understand how much Bitcoin is and how you can buy, store and manage your your cryptocurrency.
MARKETS・3 HOURS AGO
The Motley Fool

Buy This Instead of a Bitcoin ETF

Investors first need to realize exactly what they own when speculating with any investment.
MARKETS・1 DAY AGO

Grayscale Investments has fired back a the U.S. Securities and Exchange Commission (SEC) over the recent rejection of VanEck’s spot Bitcoin ETF application. The operator of the Grayscale Bitcoin Trust (GBTC) issued a letter to Secretary of the SEC, Vanessa Countryman, on Nov. 29 to argue the SEC is wrong to reject spot Bitcoin ETFs since it has now approved three Bitcoin futures ETFs, one each from VanEck, Valkyrie, and ProShares.
MARKETS・1 DAY AGO
The Motley Fool

Missed Out on Bitcoin? My Best Cryptocurrency to Buy Now and Hold

Ethereum is a programmable blockchain, a feature that enables decentralized finance (DeFi) products. The upgrade to Ethereum 2.0 will make the platform more scalable, enabling broader adoption. Ethereum is the second most widely held digital asset among institutional investors. Bitcoin was the first widely adopted cryptocurrency, a type of digital...
MARKETS・2 DAYS AGO
u.today

Fidelity, an American multinational financial services corporation, is set to launch its first spot Bitcoin ETF in Canada this week, according to Bloomberg senior ETF analysts. ETF launch. Fidelity is a multinational financial services corporation that was established in 1946, and it remains one of the largest asset management companies...
MARKETS・1 DAY AGO
GOBankingRates

Crypto Regulation: Fed Announces Roadmap for 2022 — What It Means for Investors and Developers

Federal bank regulatory agencies -- including the Board of Governors of the Federal Reserve System, Federal Deposit Insurance Corporation (FDIC) and Office of the Comptroller of the Currency -- issued...
MARKETS・2 DAYS AGO
dailyhodl.com

A closely followed crypto strategist and trader is putting Bitcoin investors on notice as he outlines a scenario where BTC could set a big bull trap. In a new strategy session, pseudonymous trader Altcoin Sherpa says that BTC investors are not yet out of the woods after the recent bounce as he sees a possible outcome where an underwhelming rally could put Bitcoin’s uptrend in question.
MARKETS・2 DAYS AGO
Markets Insider

Ether has surged by 530% during 2021, a stronger gain than bitcoin's doubling in price. The performance gap of more than 400 percentage points is the widest since 2015, according to Bloomberg data. Ether's run in November has been strong on a number of business developments surrounding the ethereum network.
MARKETS・2 DAYS AGO
Markets Insider

The convergence of stimulus checks and millions of new retail investors led to a boom in so-called meme stocks this year. The movement was led by epic short squeezes in GameStop and AMC Entertainment as investors YOLO'd their stimulus checks. These are 10 meme stocks that will be included in...
STOCKS・2 DAYS AGO