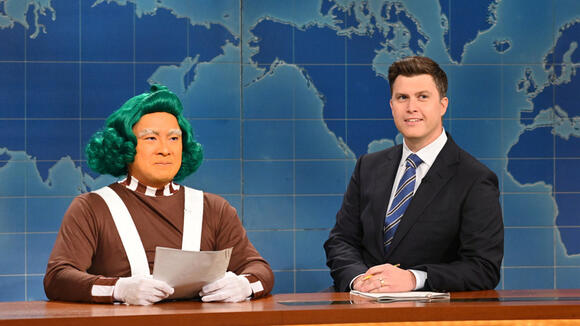 Bowen Yang brought the Saturday Night Live house down when he appeared as a “proud gay Oompa Loompa” for a segment on “Weekend Update.” The comic was trending on social media Sunday thanks to the hilarious moment.

Dropping by to initially talk about the unsafe working conditions in Willy Wonka ’s chocolate factory, co-host Colin Jost introduced Yang’s impeccable character as a “proud gay Oompa Loompa,” there to talk about the reaction to the first look at Timothée Chalamet ’s upcoming Wonka .

Colin apologized for the confusion as Yang’s character explained all he wanted to do was talk about a possible Oompa Loompa strike over the unsafe conditions at the chocolate factory.

“Now I guess I have got to call my parents,” Yang’s Oompa Loompa said to big laughs. “They live in Loompa-land. It’s not as progressive as here. They, like, just got Will & Grace . So yeah, it’s gonna be a conversation.”

Pushing forward, Yang’s Oompa Loompa said, “You know what, Colin? You did me a huge favor because now I can be honest — about everything. Point blank: the man doesn’t know how to make chocolate! He’s an ideas man who’s never touched a machine. He just tumbles into the inventing room and says something like ‘What about a gumdrop that makes children dream silly dreams?’ And it’s like, ‘Yeah, bitch. What about it?!'”

Yang has quickly become an SNL fan favorite, his unique characters who drop by “Weekend Update” — including Fran Lebowitz and the iceberg that sunk the Titanic — creating comedy gold.

Watch the full segment below.

At one point and time, SNL challenged the status quo, took on the establishment. Not so much anymore. SNL is as edgy as milk and pj's now

Bowen yang is the worst cast member I can’t believe he with full time status and snl is really getting bad look who hosted Kim k , really

Lorraine Bracco was thoroughly unhappy over the way her iconic character departed The Sopranos in the show’s final season. Recently visiting Talking Sopranos, the popular podcast hosted by show alums Michael Imperioli and Steve Schirripa, the actress who starred as therapist Dr. Jennifer Melfi revealed her displeasure over her final scene, which occurred with Tony (James Gandolfini). In the classic HBO show’s penultimate episode, “The Blue Comet,” Melfi while at a dinner party with colleagues is made aware of a study that claims sociopaths take advantage of talk therapy. Looking into the matter on her own, Melfi is convinced of the study...
TV SERIES・11 HOURS AGO
The Hollywood Reporter

Many people will be spending extra time in front of the TV during the holidays, and Black Friday is a great time to upgrade your home theater with a new soundbar. Whether you’re amplifying your home entertainment experience or shopping for tech gifts, we’ve rounded up some of the best Black Friday soundbar deals to scope out and help take your or your movie-loving giftee’s sound systems to the next level. From ultra-slim soundbars with crystal-clear sound, to 9.1-channel systems with immersive Dolby Atmos, these on-sale devices give power and precision for movies, TVs and music, regardless of your budget or...
ELECTRONICS・4 DAYS AGO
The Hollywood Reporter

NBC’s Law & Order revival is bringing back its first familiar face. Black-ish star Anthony Anderson will reprise his role as Detective Kevin Bernard in what is being billed as the 21st season of the procedural that launched a franchise. Also joining the cast as a series regular is Hugh Dancy, who will play an assistant district attorney in the series from Dick Wolf and showrunner Rick Eid. Anderson is the first former L&O star to join the revival, which is expected to feature other former stars of the original series. Sources note Anderson has signed a one-year deal to return. It’s...
TV & VIDEOS・3 DAYS AGO
Collider

Saturday Night Live has worked to make some strides in terms of casting and inclusion, and it would appear that was the topic of discussion between cast member Bowen Yang and host Simu Liu. The two can certainly relate to each other, with Liu being Marvel's first male Asian superhero, and Yang being SNL's first male Asian cast member. A competition quickly develops, however, with the two competing for these Asian-centric honors that Yang questions "why people even keep track of?"
TV & VIDEOS・5 DAYS AGO

Taylor Swift showed her comedic side in a newly released promo for her Saturday Night Live musical guest appearance on November 13. The 31-year-old songstress got jabbed by SNL players Aidy Bryant and Bowen Yang over the fact that she would be performing despite not having released her Red album (which then dropped Friday).
MUSIC・14 DAYS AGO
Collider

Saturday Night Live had Jonathan Majors hosting last night with musical guest Taylor Swift! And with it came the "Broadway Benefit" sketch, where we got to watch old school Broadway legends Blithe and Brick (played by Bowen Yang and Cecily Strong) sing to raise money to help Broadway since the theatre industry has been struggling after being shut down for a year because of COVID.
ENTERTAINMENT・12 DAYS AGO
NBC News

Simu Liu and Bowen Yang are often hailed as trailblazers in the Asian American community — for being the first Marvel Asian superhero and for being the first Asian cast member on "Saturday Night Live." So when the pair teamed up for an "SNL" sketch over the weekend, they poked fun at the idea by competing over increasingly ridiculous “firsts,” from the “First Gay Asian Cast Member to Mispronounce ‘Boutique’” to the “First Asian Man to Deadpan on Splash Mountain.”
TV & VIDEOS・4 DAYS AGO
GOBankingRates

How Rich Is Pete Davidson?

Pete Davidson, 28, has been a fixture on "Saturday Night Live" since 2014. In addition to being a comedian, he is an actor, screenwriter and producer. While he is considered to be a formidible, and...
CELEBRITIES・3 DAYS AGO

Taylor Swift was the musical guest on last night’s (November 13) episode of Saturday Night Live – watch her perform the new 10-minute version of ‘All Too Well’ below. The extended version of the fan-favourite track is a centrepiece of Swift’s new re-recorded version of 2012 album ‘Red’, which came out on Friday (November 12), and arrived alongside its own short film starring Sadie Sink (Stranger Things) and Dylan O’Brien (Maze Runner).
CELEBRITIES・12 DAYS AGO
DesignerzCentral

Whoopi Goldberg told a guest co-host on Tuesday's edition of "The View" that it's the responsibility of "white people" to "step up" and make skin color a non-issue in America. Read Also: Whoopi Goldberg’s HILARIOUS response to why she doesn’t date younger guys will crack you up.
CELEBRITIES・23 DAYS AGO
WKBN

Actor and producer Heath Freeman, known for his roles in "NCIS" and "Bones," has died at the age of 41, his manager announced Tuesday.
CELEBRITIES・10 DAYS AGO
Hello Magazine

Michael Strahan couldn't have been prouder on Wednesday as he celebrated his twin daughters' 17th birthday. The Good Morning America star took to Instagram to share several photos of himself with his daughters Sophia and Isabella, alongside a heartfelt message. The former football star wrote: "Happy birthday to my babies!...
FAMILY RELATIONSHIPS・28 DAYS AGO

Willow Smith kicked off her 21st birthday with an epic Halloween party in a costume that made fans lose it. The Whip My Hair crooner looked beyond stunning as she transformed into Brad Pitt’s Fight Club character Tyler Durden for the fete, giving the look a high-fashion twist we won’t soon forget.
BEAUTY & FASHION・25 DAYS AGO
HollywoodLife

Angelina Jolie took two of her kids, Shiloh and Pax, to the premiere of a French photographer’s documentary on Nov. 18, and they all posed together on the red carpet. Shiloh Jolie-Pitt, 15, stepped out for another red carpet appearance on Nov. 18. This time, she joined her mom, Angelina Jolie, and older brother, Pax Jolie-Pitt, 17, at the premiere of French photographer, JR’s, documentary, Paper & Glue, at the Museum of Tolerance in Los Angeles. The trio posed for photos with JR before the big event, with Angelina and Pax standing to one side of the artist and Shiloh standing solo on the other.
LOS ANGELES, CA・7 DAYS AGO
thedigitalfix.com

Two of Arnold Schwarzenegger’s five children have followed in his acting footsteps – Patrick Schwarzenegger and Joseph Baena. And five years ago, Baena recreated one of his father’s most memorable scenes from 1991’s Terminator 2: Judgement Day. Now on the set of his new movie, Baena is once again channeling his famous father.
MOVIES・5 HOURS AGO
Hello Magazine

David Muir quietly rang in his 48th birthday on 8 November but there was one person who wasn't going to let his special day go unnoticed. The World News Tonight anchor avoided his Instagram feed, however, he did appear on someone else's. David's ABC colleague, Deborah Roberts - who is...
WORLD・17 DAYS AGO
People

John Travolta and his son hit the beach for Halloween. On Sunday, the actor, 67, posted a selfie on Instagram featuring his son Ben, who turns 11 later in November, as they smiled on a beach during a cloudy day. He wrote in the caption, "Happy Halloween everybody! 🎃 What was your favorite candy bar growing up at Halloween?"
CELEBRITIES・24 DAYS AGO
romper.com

Sarah Jessica Parker is intensely protective of her life with her family. As a mom of three, she has managed to keep photos of her children private over the past two decades. But that doesn’t mean she can’t share a special photo or two herself, particularly on a big day. And particularly when that photo accompanies a truly meaningful message to the child in question. In honor of his 19th birthday, the Sex and the City actress shared a message to her son James that was full of that special blend of love, pride, and melancholy moms of teenagers will recognize all too well.
FAMILY RELATIONSHIPS・29 DAYS AGO
HollywoodLife

Mark Wahlberg is officially the best girl dad ever as he let his 11-year-old daughter, Grace, paint his nails in a cute new video. Mark Wahlberg, 50, proved he is the best girl dad when he posted a video of himself after his 11-year-old daughter, Grace, painted his nails. In the video, Mark said to the camera, “I thought Halloween was over…she got me again,” as he held up his hand which was covered in extremely long pointed tips with black spiderwebs painted on them.
BEHIND VIRAL VIDEOS・23 DAYS AGO
TVOvermind