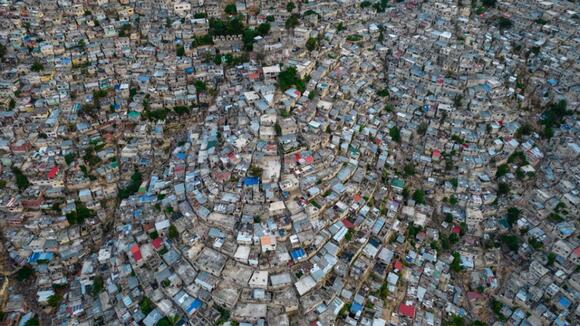 SAN JUAN, Puerto Rico (AP) — A group of 17 U.S. missionaries including children was kidnapped by a gang in Haiti on Saturday, according to a voice message sent to various religious missions by an organization with direct knowledge of the incident.

The missionaries were on their way home from building an orphanage, according to a message from Ohio-based Christian Aid Ministries.

“This is a special prayer alert,” the one-minute message said. “Pray that the gang members would come to repentance.”

The message says the mission’s field director is working with the U.S. Embassy, and that the field director’s family and one other unidentified man stayed at the ministry’s base while everyone else visited the orphanage.

No other details were immediately available.

A U.S. government spokesperson said they were aware of the reports on the kidnapping.

“The welfare and safety of U.S. citizens abroad is one of the highest priorities of the Department of State,” the spokesperson said, declining further comment.

Haiti is once again struggling with a spike in gang-related kidnappings that had diminished after President Jovenel Moïse was fatally shot at his private residence on July 7, and following a 7.2-magnitude earthquake that struck southwest Haiti in August and killed more than 2,200 people.

Gangs have demanded ransoms ranging from a couple hundred dollars to more than $1 million, according to authorities.

Last month, a deacon was killed in front of a church in the capital of Port-au-Prince and his wife kidnapped, one of dozens of people who have been abducted in recent months.

At least 328 kidnapping victims were reported to Haiti’s National Police in the first eight months of 2021, compared with a total of 234 for all of 2020, according to a report issued last month by the United Nations Integrated Office in Haiti known as BINUH.

Gangs have been accused of kidnapping schoolchildren, doctors, police officers, busloads of passengers and others as they grow more powerful. In April, one gang kidnapped five priests and two nuns, a move that prompted a protest similar to the one organized for this Monday to decry the lack of security in the impoverished country.

“Political turmoil, the surge in gang violence, deteriorating socioeconomic conditions – including food insecurity and malnutrition – all contribute to the worsening of the humanitarian situation,” BINUH said in its report. “An overstretched and under-resourced police force alone cannot address the security ills of Haiti.”

On Friday, the U.N. Security Council voted unanimously to extend the U.N. political mission in Haiti.

The kidnapping of the missionaries comes just days after high-level U.S. officials visited Haiti and promised more resources for Haiti’s National Police, including another $15 million to help reduce gang violence, which this year has displaced thousands of Haitians who now live in temporary shelters in increasingly unhygienic conditions.

Among those who met with Haiti’s police chief was Uzra Zeya, U.S. under secretary of state for civilian security, democracy, and human rights.

An Ohio-based church organization says two of 17 abducted members of a missionary group have been freed in Haiti. Christian Aid Ministries issued a statement Sunday saying the two “are safe, in a good spirits and being cared for.”. “We cannot provide or confirm the name of those released,” the...
PUBLIC SAFETY・13 DAYS AGO
Fox 19

MILLERSBURG, Ohio (WOIO) - Two of the Northeast Ohio based missionaries kidnapped by a notoriously violent gang in Haiti have been freed. Christian Aid Ministries out of Holmes County issued a statement to 19 News on Sunday saying in part, “We are able to report that the two hostages who were released are safe, in good spirits and being cared for.”
HOLMES COUNTY, OH・13 DAYS AGO
hngn.com

It has been revealed that agents from Israel's espionage organization Mossad persuaded Iranian scientists to damage the nuclear plant where they worked by carrying explosives disguised as food boxes. The plant's own internal power system, which powered centrifuges for enriching uranium and was shielded underground by 20 feet of reinforced...
INDUSTRY・2 DAYS AGO
Esquire

United States’ satellites are constantly under attack, and China may become the dominant space power by the end of the decade, according to a Space Force general.“The threats are really growing and expanding every single day. And it’s really an evolution of activity that’s been happening for a long time,” General David Thompson, the Space Force’s first vice chief of space operations, told the Washington Post.“We’re really at a point now where there’s a whole host of ways that our space systems can be threatened.”The United States must deal with “reversible attacks” on satellites – those which do not...
MILITARY・2 DAYS AGO
Radar Online.com

A man from Spokane, Washington, Taylor Allen, was arrested in Mexico after allegedly murdering his girlfriend Sativa Transue during the couple's Thanksgiving trip abroad. Transue was found dead in their hotel room by a maid after guests at the hotel "heard screams in the middle of the night," according to Front Page Detective.
PUBLIC SAFETY・2 DAYS AGO
Telegraph

Agents from Israel’s spy agency Mossad recruited Iranian scientists to sabotage the nuclear facility where they were employed by smuggling in explosives disguised as boxes of food, it has been reported. The explosion at the Natanz nuclear facility in April completely destroyed the plant’s independent internal power system, which powered...
INDUSTRY・2 DAYS AGO
Insider

Gangsters used a truck fitted with a homemade ram to burst into a prison and breakout a Mexican crime boss, report says

Gangsters used a convoy of vehicles to smash into a prison in Tula, Mexico. Reports say that nine people, including a gang leader, escaped.
PUBLIC SAFETY・1 DAY AGO

The boyfriend of a woman from Washington, who was found dead in her Cancun hotel room, has been arrested for her murder. Sativa Transue, 26, and her boyfriend Taylor Allen, 31, were vacationing for the Thanksgiving holiday in Cancun, Mexico.A hotel worker found her inside her room on 27 November and called 911 to report an unconscious woman. According to the Mexican police, Transue was killed the previous night, on 26 November. Her boyfriend had been drinking and allegedly beat her to death, reported Law & Crime. The motive has not yet been ascertained.Her mother, Jayme Bolieu, said her...
PUBLIC SAFETY・2 DAYS AGO
The Guardian

Bill to fund government through mid-February wins Senate report while US adds 210,000 jobs in November
PUBLIC HEALTH・1 DAY AGO
theaviationgeekclub.com

As 388th TFW Vice Commander Col Jack Broughton put it, ‘I had been shot down by our own people’. To avoid the possible entrance of Chinese or Soviet forces into the Vietnam War, Washington tightly controlled these bombing operations. Limitations imposed included no bombing in the “sanctuaries” around Hanoi (the capital of North Vietnam), Haiphong (North Vietnam’s main port), and a buffer zone along the Chinese border. Moreover, many types of targets remained off limits early in the campaign, including enemy airfields, surface-to-air missile (SAM) sites and petroleum facilities.
MILITARY・1 DAY AGO
Reuters

TEGUCIGALPA, Dec 2 (Reuters) - The government of incoming Honduran president Xiomara Castro does not plan to establish diplomatic ties with China as it prioritizes U.S. relations, a high-ranking ally of Castro said on Thursday, signaling a reversal of her pre-election stance. Before Sunday's presidential election, which Castro appears to...
FOREIGN POLICY・2 DAYS AGO

An object exploded Saturday in the night sky near the Iranian nuclear facility in the town of Natanz, with state television saying it was a missile exercise.
MIDDLE EAST・15 HOURS AGO
tucsonpost.com

More than 1,000 American National Guard troops will soon be shipped to Eastern Africa for a counter-terrorism mission, intended to shore up US bases dotting the region amid a series of ongoing combat and training operations. The military announced the upcoming deployment in a statement earlier this week, saying that...
MILITARY・3 DAYS AGO
Washington Times

The State Department on Friday warned China that it risks military action from the United States in response to Chinese coast guard efforts to block the resupply of a Philippines island outpost. The department said in a statement that the Chinese coast guard operation Tuesday blocking Philippine resupply ships and...
MILITARY・15 DAYS AGO
Washington Post

JALALABAD, Afghanistan — The Taliban has expanded its shadowy war against the Islamic State branch in Afghanistan, deploying hundreds more fighters to this eastern province in an increasingly violent fight and critical test of the group’s counterterrorism abilities after the U.S. troop withdrawal. More than 1,300 additional Taliban fighters have...
MILITARY・12 DAYS AGO

Capt. Scott B. Curtis told The New York Times most people in the military agree "torture is wrong." Curtis wrote a letter condemning the torture a Guantanamo Bay detainee went through. The letter, signed by seven senior military officials, called it a "stain" on the US' "moral fiber." A Navy...
MILITARY・28 DAYS AGO
Newsweek

In this daily series, Newsweek explores the steps that led to the January 6 Capitol Riot. Joint Chiefs Chairman Army General Mark Milley spent December 4 at the White House, attending meetings with the national security team and principals—all the while, thinking he'd be fired. The chain of command, and the entire national security leadership had been disrupted.
POTUS・1 DAY AGO
Reuters

Quds force chief says U.S."teeth will be crushed" if it moves against Iran

VIENNA, Dec 2 (Reuters) - The commander of Iran's elite Quds Force on Thursday warned the United States its "teeth will be crushed" if Washington makes the slightest move against Tehran, state media said, as indirect talks are being held to rescue a 2015 nuclear accord. "This nation's power and...
WORLD・3 DAYS AGO
Washington Examiner

The New York Times has admitted that the Black Lives Matter looting in cities such as Minneapolis, along with soft-on-crime policies, is responsible for the widespread organized robberies that businesses are seeing across the country. Reporters Michael Corkery and Sapna Maheshwari wrote for The New York Times that some of...
LAW ENFORCEMENT・1 DAY AGO