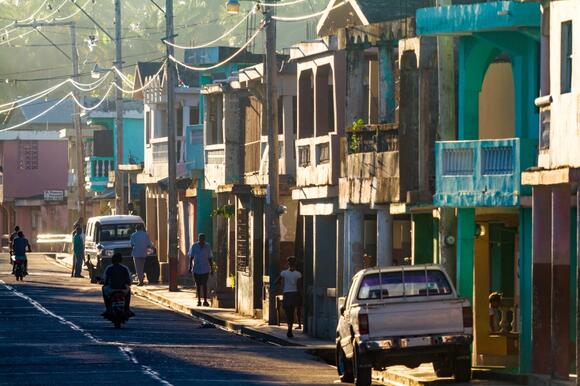 SAN JUAN, Puerto Rico (AP) — A group of 17 U.S. missionaries, including children, was kidnapped by a gang in Haiti on Saturday, according to a voice message sent to various religious missions by an organization with direct knowledge of the incident.

The missionaries were on their way home from building an orphanage, according to a message from Ohio-based Christian Aid Ministries.

Meteorite crashes down on sleeping woman’s bed, missing by inches

“This is a special prayer alert,” the one-minute message said. “Pray that the gang members would come to repentance.”

The message says the mission’s field director is working with the U.S. Embassy, and that the field director’s family and one other unidentified man stayed at the ministry’s base while everyone else visited the orphanage.

No other details were immediately available.

A U.S. government spokesperson said they were aware of the reports on the kidnapping.

“The welfare and safety of U.S. citizens abroad is one of the highest priorities of the Department of State,” the spokesperson said, declining further comment.

Haiti is once again struggling with a spike in gang-related kidnappings that had diminished after President Jovenel Moïse was fatally shot at his private residence on July 7, and following a 7.2-magnitude earthquake that struck southwest Haiti in August and killed more than 2,200 people.

Gangs have demanded ransoms ranging from a couple hundred dollars to more than $1 million, according to authorities.

Last month, a deacon was killed in front of a church in the capital of Port-au-Prince and his wife kidnapped, one of dozens of people who have been abducted in recent months.

At least 328 kidnapping victims were reported to Haiti’s National Police in the first eight months of 2021, compared with a total of 234 for all of 2020, according to a report issued last month by the United Nations Integrated Office in Haiti known as BINUH.

Gangs have been accused of kidnapping schoolchildren, doctors, police officers, busloads of passengers and others as they grow more powerful. In April, one gang kidnapped five priests and two nuns, a move that prompted a protest similar to the one organized for this Monday to decry the lack of security in the impoverished country.

“Political turmoil, the surge in gang violence, deteriorating socioeconomic conditions – including food insecurity and malnutrition – all contribute to the worsening of the humanitarian situation,” BINUH said in its report. “An overstretched and under-resourced police force alone cannot address the security ills of Haiti.”

On Friday, the U.N. Security Council voted unanimously to extend the U.N. political mission in Haiti.

‘Probable tornado’ touches down in Ohio

The kidnapping of the missionaries comes just days after high-level U.S. officials visited Haiti and promised more resources for Haiti’s National Police, including another $15 million to help reduce gang violence, which this year has displaced thousands of Haitians who now live in temporary shelters in increasingly unhygienic conditions.

Among those who met with Haiti’s police chief was Uzra Zeya, U.S. under secretary of state for civilian security, democracy, and human rights.

Two of the 17 U.S. missionaries abducted in Haiti have been freed, Christian Aid Ministries says

PORT-AU-PRINCE, Haiti — Two of 17 abducted members of a missionary group have been freed in Haiti and are safe, “in good spirits and being cared for,” their Ohio-based church organization announced Sunday. Christian Aid Ministries issued a statement saying it could not give the names of those released, why...
PUBLIC SAFETY・15 DAYS AGO
fox4now.com

2 missionaries from US organization freed after being kidnapped in Haiti

PORT-AU-PRINCE, Haiti — Christian Aid Ministries confirmed Sunday that two of the 17 missionaries kidnapped in Haiti last month have been freed. “We have learned that two of the hostages in Haiti were released. We praise God for this! Only limited information can be provided, but we are able to report that the two hostages who were released are safe, in good spirits, and being cared for,” the organization said in a statement.
WORLD・14 DAYS AGO
Washington Post

PORT-AU-PRINCE, Haiti — Two of the 17 foreign missionaries who were kidnapped by a notorious street gang in Haiti last month have been released, a U.S. aid group said Sunday. “Only limited information can be provided, but we are able to report that the two hostages who were released are...
PUBLIC SAFETY・14 DAYS AGO
WTRF- 7News

A religious group based in Ohio has announced that a violent gang in Haiti has released three more hostages, while another 12 remain abducted. The statement Monday from Christian Aid Ministries said the people were released on Sunday in Haiti and are “safe and seem to be in good spirits.” The group provided no further […]
OHIO STATE・5 HOURS AGO

Two of 17 people being held captive in Haiti have been released, according to the organization who sponsored the missions trip. Christian Aid Ministries, based in Holmes County, announced on its website Sunday the "two hostages who were released are safe, in good spirits and being cared for." The organization...
HOLMES COUNTY, OH・13 DAYS AGO
Miami Herald

Three more Christian missionaries who have been held hostage in Haiti for more than seven weeks have been released, Christian Aid Ministries said Monday. The group, released Sunday evening, were among 17 U.S. and Canadian missionaries who were kidnapped in Haiti on Oct. 16. Two other hostages, an American husband and wife, were freed on Nov. 22 due to illness without a ransom being paid, a source told the Miami Herald at the time.
PUBLIC SAFETY・5 HOURS AGO
Praise 94.5 Cleveland

According to NBC4i, an Ohio-based church organization says two of 17 abducted members of a missionary group have been freed in Haiti. Christian Aid Ministries issued a statement Sunday saying the two “are safe, in good spirits and being cared for.”. “While we rejoice at this release, our hearts are...
OHIO STATE・14 DAYS AGO
AFP

Three of 17 North Americans kidnapped in Haiti in October have been freed, their church group said on Monday. The missionaries and family members -- a group of 16 Americans and one Canadian -- were abducted while returning from an orphanage in an area east of the capital Port-au-Prince controlled by one of Haiti's most powerful crime gangs. Two of them were released in November, leaving 12 currently still in captivity. Christian Aid Ministries, which is based in the US state of Ohio, has said the hostages were 12 adults aged 18 to 48, and five children ranging in age from eight months to 15 years.
PUBLIC SAFETY・3 HOURS AGO

WASHINGTON, D. C. -- The Assistant Secretary of State for Western Hemisphere Affairs told U.S. Sen. Rob Portman earlier this week that he’s been personally involved in trying to recover 15 Christian missionaries from an Ohio organization who were kidnapped in Haiti six weeks ago. During a Senate Foreign Relations...
OHIO STATE・5 DAYS AGO
abc17news.com

DAJABON, Dominican Republic (AP) — More than 31,000 people have been deported by the Dominican Republic to Haiti this year, more than 12,000 of them in just the past three months — a huge spike, observers say. As the rest of the world closes its doors to Haitian migrants, the country that shares an island with Haiti also is cracking down in a way that human rights activists say hasn’t been seen in decades. The increasing mistreatment of the country’s Haitians, they say, coincided with the rise of Luis Abinader, who took office as president in August 2020. They accuse the government of targeting vulnerable populations, separating children from their parents and racial profiling.
IMMIGRATION・1 DAY AGO
Washington Post

Three more of the 17 missionaries who were kidnapped by a notorious gang in Haiti more than a month ago have been released, Ohio-based Christian Aid Ministries said Monday. The three “seem to be in good spirits,” the organization said in a statement. Two other members of the group were released last month; 12 remain in captivity.
PUBLIC SAFETY・5 HOURS AGO
NBC4 Columbus

PORT-AU-PRINCE, Haiti (AP) — A religious group based in Ohio announced Monday that a violent gang in Haiti has released three more hostages, while another 12 remain abducted. The statement from Christian Aid Ministries said the people were released on Sunday in Haiti and are “safe and seem to be in good spirits.” The group […]
PUBLIC SAFETY・5 HOURS AGO

NYU’s Center for Latin American and Caribbean Studies discussed an ongoing surge of Haitian migration at the U.S. southern border at a Nov. 22 event. The teach-in session, called Haitian Migration Beyond The News Cycle, focused on the United States’ historically racist treatment of Haitian immigrants, current U.S. policies towards Haiti, and the root of the current crisis.
IMMIGRATION・5 DAYS AGO
WashingtonExaminer

Haiti Kidnapping Update: Gang Releases 3 More Of The US Hostages, 12 Remain In Captivity

Three more members of the Christian missionary group kidnapped by a notorious gang in Haiti have been released, the organization said Monday. A total of 17 people was kidnapped on Oct. 16. There now have been five people released altogether. On Nov. 21, the gang released two members, which leaves 12 people still in their captivity.
PUBLIC SAFETY・33 MINUTES AGO
Shore News Network

TAPACHULA, Mexico (Reuters) – Several thousand Haitian migrants have camped outside a stadium in the southern Mexican city of Tapachula, pleading to be transferred to other states and given authorization to travel freely through Mexico and seek employment. Mexican officials last week began moving hundreds of migrants to other states...
IMMIGRATION・4 DAYS AGO

TAPACHULA (Reuters) – Several thousand Haitian migrants on Monday clustered outside a stadium in southern Mexico that has been re-purposed into a migration office, urging authorities to let them pass freely through Mexico. Two caravans of migrants largely from Haiti and Central America have departed from the southern city of...
IMMIGRATION・13 DAYS AGO
Black Enterprise

Haitian activist Monique Clesca, is calling for the Biden Administration and other global powers to allows “Haitians to save our own country” from the ongoing political turmoil that has deteriorated into rampant gang violence. Clesca, a journalist and former U.N. official, is one of 13 members of the Commission to...
U.S. POLITICS・1 DAY AGO
Reuters

MEXICO CITY, Nov 20 (Reuters) - Migrants from 12 countries were among 600 people found hidden in the back of two trucks in eastern Mexico on Friday, most of them from neighboring Guatemala, the government's National Migration Institute (INM) said on Saturday. The INM said 401 of the people were...
IMMIGRATION・15 DAYS AGO
IFLScience

A baby boy in Brazil has been born with a 12-centimeter-long (5 inches) "true" human tail, which are extremely rare with only 40 cases reported in scientific literature. The new case is described in the Journal of Pediatric Case Reports. The boy, who has been kept anonymous in the report,...
AMERICAS・27 DAYS AGO