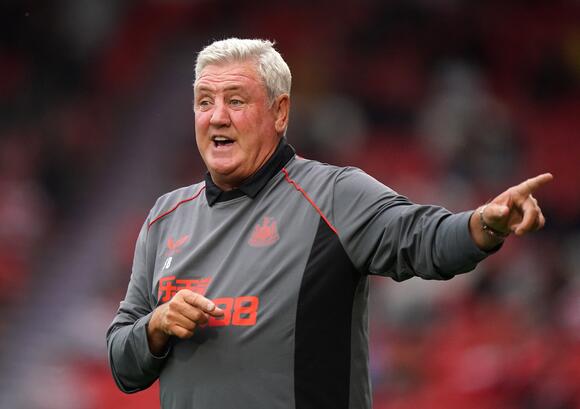 Steve Bruce ’s son Alex says the Newcastle United manager has been used as a “fall guy” during his time at the club and “has been battered since the moment he walked in the door.”

The visit of Tottenham Hotspur on Sunday afternoon sees Steve take charge of his 1,000th fixture in management, at the beginning of his third full season in charge of the Magpies. Macclesfield centre-back Alex, who was signed by his father for Hull City in 2012, explained that he has found witnessing the criticism Bruce has faced since joining Newcastle difficult.

“It’s been tough. I wouldn’t sit here and lie and say it hasn’t, it’s been really tough to watch the criticism,” Alex Bruce told BBC Radio 5 Live’s Football Daily podcast. “Since he took the job, I think the lack of respect that has been shown, considering he’s done 1,000 games, has been unbelievable.”

“A lot of things have been said about my dad, and I feel a bit naff sticking up for him, but I would genuinely say for anyone who has done 999 games as a manager, 980-odd as a player, to see certain individuals question his integrity, his professionalism, his ability as a manager, questioning things like his warm-ups, his substitutions… they all make mistakes, but has he not deserved a crack?

The 37-year-old went on to defend the jobs his father has done in charge of some of the Premier League’s less wealthy football clubs.

“He’s never had the opportunity at managing a club who can go and spend proper money,” Alex Bruce said. “He’s managed teams in the Premier League like Wigan, Birmingham, Hull City… his win ratio in the Premier League has been questioned umpteen times - do people really expect massive win percentages when you’re managing clubs like that?

“I don’t think so. I think when you’re a level-headed and intelligent person, you look at the bigger picture. I think he’s done a very good job at all the clubs he’s managed, and I think he deserves a crack. Some of the disrespect he’s been shown has been hard to watch.”

Steve Bruce took over at St. James’ Park in 2019 following the departure of former manager Rafael Benítez, an enormously popular figure with the home crowd, and his job has been consistently under threat since then.

Now that the club has been taken over the Saudi Arabian Public Investment Fund, A glut of mangers have been linked with his role, including Graham Potter and Unai Emery, and Alex explained that his father had been expecting significant pressure from media and fans when he signed his first contract.

“He knew that was going to be the case from the day he took the job,” he said. “He had an owner who was trying to sell the club, he had an owner who didn’t really want to put any money of his own into the club for a number of reasons, he could only use the money that the club generated and with the pandemic there wasn’t any money there.

“He has been the fall guy. The amount of times I’ve said to him ‘why don’t you let someone else do the press?’ and he just says ‘because I’m the manager, it’s my responsibility’.”

Alex also highlighted his father’s affection for the club, and believes that his boyhood support for the club should have seen him cut more slack than has been the case thus far.

“I know for a fact, no matter what people say, what Newcastle means to him as a fella. He used to crawl under the turnstiles, stand there when he was a kid with his dad, he’s always supported the club.

“No matter what you say about my dad, he thinks a lot of the club and he knows more than anybody that this new ownership has needed to happen and believe me, he is absolutely delighted that it has, not just for the football club, but for the city and the supporters as well.”

Birmingham City defender Kristian Pedersen has revealed how Steve Bruce really wanted to sign him last summer, as the former Newcastle United boss tried - ultimately in vain - to turn around the club's fortunes. Before the Suadi Public Investment Fund's takeover, Bruce was restricted in terms of who he...
PREMIER LEAGUE・14 DAYS AGO
Sunderland Echo

Bruce left St James’s Park last month after his team made a disastrous start to the Premier League season. Fans had been calling for him to go for weeks – there were chants of “we want Brucie out” this season – and the decision was taken after a shambolic 3-2 home defeat to Tottenham Hotspur.
PREMIER LEAGUE・10 DAYS AGO
SPORTbible

Steve Bruce would be 'very keen' on an interim role at Manchester United and believes he would be able to stabilise the dressing room if he takes over. After weeks of speculation surrounding his future, it was confirmed on Sunday morning that Solskjaer's time at Old Trafford was officially up following their 4-1 defeat to Watford at Vicarage Road.
PREMIER LEAGUE・11 DAYS AGO
FanSided

Manchester United fans reaction to Steve Bruce: As expected or not?

Manchester United, on Sunday, publicised the sacking of three-year reigning manager and club legend, Ole Gunnar Solskjaer. Following the decision, it was then reported that other club legend and former Newcastle United boss, Steve Bruce, has put his name forward to take control of the club in the short-team stretch and until they attain their long-term solution.
PREMIER LEAGUE・9 DAYS AGO

Bruce left Newcastle United last month following a disastrous – and winless – start to the Premier League season. The 60-year-old – who led Man United to the Premier League title during his playing career – suggested at the time that the Newcastle job would be his last in management, though he added: “Never say never, I’ve learnt that.”
PREMIER LEAGUE・8 DAYS AGO
fourfourtwo.com

Manchester United: Steve Bruce offered to the club by agent, according to reports

Manchester United have been offered Steve Bruce for the position of interim manager by his agent, according to reports. Former United defender Bruce won the first Premier League title as captain at Old Trafford - and now, his agent is apparently keen to offer his services to his former side, who are in need of a temporary fix.
PREMIER LEAGUE・8 DAYS AGO
punditarena.com

When Thomas Tuchel comes in after games and scans the other results, he doesn’t automatically go to Liverpool or Manchester City. At least not yet.“There are some teams behind us who show consistency, who show quality, who show determination,” the Chelsea manager said last week. “This is what it is. You have a right to be proud of your competition here, in the Premier League, and for us it feels good because we are in the middle of that race and we want to stay here. I don’t know if it will settle down.”There is a bit of a...
PREMIER LEAGUE・2 DAYS AGO
The Independent

Liverpool are hoping to compound Everton’s misery when they travel to Goodison Park for the Merseyside derby this evening. Jurgen Klopp’s side are on a terrific run of form, having beaten Arsenal and Porto before thrashing Southampton last weekend all in the space of eight days. FOLLOW LIVE: Everton vs Liverpool – latest updatesLiverpool came into the midweek round of fixtures just two points adrift of leaders Chelsea and have already scored 39 goals in 13 Premier League games this season. However, for Everton, fortunes are far bleaker. Rafael Benitez is under increasing pressure after the Toffees limped to a...
PREMIER LEAGUE・1 DAY AGO
Tribal Football

Newcastle boss Eddie Howe: It's been a really good 10 days

Newcastle United boss Eddie Howe is happy with his first days at the club. Howe will debut as Toon manager against Brentford on Saturday. Howe said: "Really good 10 days, thoroughly enjoyed it and the players have responded well. "We have covered a lot and will try to implement philosophy...
PREMIER LEAGUE・13 DAYS AGO
BBC

Newcastle's managing director Lee Charnley has left the club after seven years in the role. Charnley, who has been with the club for 22 years, completed a handover period with the new Saudia Arabia-backed owners following their takeover. Newcastle have begun a formal recruitment process to appoint a new CEO.
PREMIER LEAGUE・13 DAYS AGO

Defender Paul Dummett is Newcastle's only confirmed absentee for Eddie Howe's first game in charge. Miguel Almiron will be assessed following his return from international duty, while goalkeeper Martin Dubravka made his first competitive appearance of the season for Slovakia on Sunday. Brentford's Mathias Jensen is available after serving his...
PREMIER LEAGUE・13 DAYS AGO
SPORTbible

Ole Gunnar Solskjaer Has Officially Been Sacked By Manchester United

Manchester United have confirmed Ole Gunnar Solskjaer has 'left his role as manager' following the club's embarrassing defeat to Watford. Solskjaer has been relieved of his managerial duties at Old Trafford after losing 4-1 at Watford on Saturday. The humiliating Premier League defeat leaves them in seventh place, 12 points...
PREMIER LEAGUE・11 DAYS AGO
BBC

Carrick says United has been his life for 'a long time'

Michael Carrick took the opportunity to thank Ole Gunnar Solskjaer and wish him all the best, as he spoke for the first time as caretaker boss of Manchester United following the Norwegian's sacking on Sunday. Carrick - who was a team-mate of Solskjaer's at Old Trafford and worked under him...
PREMIER LEAGUE・10 DAYS AGO
FanSided

Is Newcastle United’s past the future of Everton

With Everton seemingly in crisis again and the season in a tailspin, is the past of another Premier League club going to be the future for the Blues?. The club I’m thinking of is Newcastle United and I fear that Everton are beginning to increasingly resemble the Tyneside club’s struggles, at least before their dramatic and controversial takeover this season.
PREMIER LEAGUE・9 DAYS AGO
Sunderland Echo

Willock joined the club on a permanent deal in the summer after a successful half-season loan on Tyneside last term. Newcastle take on Arsenal tomorrow looking for their first Premier League win of the season, and Arteta was asked about the £20million-plus sale of Willock, 22, ahead of the game.
PREMIER LEAGUE・7 DAYS AGO
The Independent

John Sillett, fondly known as ‘Snoz’ throughout the world of football because of his large nose, will forever be remembered for leading Coventry to FA Cup glory in 1987.The nickname suited the larger than life Sillett as he certainly had a nose for drama during a career that began at Chelsea and reached its zenith when the unfancied Sky Blues won the cup by beating Tottenham 3-2 in thrilling fashion at Wembley.It remains the only major honour in Coventry’s 138-year history.Sillett, who has died at the age of 85, said his great pal and former Chelsea team-mate Jimmy Greaves coined...
PREMIER LEAGUE・2 DAYS AGO
The Independent

Chelsea are taking on Watford this evening at Vicarage Road as the Blues aim to maintain their spot at the top of the table.All three of the title race contenders are in action tonight and all three face testing away trips: second-place Manchester City travel to Steven Gerrard’s rejuvenated Aston Villa, while Liverpool face a Merseyside derby with Everton at Goodison Park.FOLLOW LIVE: Watford vs Chelsea – latest updatesChelsea’s fixture is on paper the easiest of the three, but Watford have shown promise recently under Claudio Ranieri, particularly going forwards with the threats of Emmanuel Dennis, Ismaila Sarr and Josh King...
PREMIER LEAGUE・1 DAY AGO
San Diego Union-Tribune