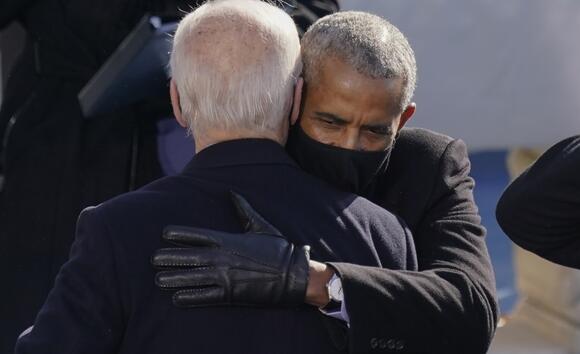 Still acclimating to the post-White House political spotlight, former President Barack Obama is back ginning up enthusiasm for President Joe Biden and other Democrats as the incumbent struggles to unite his party and the country behind his sprawling liberal agenda.

Most Democrats have welcomed Obama's reemergence following a break after his book tour. But his presence raises questions about Biden's ability to lead the party as infighting threatens to derail his priorities, including climate action, in Congress.

Top Democrats have realized they do not have the luxury of worrying about Biden’s feelings if his old boss overshadows him on the campaign trail, according to political analyst Dan Schnur.

"Obama is the most popular politician in the country right now, and any Democratic candidate who is relying on support from swing voters needs him. This is what’s happening in Virginia right now, but next year you’ll see Obama campaigning in these key districts in addition to, or instead of, Biden," the Republican-turned-independent, now at the University of California, said.

The former president also has cachet with climate activists and others Biden has had trouble keeping motivated. Obama is one of many U.S. officials being dispatched to Glasgow in a demonstration to the world that the country can spearhead the issue, despite Democratic bickering over Biden's $2 trillion social welfare and climate spending package. But Obama's schedule, which includes meeting "with young activists engaged in the climate fight" and delivering remarks "putting the threat of climate change in broader context," adds credibility to the U.S. case and papers over Biden's weaknesses with young people. International climate envoy John Kerry conceded this week, for instance, that Biden and congressional Democrats' inaction “hurts” them with their foreign counterparts.

One month after breaking ground at his presidential library site in Chicago, Democratic gubernatorial nominees Terry McAuliffe of Virginia and Phil Murphy of New Jersey announced this week that Obama would canvass with them before their off-year Nov. 2 elections. Obama will then jet off to Scotland for the United Nations' 26th climate summit five years after his signature environmental agreement, the Paris accord, went into effect.

Obama is stumping with McAuliffe because "he is the only candidate in this race that will lead the Commonwealth out of this pandemic and keep Virginia’s economy strong," the invitation to their Oct. 23 Richmond rally reads. But it was circulated one week after McAuliffe told what he thought was a private video teleconference that Biden "is unpopular today unfortunately here in Virginia, so we have got to plow through." McAuliffe's closer-than-expected contest against Republican Glenn Youngkin after Biden swept Virginia less than a year ago has Democrats rattled about the 2022 midterm elections.

Biden's popularity is dissipating. His average job approval rating is 44%, while his disapproval rating is 52%, according to RealClearPolitics . At roughly the same point in his presidency, Obama was at 52% approval and 41% disapproval . His average approval over his two terms in office was 48% and his disapproval was 47%. Biden was also elected for his calming influence compared to former President Donald Trump, a quality that has at times handicapped his efforts to capture the electorate's attention.

The White House has downplayed links between Biden and the Virginia governor's race. But press secretary Jen Psaki acknowledged this week the "alignment" between the older white male centrist Democrats, "whether it is the need to invest in rebuilding our roads, rails, and bridges, or making it easier for women to rejoin the workforce." McAuliffe, a former Virginia governor, Democratic National Committee chairman, and Clinton family ally, decided to run for a second nonconsecutive term after Biden solidified his position as the 2020 presidential nomination frontrunner.

"There's a lot of history here in Virginia," Psaki said. "But, again, we're going to do everything we can to help former Gov. McAuliffe, and we believe in the agenda he’s representing."

After suggesting Biden was a drag on his ticket, McAuliffe alluded to a campaign event following up from the pair's last appearance together in July. Psaki did not have details regarding the gathering this week, but first lady Jill Biden did fly to Richmond on Friday.

"McAuliffe is in trouble — and he knows it," Republican National Committee spokesman Jacob Schneider said. "If this election is a harbinger of what is to come, Democrats have every reason to be worried."

Obama and Biden have a complicated relationship beyond the "bromance" promoted over the course of their administration. Obama counseled Biden that he did not have to vie for the presidency, and declined to weigh in during the lengthy primary. Obama has been judicious, too, about speaking publicly since leaving the White House out of respect to Biden and Trump.

"Obviously, the current president [and] the former president are friends, and they engage on a regular basis," Psaki said last month.

Calling in Obama to help a Stagnant economy Is like calling Casey Anthony when you feel like you need babysitting advice......

Hussein obama needs to go back to whatever shithole he crawled out of. His presidency marked the beginning of american decline

Obama is the most popular politician? no, Obama put us in this mess. between him and Joey, they have set us back, so we can be equal to third world countries for their one world agenda

Majority see Biden out by 2024, fear Harris not ‘qualified’

Mark Meadows baselessly claimed in his memoir that Biden's 81 million votes in the 2020 election don't constitute "a real number." He parroted Trump's broad and unspecified claims that the election was rigged and stolen. Meadows repeatedly pressured state and national officials to investigate conspiracy theories after the election. Former...
PRESIDENTIAL ELECTION・1 HOUR AGO

More voters would back former President Donald Trump than President Joe Biden in a hypothetical match-up if the 2024 election were held today, according to a new Harvard CAPS-Harris Poll survey released exclusively to The Hill.
PRESIDENTIAL ELECTION・7 HOURS AGO
USA TODAY

While Democrats haggle over policy, Republicans in thrall to Trump are acting out a meaner, more dangerous version of World Wrestling Entertainment.
POTUS・3 HOURS AGO
Newsweek

Capitol riot investigators have found evidence possibly linking the Trump White House to the Justice Department in efforts to overturn the results of the 2020 election.
GEORGIA STATE・21 HOURS AGO

There may be no greater transgression in MAGA-land than refusing to engage in maximal corruption on Donald Trump’s behalf, which is why Trump has now endorsed former Sen. David Perdue, who is challenging Georgia Gov. Brian Kemp. Opinions to start the day, in your inbox. Sign up. Trump has not...
POTUS・6 HOURS AGO
WashingtonExaminer

The Biden administration has failed to meet a congressionally imposed requirement that it share a breakdown of where the Afghanistan evacuation stands, including a detailed listing of whom it airlifted out of Kabul, according to a senior Senate Republican.
FOREIGN POLICY・10 HOURS AGO
POLITICO

BREAKING — A federal judge today set a July 18 date for STEVE BANNON’s trial for contempt of Congress, Kyle Cheney reports. The date essentially splits the difference between the Justice Department’s request for April 15 and Bannon’s ask for Oct. 22. — What this means for the Jan. 6...
U.S. POLITICS・4 HOURS AGO
floridianpress.com

Americans were outraged when President Joe Biden called for the hasty retreat of American Military forces out of Afghanistan last August, a move that left 13 American servicemen and women dead, and billions of dollars in military equipment behind. Military leaders and former military members of the U.S. Congress, including...
MILITARY・1 DAY AGO

A federal judge in Georgia blocked the Biden administration's requirement that all federal contractors must receive the COVID-19 vaccine, the latest blow in a flurry of legal setbacks for the White House.
CONGRESS & COURTS・3 HOURS AGO
WashingtonExaminer

Who's in and who's out? Biden's 'democracy summit' snubs attract criticism

The White House is defending President Joe Biden’s Summit for Democracy from critics and allies who argue the administration is unduly judging other nations without addressing problems at home.
PRESIDENTIAL ELECTION・10 HOURS AGO
Business Insider

Biden lead Trump by one point, 46% to 45%, in a Wall Street Journal poll full of bad news for his agenda and Democrats' chances in 2022.
PRESIDENTIAL ELECTION・2 HOURS AGO
Fox News

Disagreeing with Trump, Vernon Jones says he's 'the only candidate' who can defeat Stacey Abrams in Georgia

Georgia gubernatorial candidate Vernon Jones argues that he’s "the future of the Republican Party." Jones is a former Democratic state representative who switched to the GOP last year after serving as a leading Black surrogate and supporter in Georgia of former President Trump’s reelection campaign. In April, he launched what pundits consider a long-shot primary challenge against GOP Gov. Brian Kemp.
GEORGIA STATE・10 HOURS AGO

Biden 'so weak,' not equipped for face off with Vladimir Putin: Laura Ingraham

Laura Ingraham said China and Russia appeared to be developing a closer relationship under President Joe Biden and argued that the U.S. should be wary about sparring with Russia over Ukraine on "Ingraham Angle" Monday. Discussing a planned call for Tuesday between President Biden and Russian President Vladimir Putin, Ingraham...
PRESIDENTIAL ELECTION・15 HOURS AGO
WashingtonExaminer

Saule Omarova, President Joe Biden's pick for comptroller of the currency, has withdrawn herself from consideration.
PRESIDENTIAL ELECTION・1 HOUR AGO
Reuters

WASHINGTON, Dec 7 (Reuters) - President Joe Biden plans to put forward more nominees for open positions on the U.S. Federal Reserve Board by the end of the month, the White House said on Tuesday. "We hope to have those soon, and we continue to hope to have those out...
PRESIDENTIAL ELECTION・10 MINUTES AGO
Washington Post

Benjamin Ginsberg, a veteran Republican election lawyer, just issued a stark warning to lawmakers in his own party: If you don’t act now to protect our system, the losing candidate in the 2024 presidential election might seek to overturn the will of the people — and succeed. Opinions to start...
PRESIDENTIAL ELECTION・1 DAY AGO