Squid Game: Viewers in stitches as Pete Davidson and Rami Malek give the hit Netflix show a country twist 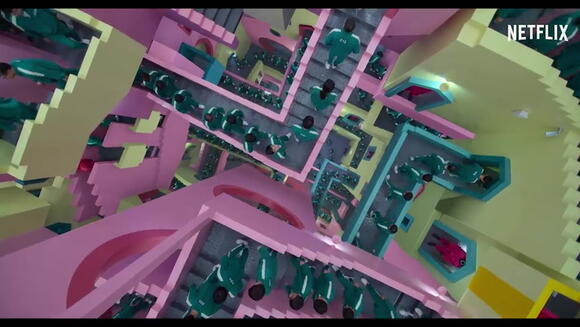 Starring SNL cast regular Pete Davidson and first-time host Rami Malek , the sketch saw the pair deliver a spoof country number – a cover of Branchez & Big Wet’s “Turn Up On the Weekend”. The musicians also appeared in the sketch.

The sketch began with the pair as “country folk” who then become financially ruined – just like the contestants on Squid Game.

The pair then sign up to take part in Squid Game to help pay off their debts. Davidson and Malek can be seen wearing the famous Squid Game tracksuits before they take part in the potentially fatal games, including red light, green light.

“There’s a robot girl who caught me running, better duck behind the nearest guy,” Davidson sang as he ducks for cover behind fellow cast member Chris Redd.

You can watch the video here:

Elsewhere in the show, Daniel Craig made a surprise appearance , appearing alongside his No Time To Die co-star Rami Malek.

Craig took part in a skit about late music icon Prince . Malek and SNL regular Keenan Thompson took part in a “Prince-off” to decide who should play the musician in a fictional biopic – directed by Get Out ’s Jordan Peele .

S NL recently unveiled the cast of its new season , with Beck Bennett and Lauren Holt both leaving the show.

The hosts have been unveiled too with an eclectic line up featuring Owen Wilson – who opened the season – followed by Kim Kardashian, Malek and Jason Sudeikis.

A tourist in LA got more than he bargained for at breakfast when he noticed rumoured celebrity couple Kim Kardashian and Pete Davidson sitting next to him. Paul Barewijk, a music journalist from the Netherlands, was able to make the most out of the encounter and took two selfies - one with Kardashian and another with Davidson.
CELEBRITIES・2 DAYS AGO
Elite Daily

The Jonas Brothers are the first to admit they’re easy to poke fun at. Joe, Nick, and Kevin Jonas made the impressive journey from Disney kids to pop music superstars, and it’s truly been one heck of a rollercoaster. As with any celebrity living in the public eye, the guys have had plenty of flubs, and while they’ve learned to take criticism from fans, their new Netflix special, Jonas Brothers Family Roast, proves the people they really need to watch out for are the ones closest to them. Ahead of the roast’s Nov. 23 premiere on Netflix, the Jonas Brothers dish on what it’s like to be made fun of by their closest friends and fam — and each other.
TV & VIDEOS・13 DAYS AGO
ETOnline.com

Kim Kardashian West and Pete Davidson can't seem to get enough of each other. The loved-up couple was spotted walking hand in hand as they stepped out for a romantic dinner date in Los Angeles on Sunday night. In new photos shared by the Daily Mail, the 41-year-old reality TV...
CELEBRITIES・8 DAYS AGO
Glamour

We've time-traveled back to high school, because the internet is seriously talking about Kim Kardashian allegedly giving Pete Davidson a hickey. The Daily Mail has the photos. You can see them here. In the shots they're giggling like two 17-year-olds passing notes in A.P. Biology. Let me do the journalistic thing and say we have no confirmation this is, in fact, a hickey. This is all fan speculation, fueled by some seriously bonkers tweets:
CELEBRITIES・8 DAYS AGO

Harry Potter is back! Well, sort of. Get ready to binge the film series again, because there’s a new Harry Potter trivia game show hosted by the great Helen Mirren called Harry Potter: Hogwarts Tournament of Houses coming to TBS and Cartoon Network. Not only is more Harry Potter content amazing (even if it’s in the form of a trivia game show), but there are some pretty sweet celebrity guests. The upcoming Harry Potter game show was able to land guests like Tom Felton and Pete Davidson, who is apparently a superfan, and now we know just how the project pulled it off.
TV & VIDEOS・4 DAYS AGO
The Independent

Youtube star MrBeast has created a real-life version of Squid Game by inviting 456 random players to compete in a tournament offering a $456,000 (£342,000) cash prize for the winner. Squid Game explores a dystopian reality, in which a mysterious organisation recruits people in debt to compete in a series of games for the chance to win a life-changing amount of money.The games are based on classic children’s games – some of which are specific to Korea, while others, such as “Red Light, Green Light”, are known worldwide.The internet personality, who boasts 76.2 million subscribers, documented the entire process...
BEHIND VIRAL VIDEOS・6 DAYS AGO
GamesRadar+

Move over, Squid Game: Netflix has a new show that viewers can’t stop talking about

Korean dramas are the talk of television at the moment. Squid Game dominated the streaming conversation for months, and now a fresh challenger has emerged. Enter Hellbound, a new Netflix series that is bound to be the next big watercooler TV show that your friends, family, and co-workers will be begging you to watch very soon.
TV SERIES・9 DAYS AGO
DesignerzCentral

Amal Clooney and Julia Roberts have allegedly been feuding, and George Clooney doesn’t even have the slightest idea. In its Dec. 6 issue, Woman’s Day claimed that Amal and Roberts have met each other a couple of times. And since George and Roberts are filming a movie together, Amal visited her husband and was forced to reunite with his co-star.
CELEBRITIES・9 HOURS AGO

In a preview for the actor’s first on-camera interview since the tragedy, Baldwin says he did not fire the gun that killed Halyna Hutchins
CELEBRITIES・3 HOURS AGO
Cosmopolitan

It looks like pop icon Ariana Grande had a raucously fun time on Thanksgiving with her family and guests. The musician shared a series of photos and videos of everyone enjoying the day, including a rare photo of her husband Dalton Gomez and their dog Toulouse. In the photo, Gomez...
CELEBRITIES・3 DAYS AGO
HipHopDX.com

Kanye West’s appearance on Drink Champs is still a topic of conversation weeks later. Aside from addressing his beef with Drake, impending divorce from Kim Kardashian and a bevy of other topics, he gave Beanie Sigel credit for coining the name “Yeezy” and admitted he’d been trying to pay Sigel for his contribution to the Yeezy brand.
CELEBRITIES・1 DAY AGO
hotnewhiphop.com

Are they or aren't they dating has been the question roaming around social media as it pertains to rumors involving Lil Baby and Saweetie. The pair of rappers have been the talk of social media in recent days after a report alleged that they were seen shopping together. According to Hollywood Unlocked, they broke the story from a source who claimed that there was a video that showed Baby and Saweetie spending a few dollars at a luxury store. In fact, it was reported that Lil Baby dropped $100K on the "Tap In" hitmaker.
CELEBRITIES・1 DAY AGO

We are so close to a brand new episode of NCIS and things look intense. Wilmer Valderrama shared a video message for fans reminding them. It has been a bit since fans caught a new episode. There have been so many teasers and Valderrama’s character, Torres, could be in a bit of trouble. However, the actor himself looks to be in good spirits, albeit tired spirits.
TV & VIDEOS・1 DAY AGO
TVShowsAce

The Wendy Williams Show fans are in an uproar. Celebrity guests have been lining up to fill in her spot as she takes this time to focus on her health. There has been a mix of guest hosts, such as Leah Remini. Yet, fans want Sherri Shepherd back. Some of them are wondering where the former The View co-host has been at lately.
CELEBRITIES・8 HOURS AGO
thebrag.com

Camila Cabello has shared a cryptic quote on social media just one week after announcing her split from fellow artist Shawn Mendes. Posting to Instagram, Camila shared: “You are bones and blood and organs. You are the ocean and the soil. You are the ancient trees and the softest blade of grass.
CELEBRITIES・2 DAYS AGO
People

Nicolas Cage and Riko Shibata made a stylish pair in New York City. The couple was spotted taking a shopping trip together in Manhattan's Sogo area on Sunday, where they coordinated in black coats and jeans. Cage, 57, and Shibata, 27, were seen enjoying themselves as they shared a laugh...
NEW YORK CITY, NY・2 DAYS AGO
Hello Magazine

Maggie Gyllenhaal had a lot to smile about on Monday and her daughter, Ramona, was right there beside her to cheer her along. The actress' film, The Lost Daughter, was a big winner at the Gotham International Film Awards but Maggie's teenage offspring's appearance was as much of a hit.
CELEBRITIES・1 DAY AGO
TVShowsAce

Jill Duggar is back and better than ever! The former Counting On star debuted her brand new look on Tuesday evening. What has Jill done this time?. As we recently reported, Jill debuted a slightly new look after a regular trip to the hair salon. At the time, she just got a trim and style, leaving her hair looking healthier and shinier. At the time, she promised a big change soon. She wrote, “Y’all have been asking if I’m gonna change things up big like I talked about doing earlier this summer…Yes! Still planning on it and hoping to soon!”
CELEBRITIES・20 HOURS AGO
HelloBeautiful

Tiffany served body on a Thanksgiving platter in this Stevie the Designer dress.
THEATER & DANCE・1 DAY AGO
TVGuide.com

Red light: You've finished Netflix's Squid Game, about a group of people pulled together to play life-or-death playground games for money and you don't know what to watch next. Green light: We've got a list of several shows like Squid Game that fans should watch next!. While we wait for...
TV SERIES・9 DAYS AGO