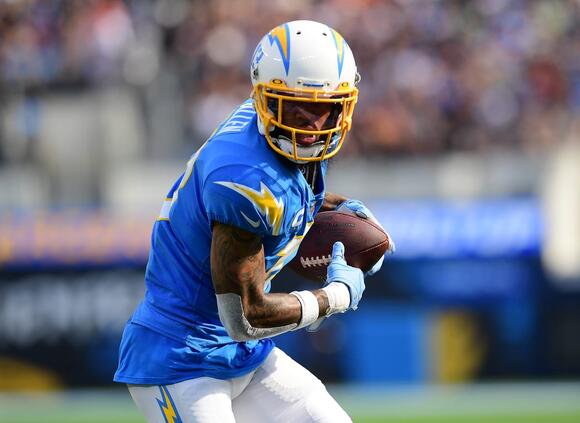 Discover player props odds, plays, and insights for Keenan Allen in his Week 6 contest with the Los Angeles Chargers against the Baltimore Ravens.

Before Keenan Allen hits the field for Sunday's game, which starts at 1:00 PM ET on CBS, here are some key facts and figures you should know ahead of placing a bet on his player prop bet markets. This Week 6 matchup sees Allen's Los Angeles Chargers (4-1) square off against the Baltimore Ravens (4-1) at M&T Bank Stadium in Baltimore, Maryland.

There was a time when the Ravens would have celebrated holding Le’Veon Bell to 48 yards on 11 carries. Not so long ago, he lived in their nightmares — those outside runs on which he’d wait and wait, then snap off a double-digit gain, or the pass routes on which he’d toy with some poor linebacker. As an All-Pro for the Pittsburgh Steelers, he played a starring role in some of the most painful ...
NFL・26 DAYS AGO
FanSided

The Baltimore Ravens were without quarterback Lamar Jackson in practice on both Wednesday and Thursday as the former MVP sat out due to a non-COVID-19 illness. This marked the third time this season that Jackson had missed practice time due to an illness. Although it certainly didn’t hurt his team the previous two times as the Ravens went on to win both games.
NFL・16 DAYS AGO
The Spun

The Baltimore Ravens lost to the Pittsburgh Steelers on Sunday afternoon and have reportedly suffered a crushing injury loss, too. According to NFL Network insider Ian Rapoport, the Ravens have lost standout defensive back Marlon Humphrey for the season. “Marlon Humphrey is suspected to be out for the season with...
NFL・20 HOURS AGO
sportsgamblingpodcast.com

Oddsmakers project a tight contest when the Los Angeles Chargers (6-4) visit the Denver Broncos (5-5) on Sunday, November 28, 2021 in a matchup between AFC West opponents at Empower Field at Mile High. Los Angeles is favored by 2.5 points. The point total is 47.5 for the game. Chargers...
NFL・11 DAYS AGO

TV: CBS (KCTV – Kansas City, MO) Live stream the Baltimore Ravens at Pittsburgh Steelers game on fuboTV: Start with a 7-day free trial!. The Steelers haven't won their last three games, as they tied the Lions and then lost to the Chargers and Bengals. It has dropped their record to 5-5-1 and has them scrambling to stay in the playoff picture.
NFL・1 DAY AGO
Sportsnaut

MMQB: T.J. Watt Explains How the Steelers Did Just Enough to Beat the Ravens

Pittsburgh remains alive in the playoff race, because its defensive leader kept himself ready virtually. Plus, Russell Wilson, Jared Goff and much more from Week 13.
NFL・11 HOURS AGO
Sports Illustrated

Super Bowl 2022: The Tampa Bay Buccaneers are the reigning NFL champions, but who'll make the playoffs — and lift the Lombardi Trophy at the end of this season?
NFL・3 DAYS AGO
Sportsnaut

Check-in here throughout the year for the NFL games today full weekly schedule. Including links to Sportsnaut’s season forecasts for
NFL・18 HOURS AGO
Sportsnaut

Denver Broncos schedule: Needing a bounce back against hapless Lions

Betting the heavy favorites paid dividends for bettors Sunday, although Vikings and Ravens moneyline bettors felt the burn on the final plays.
NFL・3 HOURS AGO

Ravens All-Pro cornerback Marlon Humphrey will miss the remainder of the season with a torn pectoral muscle.
NFL・1 HOUR AGO
Sportsnaut

Baltimore Ravens schedule: Rebounding against the Browns in Cleveland

Los Angeles Rams schedule: Staying alive in the NFC West against the Cardinals

Las Vegas Raiders schedule: Must win for Derek Carr and Co. against the Chiefs

Kansas City Chiefs schedule: Getting offense going against the Raiders

The first 17-game season in NFL history is well underway. And while there are still plenty of games ahead to
NFL・5 HOURS AGO
featureweekly.com

The Dallas Cowboys will be missing wide receiver Amari Cooper for at least two of their three games in a 12-day span, beginning Sunday against the Kansas City Chiefs. Cooper was placed on the reserve/COVID-19 list on Friday. Cooper tested positive for COVID-19 and is unvaccinated, according to ESPN, which...
NFL・16 DAYS AGO
The Spun

Legendary NFL running back Adrian Peterson reportedly could have retired and rode off into the sunset – and onto a notable TV show – at the start of the 2021 season. NFL.com reports that Peterson, who recently signed with the Tennessee Titans, had an offer to appear on a notable TV show.
NFL・29 DAYS AGO