NORMAN — The Caleb Williams era officially began on Saturday night against TCU — and it started with a bang.

Williams connected on his first 10 passes, was 13-of-15 for 261 yards and two TDs at halftime (with a dropped touchdown pass) and directed the Sooners to four scoring drives and 309 total yards — in the first half alone.

In a 52-31 Big 12 Conference victory over TCU at Memorial Stadium, the No. 4-ranked Sooners extended the nation’s longest winning streak to 15 games with an authoritative offense and a defense that — still missing four starters with injury — continued to struggle. 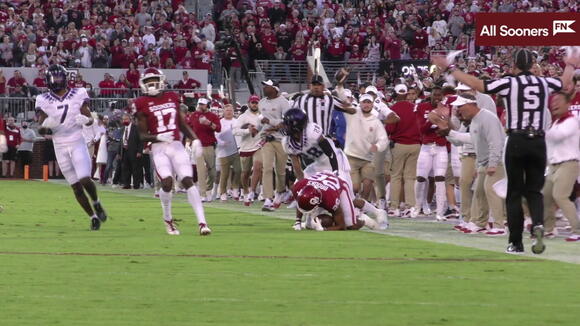 Still, as long as Williams and the OU offense play at this level, those injured defenders have the luxury of an explosive offense holding things down while they take their time time to get well.

In his first game replacing Spencer Rattler as the starter, Williams finished 18-of-23 through the air for 295 yards with four touchdown passes and a mind-bending 41-yard touchdown run.

Kennedy Brooks kept the TCU defense off balance by rushing for 153 yards (7.7 per carry) and a touchdown, and Eric Gray ran for his first TD as a Sooner.

Williams threw three touchdowns passes to Jadon Haselwood, another to Jeremiah Hall, and looked poised and confident as he kept the TCU defense guessing.

Williams opened with a masterful seven-play, 75-yard drive that put the Sooners up 7-0 on Kennedy Brooks’ 2-yard TD run, went 62 yards in seven plays for a 14-0 lead after his perfect 17-yard throw on a slant to Hall, directed a six-play, 59-yard drive for a Gabe Brkic field goal that put OU up 17-7, and, right before halftime, engineered a near flawless, five-play, 76-yard possession that took just 83 seconds and put the Sooners ahead 24-14 just 20 seconds before the break. 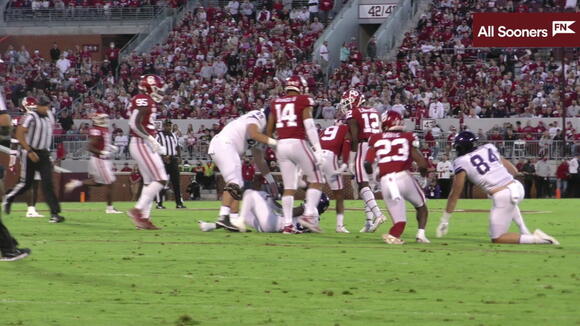 He also directed a first-half drive that ended with Brkic’s 46-yard miss.

Rattler, meanwhile, participated in warm-ups and went out for the pregame coin toss in full uniform, but didn’t play.

It was largely a foregone conclusion after Williams’ performance last week in the Cotton Bowl, a dramatic 55-48 victory over Texas in the Red River Rivalry. Williams entered the game last week with his team trailing 28-7, and contributed 299 yards total offense, three touchdowns and one of the most dramatic finishes in the 117-year history of the series.

It was the second straight OU-Texas game in which Rattler committed two first-half turnovers and was benched. Last year, he was pulled for Tanner Mordecai but returned and led the Sooners to a thrilling four-overtime victory. This year, Rattler returned to throw a 2-point conversion to Drake Stoops, but otherwise yielded to Williams the rest of the way.

While Rattler used last year’s setback in Dallas as a springboard to a strong finish to the 2020 season, this year it simply opened the door for the No. 1 overall recruit in the 2021 class.

Where Rattler had gotten safe and conservative with his throws as the OU offensive line struggled to find consistency, the athletic Williams hung in the pocket when he needed to, scrambled around when he had to, and threw it deep against the Horned Frogs — a lot.

In addition to Brkic’s miss off the right upright, the Sooner defense actually left plenty of points on the table as well.

Late in the third quarter, OU cornerback Latrell McCutchin stripped a fumble from TCU’s Derius Davis, and Sooners linebacker DaShaun White scooped it up and ran it back — but fumbled the ball out of the end zone as he stretched for the pylon, giving the football back to the Horned Frogs.

Then early in the fourth quarter, Duggan lobbed a pass into the end zone for Quentin Johnston, and OU corner Joshua Eaton had what looked like an easy interception on Duggan’s under thrown ball. Instead, Johnston reached around and yanked the football out of Eaton’s hands for the touchdown to make it 45-31.

Spencer Rattler has entered the transfer portal. The former Oklahoma starting quarterback was replaced by Caleb Williams against Texas this year, leading many to speculate that his time at OU would be done at the conclusion of this season, and now it’s official. “Sooner Nation, thank you for allowing me...
OKLAHOMA STATE・15 HOURS AGO
AllSooners

Oklahoma’s defensive line recruiting took a major hit on Monday morning. Derrick Moore, a talented 4-star defensive lineman in the class of 2022, announced his decomittment from the program in the wake of Lincoln Riley’s move to USC. “I would like to say thank you to the University of Oklahoma...
OKLAHOMA STATE・17 HOURS AGO
AllSooners

Joe Castiglione May Have to Break Precedent With Oklahoma Hire

Joe Castiglione has a massive decision on his hands. Lincoln Riley left the Sooners high and dry, and with a move to the SEC looming, Oklahoma is in need of a new head coach. Castiglione obviously made the right call in 1999 during his first search as an athletic director when he hired then Florida defensive coordinator Bob Stoops, and again he struck gold when he elevated Riley from offensive coordinator to head coach in 2017.
OKLAHOMA STATE・9 HOURS AGO
AllSooners

Monday, Nov. 29: 6:53 p.m. Another 2022 recruit reaffirms his commitment with Oklahoma. Offensive tackle Jacob Sexton appears to be trying to rally the troops with signing day just around the corner on Dec. 15. Monday, Nov. 29: 8:33 a.m. Another blow to the 2022 class drops this Monday morning.
OKLAHOMA STATE・13 HOURS AGO

The Oklahoma Sooners will be down another wide receiver. Former 5-star Jadon Haselwood announced he will be entering the transfer portal in a statement on Instagram. "It was a childhood dream of mine to be a Sooner and I'm blessed to have been able to live that out," Haselwood said. "After careful consideration, and due to many factors, I've decided that I'll be entering the transfer portal.
OKLAHOMA STATE・8 HOURS AGO
AllSooners

STILLWATER — A host of streaks came to an end Saturday night in Boone Pickens Stadium. With No. 7 Oklahoma State’s 37-33 Bedlam victory over the No. 10 Oklahoma Sooners, OU will not extend their Big 12 Championship streak to seven straight. The Cowboys also snapped a six-game losing skid...
OKLAHOMA STATE・1 DAY AGO
AllSooners

Oklahoma AD Expounds on Why Lincoln Riley Left for USC

NORMAN — So why did Lincoln Riley really leave Oklahoma?. The world may never know. Riley was introduced as USC’s new head coach on Monday in Los Angeles, half a continent and about 28 hours away from where the earth shook on Sunday. Riley, a precocious 38 years old and...
OKLAHOMA STATE・8 HOURS AGO

Oklahoma Players: 'It's Been a Hell of a Day'

Finally, on Sunday night, Oklahoma players got to speak out. After OU coach Lincoln Riley walked away from the Sooners and took the head coaching job at USC, two players in particular — H-backs Jeremiah Hall and Brayden Willis — expressed themselves on their weekly podcast. On the latest episode...
OKLAHOMA STATE・1 DAY AGO
AllSooners

More roster changes for the Oklahoma Sooners. Just moments after quarterback Spencer Rattler announced he would be entering the transfer portal, wide receiver Theo Wease is reportedly doing the same according to 247Sports’ Mike Roach. Originally a 5-star prospect in the class of 2019, Wease showed flashes across his first...
OKLAHOMA STATE・14 HOURS AGO
AllSooners

The biggest domino has fallen. With Lincoln Riley’s stunning decision to leave Oklahoma for USC, the expectation came that the Sooners would suffer a serious hit on the recruiting trail. While it has been expected, it may have come even quicker and more furiously than most thought. 2023 5-star wide...
OKLAHOMA STATE・1 DAY AGO
AllSooners

Lincoln Riley shocked the college football world on Sunday with a stunning decision to leave Oklahoma and take over the program at USC. After weeks of speculation that Riley could potentially leave Norman for LSU, he starkly denied he would be headed to Baton Rouge just moments after the Sooners fell to Oklahoma State on Saturday night in Stillwater.
OKLAHOMA STATE・1 DAY AGO

Lincoln Riley’s decision to leave Oklahoma to become the head coach of the USC Trojans has come as a blindside blow to many in the college football world. Unfortunately for many Sooners players, it was also a shocking reveal to them as well. As the news has continued to percolate...
COLLEGE SPORTS・1 DAY AGO
AllSooners

The Oklahoma Sooners lost another commitment. In the wake of Lincoln Riley bolting to USC, 4-star running back Treyaun Webb from the class of 2023. “It’s been a wild recruiting process for me to say the least,” Webb said in a statement on Twitter. “But at the end of the day, I have to do what’s best for me.
OKLAHOMA STATE・1 DAY AGO
AllSooners

Linebacker Kobie McKinzie, the first player to offer a verbal commitment to Oklahoma in the 2022 class, has decomitted from the Sooners. McKinzie, from Cooper High School in Lubbock, announced his decision Sunday night on Twitter. He’s the latest OU pledge to decommit after Sunday’s news that Oklahoma head coach...
OKLAHOMA STATE・1 DAY AGO

In a stunning twist, Oklahoma head coach Lincoln Riley is reportedly going to accept the head coaching job at USC. Riley’s stay in Norman lasted five years, where he finished 55-10 as the head coach and won six Big 12 Championships, stretching back to when he was named the offensive coordinator in 2015.
OKLAHOMA STATE・1 DAY AGO
AllSooners

As USC welcomed Lincoln Riley to Los Angeles on Sunday night, Riley expressed gratitude to Oklahoma and sounded eager to embrace the challenge of a significant rebuild at Troy. However, Riley says “the pieces are in place” for a quick return to glory at Southern Cal. “I am truly excited...
NFL・20 HOURS AGO
AllSooners

Lincoln Riley is no longer the head coach of the Oklahoma Sooners. After speculation of a move to LSU ran rampant over the last month, it was the USC Trojans that truthfully had Riley’s eye as he makes the shocking move to leave Norman and take over the premier program in the Pac-12.
OKLAHOMA STATE・1 DAY AGO
AllSooners

Oklahoma GameDay: Under the Radar

Coming off a Senior Day victory over Iowa State, the SI Sooners staff takes a look at OU players who could be pivotal in Oklahoma beating OSU and landing a berth in the Big 12 Championship Game. John Hoover: Austin Stogner. This feels like a reach, because Stogner hasn’t been...
OKLAHOMA STATE・2 DAYS AGO