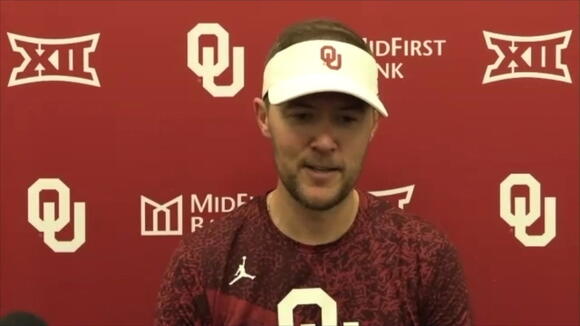 Lincoln Riley takes questions about Caleb Williams, Spencer Rattler, the Oklahoma defense and how his team performed in Saturday's 52-31 win over TCU.

Report: LSU Has Made Lincoln Riley A Huge Offer

On Wednesday afternoon, news broke that Michigan State offered to make Mel Tucker one of the highest-paid coaches in college football. According to a report from the Detroit Free Press, Michigan State offered a 10-year, $95 million deal. With Tucker seemingly locked up as the Spartans head coach, LSU appears to have whiffed on at least one coach.
MICHIGAN STATE・9 DAYS AGO
The Spun

Lincoln Riley Has Responded To The LSU Job Rumors

In the world of ever-evolving college football coaching rumors, the latest suggests LSU might make a run after Lincoln Riley. The Tigers have plenty to offer. And while Oklahoma’s one of the best jobs in college football, LSU is even better. Reporters pressed Riley on the matter during media availability...
COLLEGE SPORTS・10 DAYS AGO
The Spun

With his overwhelming success as the head coach of the Oklahoma Sooners, Lincoln Riley has earned a reputation as one of the brightest young coaches in the college football world. So bright in fact that he’s been widely regarded as a potential future NFL head coach. Each year, NFL Network...
NFL・9 DAYS AGO
On3.com

Paul Finebaum had strong words on Sportscenter for Lincoln Riley following Oklahoma’s loss to Baylor. Things got testy as the clock ran to zero in the contest, and Finebaum eviscerated the Sooners coach for his actions. “Well, first of all, I mean, Dave Aranda had every right to do this...
OKLAHOMA STATE・13 DAYS AGO

NORMAN — Oklahoma coach Lincoln Riley said his team hadn't been papering over their mistakes during all those uninspiring victories, but he was surprised they didn't respond well to adversity last week. After a 9-0 start, the Sooners took a 27-14 loss in Waco. After delivering key plays in crunch...
OKLAHOMA STATE・10 DAYS AGO
247Sports

The last few seconds of Baylor’s 27-14 win against Oklahoma on Saturday were among the most eventful closing moments in college football this season. First, Bears students stormed the field with one second left on the clock, causing an extensive pause in the game. Then, after officials cleared the field, Baylor coach Dave Aranda kicked a field goal to expand his decisive lead to 13 points.
OKLAHOMA STATE・13 DAYS AGO
Sportsnaut

10 highest-paid college football coaches (and are they worth it?)

Want to know just how much money the highest-paid college football coaches make? Click here to find out Nick Saban's salary and the top 10 highest-paid coaches.
NFL・1 DAY AGO
FanSided

LSU football is looking for a new head coach and a wild message board ‘report’ has Lincoln Riley leaving Oklahoma to take over from Ed Orgeron. With one game left in the regular season against rival Texas A&M, LSU football is preparing to close the book on Ed Orgeron as their head coach and, as such, the coaching carousel is whirling around in Baton Rouge.
OKLAHOMA STATE・4 DAYS AGO

Though Dave Aranda and the Baylor Bears (8-2, 5-2 Big 12) had Saturday’s win over Oklahoma (9-1, 6-1 Big 12) well in hand with the final seconds of the fourth quarter dwindling away, an already strange game still somehow managed to get stranger. The Bears appeared to be content with...
OKLAHOMA STATE・13 DAYS AGO
TideSports.com

Lincoln Riley and Jimbo Fisher rebuff LSU coaching rumors, but only one sounds sure | Toppmeyer

This the "Topp Rope," a biweekly SEC football column from the USA TODAY Network's Blake Toppmeyer. College football coaches rank alongside politicians, lawyers and car salesmen when it comes to truthfulness. Sportswriters joke that when a coach says he’s not leaving for another job, it means he’s definitely leaving for...
NFL・9 DAYS AGO
ESPN

Baylor fans were so excited that their No. 13 Bears beat No. 8 Oklahoma that they stormed the field twice on Saturday. Assuming the game was over, throngs of fans who had been perched on walls waiting for the final seconds to tick off the clock rushed the field, not realizing Baylor coach Dave Aranda had called a timeout with three seconds left, up 24-14.
OKLAHOMA STATE・13 DAYS AGO
thespun.com

For the past week and a half, Oklahoma football coach Lincoln Riley has been linked to LSU. On Tuesday, he finally responded to those rumors. To absolutely no one’s surprise, Riley tried to shoot down the idea of him leaving Oklahoma for LSU this offseason. “I coach at the University...
COLLEGE SPORTS・10 DAYS AGO

Lincoln Riley on LSU Coaching Rumors: 'I Coach at the University of Oklahoma'

"I coach at the University of Oklahoma... you guys know where I stand."
NORMAN, OK・10 DAYS AGO
On3.com

Lincoln Riley has been one of the key names in the college football coaching carousel recently with several reports indicating the Oklahoma Sooners coach as a top target for the open job at LSU. Earlier this week, FOX college football analyst Joel Klatt joined The Colin Cowherd Show and was...
COLLEGE SPORTS・8 DAYS AGO
FanSided

LSU Football: The Lincoln Riley dream is still alive for the Tigers

LSU Football athletic director Scott Woodward is doing a great job of keeping the details of the Tigers’ ongoing coaching search as quiet as possible. No one really seems to know what’s going on with the search…which is why all options are seemingly still on the board for LSU. Specifically,...
COLLEGE SPORTS・1 DAY AGO
The Spun

For the past few weeks, Oklahoma head coach Lincoln Riley has been linked to the LSU job opening. Though he’s given no indication that he’s heading to Baton Rouge, LSU fans are all in on this hypothetical scenario. When asked about the LSU rumors last week, Riley shot down the...
COLLEGE SPORTS・20 HOURS AGO

Oklahoma football coach Lincoln Riley had a postgame message the College Football Playoff committee might want to hear. Following a 28-21 victory against Iowa State on Saturday, the Sooners head man was asked how his team has managed to win so many close games. In that question, local columnist Berry...
COLLEGE SPORTS・6 DAYS AGO
heartlandcollegesports.com

The Oklahoma Sooners saw their 17-game winning streak come to an end on Saturday in Waco against the Baylor Bears. And when losing is something a team is not accustomed to, sometimes one may react in a way that is petty, tone deaf and hypocritical, just to use a few descriptions.
COLLEGE SPORTS・12 DAYS AGO
247Sports

Lincoln Riley wasn't happy with the way his team played in Oklahoma's 27-14 loss to Baylor. And he was even unhappier with how the game ended. Baylor's student section prematurely rushed the field, and Riley believed that Baylor should have been called for a 15-yard penalty for the disturbance. After the officials cleared the field, Baylor coach Dave Aranda kicked a field goal to expand his decisive lead to 13 points.
OKLAHOMA STATE・13 DAYS AGO