Drew O’Connor and Brock McGinn each had a goal and an assist Saturday as the Pittsburgh Penguins built a four-goal lead in the first period and won their home opener 5-2 over the Chicago Blackhawks.

Patrick Kane had a goal and an assist, and Kirby Dach also scored for Chicago.

The Blackhawks’ Marc-Andre Fleury, formerly a Penguins franchise goalie, gave up four goals on 10 shots before being pulled for Kevin Lankinen, who made 15 saves.

The Penguins took a 1-0 lead 15 seconds into regulation. Blueger blew past Jonathan Toews at the right point. His attempted pass from the lower part of the right circle went off the skate of sliding defenseman Seth Jones and past Fleury.

Related: If you’re a fan of the Penguins, check out #LetsGoPens rumors, rankings, and news here .

Fleury was forced into misplaying the puck behind his net by Pittsburgh’s Dominik Simon, and O’Connor backhanded the puck into an open net at 5:33 of the first for his first NHL goal and a 2-0 lead.

McGinn made it 3-0 at 10:59 of the first when he converted a feed from O’Connor off a two-on-one, beating Fleury short side from the right dot.

At 11:25 of the first, Heinen upped it to 4-0 on a lofted shot through traffic from the slot, his team-leading third goal and first career three-game goal streak. 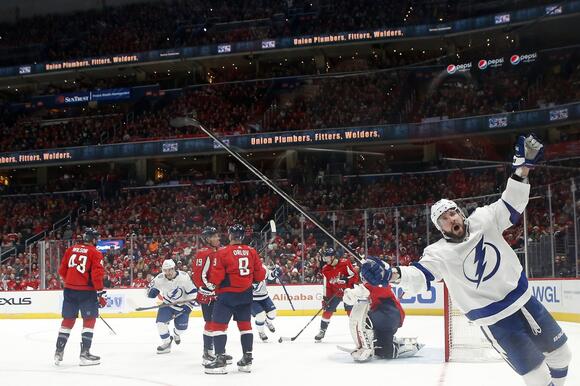 That chased Fleury, who was animated and smashed his stick as he retreated down the Blackhawks runway.

Kane cut the lead to 4-1 with a power-play goal at 5:00 of the second. From the right dot, he one-timed a feed from Jones. It was the first goal Pittsburgh’s penalty killers allowed this season.

With Jarry pulled for an extra attacker on a delayed penalty, Zucker pushed the Penguins’ lead to 5-1 at 17:55 of the second. His sharp-angle backhander went in off the skate of defenseman Connor Murphy.

This latest edition of the NHL Stat Corner covers the past two days (Friday/Saturday) since the NHL took a one-day break for American Thanksgiving. Scoring highlights this entry with lots more player and team stats and milestones from around the NHL. Ovechkin Goals Fuel the Capitals. Alex Ovechkin is tied...
NHL・8 DAYS AGO
Sportsnaut

WATCH: Pittsburgh Penguins prove too much for Winnipeg Jets

Danton Heinen scored the tie-breaking goal early in the third period and Tristan Jarry made 30 saves, as the Pittsburgh
NHL・14 DAYS AGO
FanSided

So far this season, we have been crying the blues and shedding tears, regarding the slow start of our beloved Black and Gold. Let me tell you that the Pittsburgh Penguins are on a roll. Winners of their last 3 games and outscoring their Canadian opponents 11-1 in the process. Take a look at the standings.
NHL・12 DAYS AGO

Chicago Blackhawks: Calgary was a tough way to end the trip

Since firing Jeremy Colliton, the Chicago Blackhawks have been pretty good. They knew that the western road trip was going to be a tough one over the last week was going to be tough. After this loss to the Calgary Flames, they have finished the trip 2-2-0 which isn’t great but it isn’t terrible at all. They are now 6-11-2 going into American Thanksgiving.
NHL・12 DAYS AGO
Sportsnaut

Alex DeBrincat scored with 3:33 remaining in overtime as the Chicago Blackhawks rallied to defeat the visiting St. Louis Blues
NHL・10 DAYS AGO
FanSided

Chicago Blackhawks: DeBrincat and Kane are magical in OT

The statistics say that you have a significantly better chance of making it to the postseason if you are in a playoff spot by American Thanksgiving. At 6-11-2, the Chicago Blackhawks were nowhere near a playoff spot. In fact, they were closer to the basement of the Western Conference than the playoff line.
NHL・10 DAYS AGO

No, the title is not a joke. On Monday, the Fenway Sports Group inked a deal to purchase a controlling stake in the Pittsburgh Penguins hockey team. This came as a bit of a shock as there were rumblings early on, and then there was serious talk of the team being bought. Now, the Penguins are a part of a massive family of sports teams that extend to more than just hockey.
NHL・7 DAYS AGO
FanSided

Chicago Blackhawks blanked at the hands of the San Jose Sharks

Before the game on Sunday night, the Chicago Blackhawks celebrated Hockey Fights Cancer night at the United Center. They had special hockey sweaters to wear during the pregame warmups sporting the purple that is used to spread cancer awareness and they looked glorious. It is special to honor those fighting this terrible disease.
NHL・8 DAYS AGO
Quad Cities Onlines

Another daunting road trip awaits the Chicago Blackhawks — starting off with the Eastern Conference-leading Washington Capitals — but among the many things they’ll try to tweak, they’ll stand pat on one thing: scoring. The Hawks are last in the league in five-on-five goals (26) through 21 games as of...
NHL・6 DAYS AGO
cbslocal.com

PITTSBURGH (KDKA) – The Penguins are back in black. For 12 home games this season, starting on December 11, the Penguins are bringing back their diagonal, black Pittsburgh Jerseys. The jersey, a throwback to the 1990s, features yellow, diagonal Pittsburgh text on the crest and the skating penguin on the...
NHL・5 DAYS AGO

The Chicago Blackhawks were one of the worst teams in the National Hockey League during the month of October. It was tough to watch them because anything that could go wrong, did go wrong. Their 0-7-2 start is how they finished October. Not getting a single win during the month made it pretty clear that this season could be a long one.
NHL・5 DAYS AGO
FanSided

Penguins Jarry is Rising to the Top

The Pittsburgh Penguins goaltender Tristan Jarry #35, is rising to the top of the NHL. He is considered to be one of the best goalies in the game, at this moment in time. Jarry is playing at such a high level that he single handedly, took the Pittsburgh Penguins team, placed them on his back, and led them to some much-needed wins in November. Those wins, allowed the Penguins to get back into the Playoff race.
NHL・4 DAYS AGO
Pgh Hockey Now

The Pittsburgh Penguins have lost three in a row (0-2-1) and, based on winning percentage, are out of the playoff seedings. Friday at practice, head coach Mike Sullivan may have sent a little message by shuffling the lines, not once but twice. Bryan Rust and former Penguins winger Patric Hornqvist made Frank Seravalli’s top-10 NHL trade bait list. The soap opera appears to be settling in Montreal as both the Bostonian owner and Executive Vice President addressed the Montreal media.
NHL・3 DAYS AGO
Pro Hockey Rumors

What your team is thankful for: Chicago Blackhawks

As the holiday season approaches, PHR will take a look at what teams are thankful for as the season heads toward the one-quarter mark. There also might be a few things your team would like down the road. We’ll examine what’s gone well in the early going and what could improve as the season rolls on for the Chicago Blackhawks.
NHL・3 DAYS AGO
The Southern

Chicago Blackhawks coach Derek King remembers the first time he met Brandon Hagel — he just wanted to be sure he didn’t take the heat if Hagel turned out to be a bust. “When we first got him in Rockford (in 2018), young, baby-faced kid, he’s skinny and you’re wondering, ‘OK, am I going to blame the scouts on this one in about a month?’”
NHL・1 DAY AGO
Chicago Tribune

Some will say that Minnesota Wild forward Ryan Hartman got away with a slap-on-the-wrist punishment for a crime worthy of a suspension committed during Sunday's 5-4 shootout loss to the Tampa Bay Lightning. In the first period of the contest, Hartman was assessed a minor penalty for tripping when he...
NHL・14 DAYS AGO