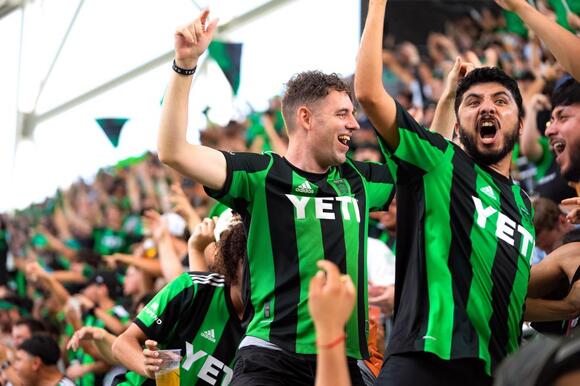 After their first two-win week and a two-week hiatus, Austin FC is back at home against Minnesota United as they attempt to up their home win streak to three on Saturday.

The team kicks off at 8 p.m. against the Loons in their first matchup since a 2-0 loss in June, but they're 1-1 against the club after beating Minnesota in May for their first-ever shutout.

Austin maintains a last-place spot in the West but has seen a bit of a late comeback with two wins in their last three matches. Austin's Cecilia Dominguez, who scored a brace for the team in their last match against Real Salt Lake, will look to keep that momentum as the team works for another victory. Meanwhile, the seventh-place Loons will work to keep that last spot in playoff contention as the season nears its end.

Follow along here for updates on the biggest plays of the match.

This may be Austin FC's most popular lineup— even the crankiest fans are commending the strong starting XI on Twitter. Tonight's starters are the same as in their win against Salt Lake.

With Matt Besler still out on concussion protocol, Zan Kolmanic, Jhohan Romana and Julio Cascante take the back along with Hector Jimenez, who is in for right back Nick Lima. As (almost) always, Brad Stuver holds it down in goal.

When Diego Fagundez signed onto the new Austin FC program, the 26-year-old midfielder was eager for a fresh start, and it paid off—on Wednesday, Fagundez was given the team's first Offensive Player of the Year award.Already a decade into his MLS career, Fagundez became a surprise standout in Austin, tying for the most goals on the team and becoming a fan favorite after scoring the club's first goal back in April. Fagundez has made headlines before—at 15, he joined the New England Revolution before he could even drive to practice and later became the youngest player to reach 200 appearances...
MLS・20 DAYS AGO
Austonia

Already tired of the Austin FC offseason?The now 1-year-old club has released its first 2022 opponent just weeks after its final match of 2021, announcing that it will play FC Cincinnati for its home opener at 5 p.m. on Saturday, Feb. 26.The upcoming game could be a match made in heaven for the fledgling Austin FC—although the Verde and Black were 12th of 13 teams in the West in 2021, FC Cincinnati fared worse, earning just four wins to come in last in the Eastern Conference.The Cincinnati matchup could be a chance for Austin to flex its new muscles early...
MLS・16 DAYS AGO
austinfc.com

Austin FC announced on Tuesday the Club’s decisions on the 2022 contract options of several players, putting the current Austin FC roster for next season at 22 contracted players. The following players had their contract options exercised for 2022: Freddy Kleemann, Will Pulisic and Alex Ring. Following the retirement of...
MLS・8 DAYS AGO
Austonia

Austin FC may not have 15 wins on the pitch, but the club's mascots won over thousands of fans as 15 rescue pups were adopted during the team's first season as part of the Austin Pets Alive! Honorary Mascot program.Featured at each home game at Q2 Stadium, these Verde-clad rescue dogs welcomed supporters with winning smiles as they searched for their forever homes. The program found 15 great matches and even had Austin FC goalkeeper Will Pulisic foster 4-year-old Black Rose for a few months this summer.Pulisic and his girlfriend, Mia de Leon, took care of Black Rose after she...
AUSTIN, TX・18 DAYS AGO

Roster changes: Who's out and who's in for Austin FC's 2022 season

Looks like Austin FC is cleaning house—and they're taking a few Verde faves out ahead of the 2022 season.Following the retirement of defender Matt Besler, the club's original 33-man roster was trimmed to 22 in roster changes announced Tuesday.Who's out (From top left) Players Emmanuel Perez, Jared Stroud, Ben Sweat, Aaron Schoenfield, Brady Scott, Aedan Stanley, Kekuta Manneh and Sebastian Berhalter will not be with Austin FC for the 2022 season. (mlssoccer.com)Austin FC declined its contract options for six players, including:Kekuta MannehAaron SchoenfeldBrady ScottAedan StanleyJared StroudBen SweatStroud became an early fan favorite for the team after helping teammate Diego Fagundez to...
MLS・8 DAYS AGO
hillcountrynews

The 2022 Austin FC season is less than 100 days away, and the roster got its first real shakeup of the offseason on Tuesday. In an effort to improve our website and enhance our local coverage, HillCountryNews.com has switched to a membership model. Fill out the form below to create a free account. Once you're logged in, you can continue using the site as normal. You should remain logged in on your computer or device as long as you don’t clear your browser history/cookies.
AUSTIN, TX・6 DAYS AGO
Austin Chronicle

Austin FC is doing some downsizing. Faced with big decisions concerning over one-third of the club's inaugural season roster, the club announced Tuesday that just three players out of a possible nine had their contractual option years for 2022 exercised. Among the three returners is midfielder and captain Alex Ring,...
MLS・6 DAYS AGO
Austonia

From Longhorns to the USMNT: 5 sports NFTs kicking off in Austin's growing crypto-verse

When Texas and the NCAA passed a bill allowing college athletes to profit off their names and likenesses this summer, Longhorn athletes joined professional teams and athletes by stepping into the growing NFT scene.NFTs, which are essentially unhackable codes used as one-of-a-kind "certificates of authenticity" paid for with cryptocurrency Ethereum, have been cropping up in the Austin art scene and worldwide—and they're quickly evolving into a sports fans' paradise as a new way to snag some bragging rights through digital trading cards, tickets and highlight reels.Here are five Austin-based athletes and sports venues now involved in NFTs:NiftyHorns—emerging Texas NFT producer🚨🤘🏽Player...
AUSTIN, TX・12 DAYS AGO

Ingwe will be aiming at ending their four-match losing streak away to the Oilers on Saturday. 13-time Football Kenya Federation Premier League champions AFC Leopards will be kick-starting the top-tier this weekend with an away match to Bidco United. The Kenyan top-flight football had been suspended for three weeks by...
PREMIER LEAGUE・6 DAYS AGO
tribeza.com

For fans of Austin FC, goalie Brad Stuver is something of a darling. “We are a tight-knit group of people who look out for one another,” he wrote recently, in an open letter to supporters. “We stand by each other regardless of the circumstances and we rally behind each other in the good times and the bad.”
MLS・1 DAY AGO
KVUE

AUSTIN, Texas — Austin FC's Q2 Stadium will play host to the Mexican Men's National Team and two-time Copa America champions Chile on Dec. 8 for the sixth and final match of the 2021 MexTour match. The partnership is between the Federación Mexicana de Fútbol (FMF) and Soccer United Marketing...
MLS・1 DAY AGO
CBS Philly

CHESTER, Pa. (CBS) — A COVID crisis may have dashed the dreams of the Philadelphia Union fighting for an Eastern Conference Championship. Sunday’s game was the biggest in the franchise’s history. However, 11 key players were sidelined by the league’s health and safety protocols. “We’ll never know what we could have done tonight with a full group,” Head Coach Jim Curtin said after the loss. Philadelphia Union players, coaches and fans are only left to wonder after COVID health protocols sidelined 11 players, including their captain and goalie. Current health guidelines force players to quarantine if they have high-risk close contact, inclusive test...
MLS・2 DAYS AGO

FOXBORO (CBS) — After an incredible season on the pitch that saw him make play after play for the New England Revolution, midfielder Carles Gil has been named the 2021 Landon Donovan MLS Most Valuable Player. Gil will be presented with the MVP Tuesday afternoon at Gillette Stadium. Gil earned the league’s highest individual honor after dishing out a league-best 18 assists during the 2021 season, leading the Revolution to the club’s first Supporters’ Shield title and all-time MLS points record. “It is an honor for me to be named the MLS Most Valuable Player,” Gil said. “I want to thank everyone who...
MLS・1 DAY AGO