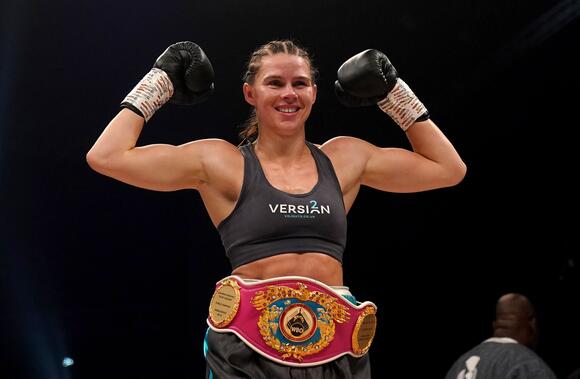 The Hartlepool fighter, who is unbeaten in her professional career, was making the first defence of the title she won almost exactly a year ago and it did not last long. It was a big step up in class for Muzeya and, although she came out with all guns blazing, she quickly ran out of steam and the referee stepped in just before the end of the second round.

Marshall, 30, is now set for a super-fight against American Claressa Shields and the pair will fight on the same card in December. 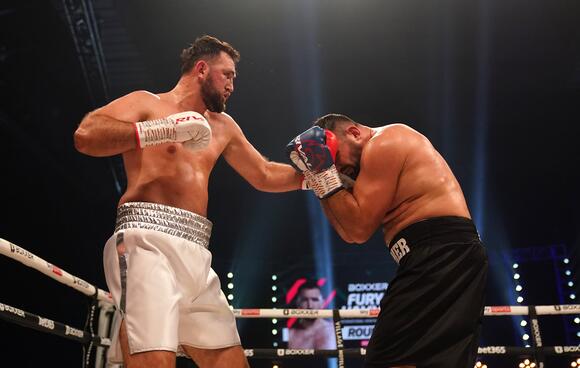 It was a good night for trainer Peter Fury whose son Hughie defeated Christian Hammer in a heavyweight contest that ended when the Romanian retired through injury after a bruising fifth round.

Hughie Fury who has set his sights on emulating cousin Tyson as a world champion, said: “I was very easy in there, I was going through the gears.

“We had a lot more gears to offer. The stoppage was coming no matter what. He was getting hit constantly.”

Catch him down the road. There are a lot of wrestlers under the WWE umbrella today, but some of them are going to get a bit less attention than others. Some of them are over in NXT UK, which is often about as far off of the radar as you can get in WWE, allowing it to put on a different kind of product. Now though, one of them will not be around NXT UK any longer.
WWE・16 HOURS AGO
firstsportz.com

Tyson Fury jokingly challenges WBO female middleweight boxer, Savannah Marshall, in a cross-gendered matchup. The fighter even offers to cut weight to make the fight happen. Heavyweight boxing legend Tyson Fury is having the time of his life coaching his younger brother Tommy Fury for his upcoming boxing bout against YouTuber Jake Paul. Tyson is coming off a win against Deontay Wilder, sealing off their trilogy with a banger of a fight. In a recent interview with iFL TV, talking about a possible matchup with Joe Joyce, Fury said he would rather fight the female middleweight champion.
COMBAT SPORTS・11 DAYS AGO
SPORTbible

Tommy Fury Is Reportedly OUT Of Jake Paul Fight

Tommy Fury is reportedly OUT of his blockbuster boxing match with Jake Paul on December 18. The pair have been embroiled in a bitter feud for months and were set to do battle in Miami a week on Saturday. However, YouTuber KEEMSTAR has claimed two separate sources have told him...
COMBAT SPORTS・10 HOURS AGO

Floyd Mayweather became well known for his ‘Money’ nickname and mantra over the years but tonight when all was said and done it was a bit different. Speaking after his boxer Gervonta Davis who he promotes beat Isaac Cruz — Mayweather passionately addressed the media. While also speaking to other...
COMBAT SPORTS・13 HOURS AGO
wrestlingrumors.net

Welcome back. There have been a lot of wrestlers released from WWE over the last year and a half. Those moves have changed the way the wrestling world works and that is not likely to be changing anytime soon. That makes for some rather interesting changes as other promotions are able to pick up some of the wrestlers here and there. That seems to be the case in triplicate this time around.
WWE・13 HOURS AGO
The Independent

Super League champions St Helens will open and close the regular season in 2022 with a French double.Kristian Woolf’s men will launch their bid for an unprecedented fourth successive Super League title at home to Catalans Dragons in a repeat of the 2021 Grand Final on Thursday, 10 February.Seven months later, on Saturday, September 3, Saints will welcome promoted Toulouse to the Totally Wicked Stadium for their 27th and final fixture before the play-offs.Super League has retained the top-six play-off system in use for the last two years and clubs will play four loop fixtures on top of their home...
RUGBY・11 DAYS AGO
The Independent

Tyson Fury joked he would rather fight Savannah Marshall in a "cross-gender" bout as he dismissed the idea of fighting Joe Joyce. Fury recently retained his WBC heavyweight title in his trilogy bout with Deontay Wilder, and is now helping his brother Tommy Fury prepare for Jake Paul next month. Fury is awaiting a next opponent, with Dillian Whyte unlikely to be available due his ongoing legal battle with boxing authorities. Fellow Briton Joyce has declared he is ready to fight Fury, but the champion is not interested.He told IFL TV: “I’m probably looking at someone like Savannah Marshall to...
COMBAT SPORTS・10 DAYS AGO

Dominique Wooding will make his maiden title defence of the Cage Warriors title, as he takes on the 9-3 Carlos Abreu on the second night of Cage Warriors’ upcoming Double Trouble event on Saturday 11th December. Several other fights have also been added across both nights of the double header.
UFC・7 DAYS AGO
fightsports.tv

While the boxing community wonders if Tyson Fury intends to take on Joe Joyce after he potentially beats Dillian Whyte, the WBC heavyweight champion seems to have a different plan. “I’m probably looking at someone like Savannah Marshall to fight in a cross-gender heavyweight championship match-up. That is more interesting...
COMBAT SPORTS・6 DAYS AGO
fourfourtwo.com

Blackburn made it two wins in three with an emphatic 4-0 victory over woeful Peterborough in the Sky Bet Championship. Tony Mowbray’s men were home and dry by half-time after a three-goal, first-half blitz put them out of sight of their beleaguered visitors. From the moment Harry Pickering headed Rovers...
SOCCER・11 DAYS AGO
newsdakota.com

FARGO, N.D. (NewsDakota.com) – The Valley City Hi-Liners wrestling team were on the road to take on the Fargo North Spartans, looking to make it 2-0 on the season. With five pinfalls and three forfeits, the Hi-Liners took down the Spartans 51-15. Valley City (VC) 51.0 Fargo North (FN) 15.0.
WWE・5 DAYS AGO

LONDON (Reuters) – England will begin their quest for a fourth consecutive Women’s Six Nations title away at Scotland on March 26 after organisers on Thursday announced the fixtures for next year’s competition. The 2022 edition, returning to its traditional format after COVID-19 enforced changes this year, will take place...
WORLD・4 DAYS AGO
Cyclingnews

Maghalie Rochette (Specialized-Feedback Sports) will not be among the Canadians heading to the Pan American Cyclo-cross Championships in Garland, Texas this weekend. The two-time elite champion would have been among the favourites if she were to attend, particularly after placing second in the UCI Cyclo-cross World Cup in Besançon, but with calendar clashes in Europe the rider made the tough decision to miss out on a chance to retain the jersey.
CYCLING・3 DAYS AGO
The Independent

Belgium’s Luca Brecel is looking to lock in the biggest win of his career in York on Sunday after revealing he was almost caught short in his quest to become the first player from continental Europe to land a ‘triple crown’ title.Brecel swept in four centuries plus two more breaks over 80 to sink Kyren Wilson 6-4 and reach the UK Championship final, starting with a clearance of 130 and rounding off his victory in ice-cool fashion with a show-boating 112.But the 26-year-old, a two-time former ranking event winner, said he had been reduced to panic earlier this week when...
SPORTS・2 DAYS AGO
San Diego Union-Tribune

Paul said he’s “giving [Woodley] $500,000 extra if he can knock me out.”
COMBAT SPORTS・4 HOURS AGO
The Independent

Shrewsbury and Plymouth have announced the death of their former player Marvin Morgan aged 38. Romelu Lukaku and Ashley Young were among the players to pay tribute to the Manchester-born striker. Chelsea forward Lukaku wrote on Instagram: “This is some s*** news man. RIP my brother you will be missed.”
BEAUTY & FASHION・7 HOURS AGO