Oklahoma GameDay: Under the Radar 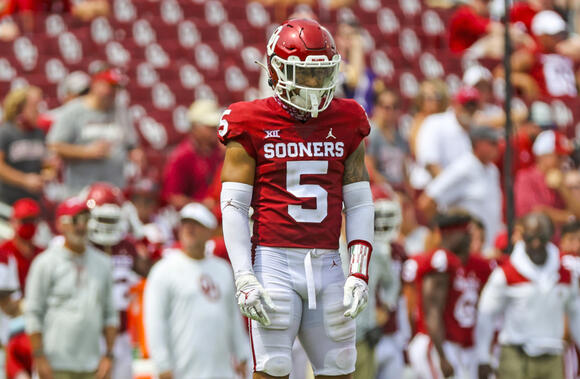 Coming off a wild Red River Showdown, the SI Sooners staff looks at guys who could be pivotal in Oklahoma moving to 7-0 on Saturday night as the Sooners host the TCU Horned Frogs.

TCU punt returner Derius Davis is averaging 10.2 yards on punt returns so far this season, but he’s a big play waiting to happen. He led the Big 12 and ranked fifth in the nation last year, averaging 14.5 yards per return, and he was one of just three FBS players with two punt return TDs in 2020. He ranks second in school history with three runbacks on punt returns on just 21 career attempts. On kickoff returns, J.D. Spielman ranks No. 4 in the nation on kickoff returns, averaging 33.6 yards. He ran back the opening kickoff 87 yards against Texas and had three special teams TDs during his time at Nebraska, including a 99-yard kickoff return. For Oklahoma, that means taking extreme caution on kicks. Michael Turk needs to utilize the sidelines and extend his hang time with high punts, and Brkic needs to consistently produce touchbacks after OU scores. TCU excels at special teams returns, and the Sooner kickers must minimize the Horned Frogs’ advantage.

A new OU quarterback should bring some new offensive wrinkles. Caleb Williams' legs are a major weapon that Spencer Rattler lacked, and as a result, it will be much easier for the Sooners to put the TCU linebacking core in conflict on Saturday night. As a result, some windows to throw over the middle of the field should open up that weren't always there for Rattler. Enter Brayden Willis. The tight end/H-back is a physical mismatch for most defenses, and Williams already proved he's willing to throw the ball in Willis' direction in the Cotton Bowl. While Marvin Mims, Jadon Haselwood and Austin Stogner should get theirs, a new weapon could emerge for the Oklahoma offense on Saturday night.

Billy Bowman had a bit of a tough day last weekend at the Cotton Bowl, so how about a bounce back performance back at home against TCU? If the Sooners are going to wreak havoc and cause some turnovers, Bowman could be at the center of that. He has done some good things this season and is clearly the best option at the nickel spot, but that breakout night where you really feel his impact on the game hasn’t quite happened yet. This just feels like it has the chance to be just that against a solid TCU team and in an atmosphere that should be electric. Bowman has to be tired of everyone showing Bijan Robinson’s stiff arm against him from last Saturday, so this is the chance to erase that negative memory with a positive one with some big plays against the Horned Frogs.

Another major decommitment in Oklahoma’s 2023 recruiting class has come down Saturday evening - this time from inside the state. 4-star tight end Luke Hasz announced on Twitter that he is rescinding his commitment to the Sooners, joining a plethora of other recruits to do so in the aftermath of former head coach Lincoln Riley leaving to take over at USC.
OKLAHOMA STATE・9 HOURS AGO
AllSooners

The Jennie Baranczyk era seems to be gaining steam. Oklahoma improved to 7-1 on Saturday with a dominating 94-63 wipeout victory over Mississippi State at Lloyd Noble Center. The Sooners won their fourth in a row and were impressive from start to finish in their part of the Big 12/SEC Challenge.
OKLAHOMA STATE・10 HOURS AGO
AllSooners

Another major Oklahoma commit appears to be hanging tough with the Sooner. Jake Taylor, a 4-star offensive tackle from Bishop Gorman High School in Las Vegas, reaffirmed his pledge to OU in a Twitter statement on Friday morning. Taylor posted a photo posing with current OU running backs coach and...
OKLAHOMA STATE・1 DAY AGO
AllSooners

While the obvious attention of Oklahoma fans currently reside in the ongoing search to find the replacement for former head coach Lincoln Riley, the Sooners still have another game to play to conclude the 2021 season. When they do so, it will be under interim head coach Bob Stoops -...
OKLAHOMA STATE・1 DAY AGO

Another Oklahoma player has hit the transfer portal. In the aftermath of former head coach Lincoln Riley leaving the Sooners to head west to take over at USC, several Sooners have elected to enter the transfer portal to look for a new destination moving forward. Redshirt junior offensive lineman Brey...
OKLAHOMA STATE・1 DAY AGO
AllSooners

CORRECTION: Georgia DC Dan Lanning in the Mix, but No OU Coaching Decision Yet

EDITOR'S NOTE: Earlier Saturday night, SI Sooners inadvertently published a story reporting that Georgia defensive coordinator Dan Lanning was being hired as the next head football coach at the University of Oklahoma. As of 8:30 p.m. Saturday night, Oklahoma has not named its new head coach. SI Sooners regrets the error.
GEORGIA STATE・8 HOURS AGO
AllSooners

Nobody — not even Bob Stoops — knows what Joe Castiglione is going to do. But Oklahoma’s new interim football coach is connected enough to his athletic director that he can confidently offer what almost looks like a timetable for hiring the Sooners’ new coach. “I would anticipate this weekend...
OKLAHOMA STATE・1 DAY AGO
AllSooners

For the third time this week, a former Oklahoma recruit has flipped to join Lincoln Riley and the USC Trojans. Following in the footsteps of Malachi Nelson and Raleek Brown, 2023 5-star athlete Makai Lemon announced his commitment to the Trojans on Friday. Like Nelson, Lemon hails from nearby Los...
OKLAHOMA STATE・1 DAY AGO

The college football regular season has come to an end which means it is now awards season across the country. While Oklahoma missed out on competing for a Big 12 title this week in Arlington and didn't pick any yearly conference awards, nine Sooners were still named to the All-Big 12 teams on Thursday.
COLLEGE SPORTS・2 DAYS AGO
AllSooners

Another Oklahoma-to-USC recruiting flip is complete. Raleek Brown, elite 2022 running back and slot receiver prospect, made his verbal commitment to the Trojans official. All the way back in February, Brown committed to Lincoln Riley at Oklahoma, but even while Riley was in Norman there were grumblings that the Sooners would have to fight off the Trojans to the bitter end.
NORMAN, OK・2 DAYS AGO
AllSooners

Oklahoma’s coaching search is winding down. Multiple sources close to the situation have confirmed to SI Sooners that plans are being made for OU athletic director Joe Castiglione to stage an introductory press conference on Sunday or possibly early Monday. It's unknown when an announcement could be made, although it...
COLLEGE SPORTS・1 DAY AGO
AllSooners

Although Oklahoma athletic director Joe Castiglione said Monday there would be candidates “lined up at the door” to replace Lincoln Riley, it appears he’s already begun to narrow his focus on just a few names. “People are reaching out that, some people would never believe would have interest in it,”...
OKLAHOMA STATE・2 DAYS AGO

He burst onto the scene quite unlike any player in recent memory, and now he is getting recognized for it. Oklahoma true freshman quarterback Caleb Williams got one step closer to earning some hardware on Thursday as he was named one of 14 semifinalists for the Shaun Alexander Award which is presented annually to the nation’s most outstanding freshman player.
OKLAHOMA STATE・2 DAYS AGO
AllSooners

Oklahoma football just dropped some news, but no, it’s not a new head coach. The Big 12 has released the 2022 football schedule, filling out the rest of OU’s slate for the upcoming season. The Sooners will open the season on Sept. 3 against UTEP, and then they’ll host Kent...
OKLAHOMA STATE・3 DAYS AGO
AllSooners

Adding to his legacy at Oklahoma, Bob Stoops apparently declined compensation to be the Sooners’ interim head coach following Lincoln Riley’s shocking departure for USC. That’s what OU president Joe Harroz told reporters on Thursday after a meeting of the OU Board of Regents in Oklahoma City. According to Harroz, Stoops said there was no need to pay him and actually declined the offer twice before Harroz and OU athletic director Joe Castiglione insisted.
OKLAHOMA STATE・2 DAYS AGO
AllSooners

Watch Oklahoma head coach Porter Moser's full postgame press conference following the Sooners' 74-67 win over the No. 14 Florida Gators on Wednesday, Dec. 1 at the Lloyd Noble Center in Norman. Want to join the discussion? Click here to become a member of the AllSooners message board community today!
OKLAHOMA STATE・3 DAYS AGO

A pair of Oklahoma wide receivers entered their names into the transfer portal on Wednesday with junior Theo Wease and redshirt sophomore Jaden Haselwood finalizing their decisions to begin the searc for a new school. Wease had been previously reported as intending to enter on Monday, so his move now...
OKLAHOMA STATE・3 DAYS AGO
AllSooners

Lincoln Riley’s move to USC sent Oklahoma into their first real head coaching search since 1998. On Monday, athletic director Joe Castiglione said people “would never believe” some of the names who have reached out expressing interest in taking the job, and that the Sooners will leave no stone unturned searching for the right fit for the program.
OKLAHOMA STATE・4 DAYS AGO
AllSooners

Watch SI Sooners' highlights from Oklahoma's 74-67 win over the No. 14 Florida Gators on Wednesday, Dec. 1 at the Lloyd Noble Center in Norman. Want to join the discussion? Click here to become a member of the AllSooners message board community today!. Sign up for your premium membership to...
NORMAN, OK・3 DAYS AGO