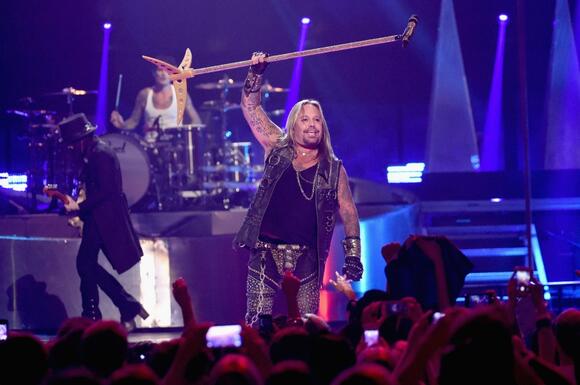 ( WJW ) – Mötley Crüe singer Vince Neil accidentally stepped off stage during a concert on Friday and broke his ribs, a guitarist for Neil’s band appeared to tell attendees in footage taken during the show.

Neil was performing at the Tennessee Monsters on the Mountain music festival in Pigeon Forge with his own band, and not Mötley Crüe. Neil was one of the festival’s headliners.

The 60-year-old was only a few songs into his set when he stepped to the edge of the stage and tumbled four feet onto the cement, TMZ reported.

In a video that began circulating on social media after Friday’s concert, one of the band members — identified as bass guitarist Dana Strum by Rolling Stone — took the microphone and informed the crowd of what had happened.

“The truth is, Vince fell and broke ribs when he fell,” he told the crowd. “Now that sucks for us and him. He was so excited to be here. He lives in Tennessee.”

The guitarist added that Neil offered to “stick it out” and finish the set, but was instead getting medical treatment for his injuries.

Eddie Trunk, a radio DJ with SiriusXM and one of the festival’s hosts, confirmed that Neil was taken to the hospital.

Neil is next scheduled to perform with Mötley Crüe on The Stadium Tour in June 2022.

Brass Against apologises after singer urinates on fan during live show

New York-based band Brass Against have apologised after its lead singer urinated on the face of a fan at the Welcome to Rockville festival in Florida. The wild event was captured on video and went viral across social media, shows Brass Against lead singer Sophia Urista revealing to the crowd that she “gotta pee” and “can’t make it to the bathroom”.
MUSIC・13 DAYS AGO
People

The Voice's Wendy Moten took a bit of a tumble on Tuesday night's episode, but assured fans she was "OK" after a commercial break. The singer, who celebrated her 57th birthday on Monday, performed onstage during the reality competition show's live results episode the following evening alongside her coach Blake Shelton and fellow team members Lana Scott and Paris Winningham.
TV & VIDEOS・4 DAYS AGO
Popculture

Popular and Grammy-Nominated Singer Dead at 26 After Plane Crash

Brazilian singer Marília Mendonça was died in a plane crash, her representatives confirmed in a statement on her Instagram page. She was 26. Four other people died in the crash, which remains under investigation. Mendonça was on her way to perform in Caratinga. The plane crashed in the state of...
CELEBRITIES・22 DAYS AGO

Actor and producer Heath Freeman, known for his roles in "NCIS" and "Bones," has died at the age of 41, his manager announced Tuesday.
CELEBRITIES・11 DAYS AGO
Hello Magazine

Willow Smith kicked off her 21st birthday with an epic Halloween party in a costume that made fans lose it. The Whip My Hair crooner looked beyond stunning as she transformed into Brad Pitt’s Fight Club character Tyler Durden for the fete, giving the look a high-fashion twist we won’t soon forget.
BEAUTY & FASHION・26 DAYS AGO
HollywoodLife

Paul McCartney and his daughter Mary had a father-daughter date night at the premiere of the upcoming docuseries ‘The Beatles: Get Back’ in London. It was a family affair at the London premiere of The Beatles: Get Back, an upcoming three-part documentary series that will offer Beatles fans an intimate glimpse of the band’s most pivotal recording sessions. Former Beatle Paul McCartney attended the premiere on Tuesday, Nov. 16 with daughter Mary, 52. The 79-year-old musician was all smiles as he posed with his photographer daughter on the red carpet, wearing a sharp navy blue suit.
MUSIC・11 DAYS AGO
extratv

Actor George Clooney, 60, is opening up about the shocking moment he found out his wife Amal was expecting twins. Clooney shared the story on the “WTF with Marc Maron” podcast, saying he never thought having a family was in the cards for him. "Listen, I didn't want to get...
CELEBRITIES・11 DAYS AGO

Angelina Jolie took two of her kids, Shiloh and Pax, to the premiere of a French photographer’s documentary on Nov. 18, and they all posed together on the red carpet. Shiloh Jolie-Pitt, 15, stepped out for another red carpet appearance on Nov. 18. This time, she joined her mom, Angelina Jolie, and older brother, Pax Jolie-Pitt, 17, at the premiere of French photographer, JR’s, documentary, Paper & Glue, at the Museum of Tolerance in Los Angeles. The trio posed for photos with JR before the big event, with Angelina and Pax standing to one side of the artist and Shiloh standing solo on the other.
LOS ANGELES, CA・8 DAYS AGO
Indy100

Emily Ratajkowski has explained why Pete Davidson is seen as attractive to so many women and she has given him a pretty good review. Speaking on Late Night With Seth Meyers to promote her new memoir, the model waxed lyrical about the comedian’s charms and questioned why some people don’t understand how he is such a successful dater.
CELEBRITIES・17 DAYS AGO
HollywoodLife

Ariana Grande was engaged to Pete Davidson before tying the knot with husband Dalton Gomez, but she isn’t fazed by his new romance with Kim Kardashian. Ariana Grande, 28, is happier than ever, and seemingly hasn’t paid any mind to who her ex-fiance Pete Davidson is romancing. The 27-year-old Saturday Night Live comedian has been spotted on multiple romantic dates with Kim Kardashian, 41, however, the “Into You” singer is unfazed. “Pete and Ariana have both dated other people since they called off their engagement. Ariana is married now and happier than ever,” a source close to the chart-topper told HollywoodLife exclusively.
CELEBRITIES・22 DAYS AGO
demotix.com

Kanye West seems to be in denial about his current relationship status. A few days ago, Ye made an appearance at Revolt TV when he was asked to comment on recent rumors about Kim Kardashian and Pete Davidson’s supposed romance. Wiggling his way out of the uncomfortable question, Kanye spun...
CELEBRITIES・18 DAYS AGO

Pete Davidson says he takes women to good restaurants in case he's a "shitty" date. Speaking on "River Cafe Table 4" podcast, he said if he's a bad date, "at least the food was great." Davidson also told host Ruthie Rogers that dates who are rude to waiting staff are...
BEAUTY & FASHION・10 DAYS AGO
US Magazine

Supportive! Kim Kardashian is still exploring her relationship with Pete Davidson, but he has already won over her famous family. “The family is happy for Kim, and they really have taken a liking to Pete,” a source exclusively tells Us Weekly. “A lot of the Kardashians met him in the past and have hung out with him, so he’s not like this new stranger that just entered into their lives. They think he’s funny and is fun to be around. He’s someone that just lightens the mood in the room.”
CELEBRITIES・8 DAYS AGO
editorials24.com

Pete Davidson has turned into quite the Casanova, so how does he pick who to date next?. In Tuesday’s episode of iHeartRadio’s River Cafe Table 4 with Ruthie Rodgers, the Saturday Night Live star admitted that he’s figured out the best way to determine if a girl is worth a second date and how to make himself look good in the process. Sharing his top-notch dating tip, the comedian expressed:
CELEBRITIES・11 DAYS AGO
udiscovermusic.com

Fresh off earning her first No.1 album on the Billboard 200, R&B star Summer Walker has been announced as the latest performer at the 2021 Soul Train Awards, which tapes at the Apollo Theater in Harlem on Saturday and airs on November 28. Walker’s sophomore album, Still Over It, earned...
CELEBRITIES・7 DAYS AGO

How Much Is Travis Scott Worth?

Travis Scott made headlines on Sunday, Nov. 7 after a mass casualty event at his sold-out Astroworld music festival in Houston that killed eight people and injured many more. Scott was on stage...
BEAUTY & FASHION・19 DAYS AGO
E! News

The world has lost a rising talent. Thomas Wells, who competed on The X Factor among other reality shows, died on November 13, his wife Jessica Wells wrote on Facebook. He was 46. "I feel like it's not real but I know it is," she shared in a heart-wrenching videotaped...
CELEBRITIES・1 DAY AGO
Inside the Magic

While the Disney Parks tend to do a fantastic job creating entertainment for Guests, especially when it comes to their stage shows, things can always go wrong. Although this does not often happen, when it does, Disney does their best to make the show go on. But of course, there are instances in which the circumstances cause for the show to come to a stop if there is a technical aspect causing an issue, or perhaps a performer who cannot go on.
LIFESTYLE・13 DAYS AGO
Popculture

Love & Hip Hop: Miami star Amara Le Negra is getting double the blessing as she's expecting her first two babies! The Afro Latina beauty known for her big fro and flawless skin is basking in her pregnancy. Le Negra announced the happy news in November with a beautiful maternity shoot featuring her own mother. Since then, she's been showing off her growing baby bump, even sharing that she's expecting two girls.
CELEBRITIES・3 DAYS AGO