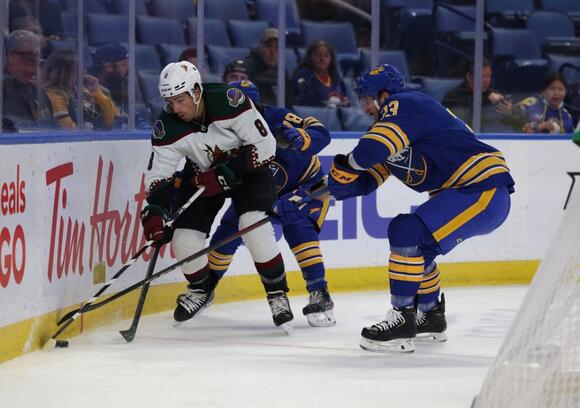 Cody Eakin scored in regulation and Tage Thompson and Arttu Ruotsalainen scored in the shootout to lift the host Buffalo Sabres to a 2-1 win against the Arizona Coyotes on Saturday afternoon.

Dustin Tokarski made 20 saves for Buffalo, which has won its first two games after finishing with the fewest points in the NHL last season.

Andrew Ladd scored, and Karel Vejmelka made 32 saves for Arizona.

Thompson and Nick Schmaltz of Arizona made their shootout attempts in the first round, and Ruotsalainen made his attempt to start the second before Tokarski stopped Phil Kessel’s attempt with his pads.

Victor Olofsson of the Sabres missed the net to start the third round, but Clayton Keller of the Coyotes also missed, clinching the win for Buffalo.

Buffalo had some chances to end the game in overtime, topped by a shot from in close by Olofsson that was saved by Vejmelka at 1:41.

Tokarski tried to clear the puck along the boards but Johan Larsson kept it in the Buffalo zone. He brought the puck back below the goal line and then passed it to Ryan Dzingel behind the net. He quickly fed Ladd in front of the crease for the one-timer.

Eakin drew a hooking penalty on Jay Beagle with 48 seconds left in the first period and then tied the score 1-1 with a power-play goal at 1:05 of the second.

Sabres defenseman Rasmus Dahlin brought the puck out of his zone and fed the puck ahead to Drake Caggiula cutting down the middle of the Arizona zone.

Caggiula went one-on-one with Vejmelka, who made the initial save, but Eakin came in behind and pushed the puck into the net.

Buffalo was without two of its top players, who were injured in the 5-1 season-opening win against the visiting Montreal Canadiens on Thursday.

The Bruins scored four times in the first period in a 5-1 win against the host Buffalo Sabres on Wednesday.
NHL・11 DAYS AGO
The State

Jack Roslovic had two goals and an assist to lead the Columbus Blue Jackets past the Buffalo Sabres 7-4 on Monday night. Roslovic and defenseman Vladislav Gavrikov each scored his first two goals of the season for Columbus. Max Domi added a goal and two assists, and Joonas Korpisalo made 29 saves fresh off a two-game West Coast trip to give the Blue Jackets their third victory in four games.
NHL・13 DAYS AGO
Sportsnaut

Jack Roslovic had two goals and an assist, and the visiting Columbus Blue Jackets defeated the Buffalo Sabres 7-4 on
NHL・13 DAYS AGO
fiveforhowling.com

The Arizona Coyotes have slowly gotten better as the season has gone on, and they earned their third win last night and now just trail the Seattle Kraken and Ottawa Senators by one. It’s probably a bittersweet feeling for Coyotes’ fans, who want Shane Wright but are also tired of watching an uninspired, losing team. Nonetheless, it’s great for team morale and the younger players, and they’ll look to build off of it with a win in California against the Los Angeles Kings.
NHL・14 DAYS AGO

Kyle Capobianco scored the overtime winner and Travis Boyd collected one goal and one assist to give the visiting Arizona Coyotes a 2-1 victory over the Los Angeles Kings on Sunday. Goaltender Karel Vejmelka made 37 saves for his first NHL victory after suffering 10 losses to start his career....
NHL・14 DAYS AGO
1stohiobattery.com

7 P.M. – MONDAY, NOVEMBER 22. Entering the season, the expectations for both the Columbus Blue Jackets and the Buffalo Sabres were about as low as it can get. Nearly six weeks into the season though, and neither team has fallen off the face of the earth as the experts foresaw — yet.
NHL・14 DAYS AGO
jacketscannon.com

A win is a win no matter how it goes down. It was a sloppy affair Monday night when the Columbus Blue Jackets defeated the Buffalo Sabres by a final score of 7-4. The Jackets went up by three goals in the second period and ended up winning a nail biter, so don’t be deceived by the three goal differential. They end their mini road trip with a 2-1 record. Let’s take a look at how it happened.
NHL・13 DAYS AGO
fiveforhowling.com

Don’t look now, but the Arizona Coyotes are on a winning streak. After starting the season 0-10-1, the Coyotes have a two-game win streak and a four-game point streak after beating the Los Angeles Kings 2-1 in regulation. It was another game where the Coyotes didn’t look great throughout, and...
NHL・13 DAYS AGO

Saturday’s game against the Detroit Red Wings was an emotional one for the Arizona Coyotes. For one, the team kicked off its Hockey Fights Cancer night by honoring its Senior Director of Amateur Hockey Development, Matt Shott, who is battling cancer. Just hours later, forward Clayton Keller completed a furious...
NHL・14 DAYS AGO
tucsonpost.com

Jason Robertson tallied the game-winning goal and added an assist as the Dallas Stars claimed their fourth straight win Saturday in a 3-2 decision over the Arizona Coyotes in Glendale, Ariz. Robertson broke a 2-2 tie midway through the second as the Stars won for the sixth time in their...
NHL・8 DAYS AGO
WGR550

After losing four-straight games regulation, the Buffalo Sabres found the Montreal Canadiens on their doorstop on Friday night and sent them packing almost as soon as the opening faceoff. TJ Luckman has more with his three observations:
NHL・9 DAYS AGO
WGR550

The Sabres were hoping for a better matchup at home against the NHL’s newest team. Unfortunately, the Kraken picked up where they left off from the last time the two teams played. TJ Luckman has his three observations from the game:
NHL・6 DAYS AGO

Tage Thompson goals bookended the night for the Buffalo Sabres in their 4-1 win over the Montreal Canadiens on Friday night at KeyBank Center. The win snapped the team's four-game losing streak in the process. Thompson wasted little time getting the Sabres on the score sheet and giving the team...
NHL・9 DAYS AGO
MLive

After an abysmal road trip out west, the Detroit Red Wings returned home in a big way on Wednesday, and now look to take that confidence into a Saturday night clash with a Atlantic Division foe in the Buffalo Sabres on Saturday night. Detroit lost four-straight games heading into their...
NHL・9 DAYS AGO
visitsaintpaul.com

On November 30, 2021, the Minnesota Wild will play against the Arizona Coyotes at the Xcel Energy Center in Saint Paul.
NHL・6 DAYS AGO
96.1 The Breeze

The Buffalo Sabres had a great start to the 2021-2022 season, with a 5-1-1 record, but have since fallen back in the Atlantic Division and Eastern Conference Standings. Buffalo has a very young roster with inexperience, and while they have played better overall than last year's horrendous team, the lack of depth is evident.
NHL・3 DAYS AGO

The Arizona Coyotes will not be headed to Houston or Quebec City, the team said in an emphatic statement released Thursday, shortly after a report said relocation could be coming soon for the franchise. "This is false. Totally false. We're not selling. We're not moving. The Coyotes are 100 percent...
NHL・3 DAYS AGO
WGR550

It’s the first meeting between the Sabres and Hurricanes since Nov. 14, 2019. That night, Carolina emerged victorious in OT, 5-4, at KeyBank Center. Tonight, Buffalo debuts a new goalie - Malcolm Subban, acquired Thursday from the Chicago Blackhawks.
NHL・1 DAY AGO
FanSided

Tonight, the Carolina Hurricanes have the task of playing the floundering Buffalo Sabres. Carolina is desperate for two points at this moment, and they need to do whatever it takes to see the organization get back to winning ways. Going 1-4-1 in the last 6 is a major concern, and a team like Buffalo coming into PNC Arena could be the perfect antidote before starting another Western road trip.
NHL・1 DAY AGO
diebytheblade.com