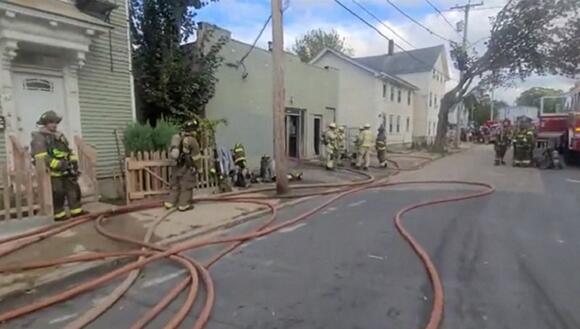 The fire was reported shortly before 3 p.m., leading to an extensive response by crews.

Deputy Fire Chief Mahoney told 12 News, they were unable to attack the flames from the inside due to “extensive hoarding.” And at one point, fire crews were afraid the roof might collapse.

“We couldn’t get five feet inside the building between the zero visibility and high heat, we couldn’t determine where the seed of the fire actually was,” Mahony said.

Mahoney said the fire caused cinder blocks on the side of the building to crack, and another concern was the close proximity of houses.

“We placed lines in between those two early in the incident, we had no extension to that structure,” he said.

The building was vacant at the time of the fire, according to Mahoney.

No firefighters were injured battling the fire.

Mahoney said the building is no longer safe to enter.

Officials responded to Myles Standish Boulevard just before midnight and found the car on its roof.
TAUNTON, MA・13 HOURS AGO
WPRI 12 News

A house caught fire on Royal Drive in West Warwick, leaving damage to the front of the building.
WEST WARWICK, RI・3 DAYS AGO

Police said both dogs "appeared to have been abandoned, lethargic and emaciated."
PORTSMOUTH, RI・3 HOURS AGO
WPRI 12 News

One woman is recovering after her house went up in flames Thanksgiving night.
PROVIDENCE, RI・3 DAYS AGO
WPRI 12 News

WEST WARWICK, R.I. (WPRI) — The community is rallying around a West Warwick family who lost their home and two cats in a devastating fire on Thanksgiving Day. A GoFundMe account has been established with a goal of raising $30,000. Fire crews were called to the home on Royal Drive shortly before 8 p.m. on […]
WEST WARWICK, RI・2 DAYS AGO

Police in Fall River are asking for the public's help identifying the person involved in an armed robbery in the city.
FALL RIVER, MA・2 HOURS AGO
WPRI 12 News

PROVIDENCE, R.I. (WPRI) — Four teenagers were arrested after crashing a stolen car near Atwells Avenue on Saturday, according to Providence Police Commander Thomas Verdi. Verdi said three of the teens are 15-years-old and one is 16-years-old. The vehicle the teens were driving crashed into three cars. Verdi said two of those cars were parked […]
PROVIDENCE, RI・1 DAY AGO
WPRI 12 News

Massachusetts State Police Troopers are currently investigating a crash that caused the death of a man from Rumford.
MASSACHUSETTS STATE・4 DAYS AGO
WPRI 12 News

Police had to respond to a residence on Davids Street shortly before 1:30 a.m. Friday morning following calls of a shooting.
BROCKTON, MA・2 DAYS AGO
WPRI 12 News

At least 1 injured in shooting at mall in Tacoma, Washington

Police said Joseph Irizarry, 41, stabbed a 59-year-old man in the abdomen during an argument on Boylston Street.
MASSACHUSETTS STATE・5 DAYS AGO