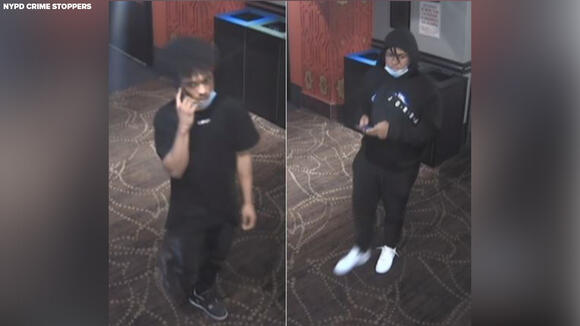 An elderly woman was attacked and robbed of her purse inside a movie theater in Manhattan. Police say the incident happened nearly two weeks ago on Sunday, October 3, just before 7 p.m. According to authorities, three individuals approached an 82-year-old woman as she sat watching a movie inside an AMC theater, located at 1998 Broadway on the Upper West Side. A struggle ensued after suspects grabbed and removed the victim's bag, which contained credit cards and a cell phone. ALSO READ | Teen girl shot in head in Brooklyn park released from hospital

The suspects then fled the theater. Fortunately, the victim was not injured during the incident. Police have released photos of two of three suspects. RELATED | 16-year-old shot, killed at busy intersection on Lower East Side of Manhattan

Police say a 16-year-old male was pronounced dead after he was shot at the intersection of Delancey Street and Suffolk Street on the Lower East Side.

Anyone with information in regard to this incident is asked to call the NYPD's Crime Stoppers Hotline at 1-800-577-TIPS (8477) or for Spanish, 1-888-57-PISTA (74782). The public can also submit their tips by logging onto the CrimeStoppers website at https://crimestoppers.nypdonline.org/ or on Twitter @NYPDTips. ---------- * Get Eyewitness News Delivered * More Manhattan news * Send us a news tip * Download the abc7NY app for breaking news alerts * Follow us on YouTube

I may go trick or treating dressed as an old lady with my glock.

The teen's family said he has big dreams to go into real estate and had been helping at his father's business on the weekends when he's not in school.
BROOKLYN, NY・1 DAY AGO

Officials say a man is in custody after stealing a school bus and crashing into several parked cars along the way.
BROOKLYN, NY・17 HOURS AGO
ABCNY

Before starting his training as a firefighter, Vincent Malveaux worked as an EMT for four years including throughout the coronavirus pandemic.
NEW YORK CITY, NY・4 HOURS AGO
ABCNY

Police have arrested a suspect in a shooting that killed an Uber driver in September in Harlem.
PUBLIC SAFETY・23 HOURS AGO

Officials are investigating how an anti-vaccination ad, designed to look like a New York City ad encouraging vaccination, somehow ended up in a bus stop in Brooklyn.
BROOKLYN, NY・23 HOURS AGO
ABCNY

They are accused of slapping a 3-year-old boy across the face last Friday. Police say the women approached an 18-year-old girl Sunday and pulled her to the ground.
BROOKLYN, NY・2 DAYS AGO
ABCNY

Suffolk Officer Tim Thrane, who spent weeks in a medically induced coma after being hit by an alleged drunk driver, was discharged to cheers Friday.
SUFFOLK COUNTY, NY・3 HOURS AGO
ABCNY

Two MTA workers were honored by the transit authority on Tuesday for their actions during an emergency service delay.
MANHATTAN, NY・3 DAYS AGO