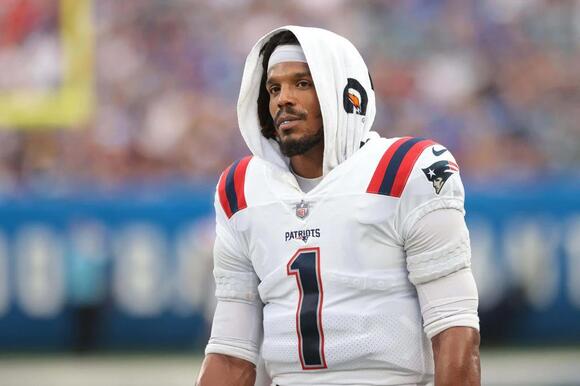 Immediately after Cam Newton’ s release from the New England Patriots prior to Week 1, many assumed it wouldn’t be long before another team signed the 2015 NFL MVP.

Personally, I figured Newton would have landed with another team quickly, possibly in a role with a chance to compete for the starting gig somewhere, perhaps with the Houston Texans. Obviously, it never happened, but now Newton is back in the news after he decided to get vaccinated . Could his new status make a team, or some teams more inclined to offer Newton what he’s looking for on the open market?

While Newton is still reportedly holding out for a starting role, the league currently has very few opportunities available. Here are five NFL teams who should still look to sign Newton as soon as possible.

The 2021 rookie class of quarterbacks haven’t experienced as much immediate success as we saw from Justin Herbert and Joe Burrow in 2020. New York Jets rookie Zach Wilson has thrown nine interceptions, more than any other NFL QB through five games. In fact, the Jets’ signal-caller is on pace to break Peyton Manning’s record for the most interceptions by a rookie quarterback in NFL history (28).

At 1-4, Gang Green won’t be competing for the playoffs this season and while it’s hard to argue against pulling the player they selected second overall just months ago, it might serve Wilson well to learn from the bench for a bit. It wouldn’t surprise anyone if coach Robert Saleh removed Wilson late in the season if the Jets find themselves at say 3-12 with Wilson on the cusp of shattering Manning’s interception record.

Having someone like Newton offers a chance to see how the offense operates with a veteran under center while protecting their young quarterback from any further embarrassment. It also wouldn’t hurt to have a more capable backup. 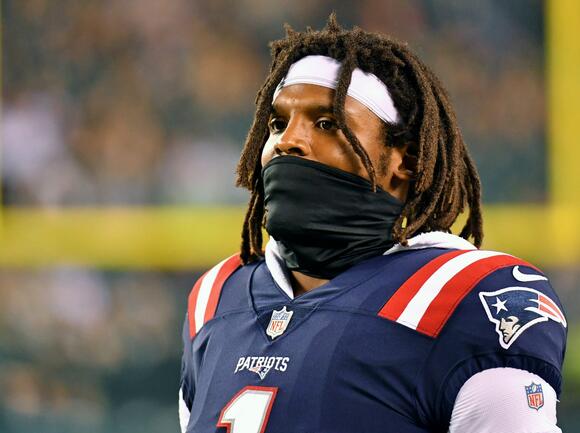 Back from injury, Dallas Cowboys quarterback Dak Prescott looks as good as ever. However, what if… I shouldn’t say it. But the Cowboys need a viable backup QB. Being that Prescott’s status as a starter is firmly entrenched, having Newton looking over his shoulder shouldn’t be an issue for either ego, er quarterback.

The best part is the Cowboys could still use Newton in goal-line scenarios, creating the ultimate triple-option threat without putting their franchise guy in harm’s way. Newton can use his strong frame to take the beating when keeping the ball, while still surprising teams with a red zone toss here and there. Come on Jerry, make it happen.

Though Geno Smith is finally getting his chance to start again after sitting on benches in various cities since 2017, his current status as a competent leader with potential may not last long. He looked refreshing in limited action filling in for Russell Wilson in Week 5, but Smith is who he is at this point. You can’t convince me Cam Newton wouldn’t be a superior option for the Seattle Seahawks in the long run, especially if Russ got traded .

If the Detroit Lions made the move to sign Cam Newton, things could get awkward quickly for Jared Goff . Sure, the Lions just traded for Goff in the 2021 offseason, but Mr. Perfect is Mr. Winless so far through five games. The Lions will realize he just isn’t a franchise quarterback. Getting a free look at someone who also led his team to the Super Bowl in Cam Newton wouldn’t be a terrible idea before they select someone else in the 2022 NFL Draft . 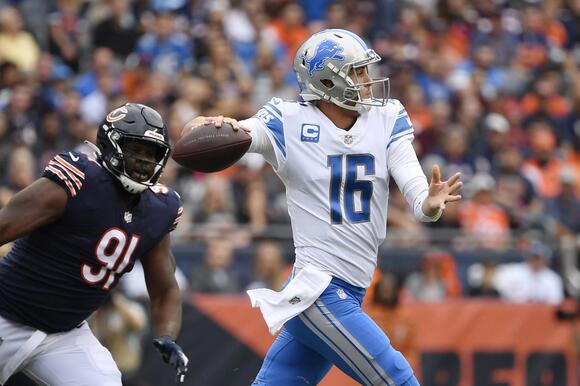 After some offseason intrigue from a brief competition with Taysom Hill , it’s safe to say Jameis Winston has the keys to the offense in the Big Easy. He’s playing differently than he ever has in the NFL, no longer being asked to drop back 40 times per game, Winston is averaging a career-low amount of yardage per game. On the positive side, Winston is avoiding turnovers better than before.

Still, the New Orleans Saints just aren’t experiencing the same high-powered offense we’ve come to expect from Sean Payton for so many years being paired with Drew Brees. I’m not saying Newton would provide more downfield for the Saints, they need to upgrade their receiving corps, but if things don’t go according to plan with Winston, why not look into signing a three-time Pro Bowl quarterback who’s still just 32?

The Geno Smith Show is coming to an end for the Seattle Seahawks. Quarterback Russell Wilson was activated from injured reserve on Friday, the Seahawks announced. Wilson suffered two injures in his middle finger on Oct. 7 and hasn’t played since. He had a tendon rupture and a dislocation, and the initial recovery timeline was six weeks.
NFL・16 DAYS AGO
The Spun

The Pittsburgh Steelers were hit with some tough news on Saturday night. Less than 24 hours before the Steelers kickoff against the Detroit Lions, starting quarterback Ben Roethlisberger has been placed on the COVID-19/reserve list. Pittsburgh was a heavy favorite heading into tomorrow’s contest against the 0-8 Lions at Heinz...
NFL・15 DAYS AGO
NOLA.com

Peyton Manning explains why he's no longer a Saints fan. 'It hurts a little.'

Peyton and Eli Manning often like to get in jabs at each other during their Monday Night Football ManningCast, and the Giants-Buccaneers game was no different. Eli playfully took Peyton to task for his lack of loyalty when it comes to his NFL allegiances during an interview with former Secretary of State Condoleezza Rice.
NFL・6 DAYS AGO

FRISCO - Could Dallas Cowboys Hall-of-Fame quarterback Troy Aikman be changing TV jobs?. Amazon is taking over the NFL’s Thursday Night Football broadcasts next year, and the company reportedly wants to make a gigantic move involving its announcing lineup. And including Aikman would be gigantic. According to Mike McCarthy of...
NFL・12 DAYS AGO
The Spun

With two losses in just five days, a lot of the luster has come off the Dallas Cowboys. But Cowboys owner Jerry Jones doesn’t plan on hitting the panic button anytime soon. In an interview with 105.3 The Fan on Friday, Jones lamented that his team couldn’t put enough pressure on Las Vegas Raiders quarterback Derek Carr yesterday. But he made it clear that the defense will improve and “the sky is not falling.”
NFL・3 DAYS AGO
featureweekly.com

The Dallas Cowboys will be missing wide receiver Amari Cooper for at least two of their three games in a 12-day span, beginning Sunday against the Kansas City Chiefs. Cooper was placed on the reserve/COVID-19 list on Friday. Cooper tested positive for COVID-19 and is unvaccinated, according to ESPN, which...
NFL・9 DAYS AGO
Sporting News

Why did the Panthers bench Cam Newton? Matt Rhule gives odd reason for taking out QB

The Cam Newton reunion tour came to a halt on Sunday. The Panthers QB had a really, really bad day vs. the Dolphins, throwing two interceptions and locking down a paltry 5.8 passer rating in his team's 33-10 loss. Newton, though, didn't have an opportunity to close out the game....
NFL・22 HOURS AGO

There were a lot of rough moments for the Dallas Cowboys in yesterday’s game against the Las Vegas Raiders. But the low point might have been seeing one of their players ejected for a fight. Cowboys special teams player Kelvin Joseph got into a scuffle with Raiders special teams player...
NFL・3 DAYS AGO
ClutchPoints

Russell Wilson’s net worth in 2021

Cam Newton is one of the best quarterbacks that the NFL has seen in the past decade. He is a nightmare for every team’s defenses as he can attack them by passing or rushing it himself. For this one, let’s take a look at Cam Newton’s net worth in 2021.
NFL・10 DAYS AGO
ClutchPoints

After a standout start in his return to the Carolina Panthers, quarterback Cam Newton had his fair share of struggles in his team’s Week 12 road loss to the Miami Dolphins. The Panthers offense once again faced stout difficulties in stringing together multiple touchdown drives over a game. Newton led the offense to a mere one touchdown drive, while the Panthers averaged a lowly 3.7 yards per play against the Dolphins. This led to Panthers head coach Matt Rhule opting to bench Newton over the second half in favor of backup quarter P.J. Walker.
NFL・19 HOURS AGO

Who is CeeDee Lamb’s Girlfriend? Know all about Crymson Rose

Cedarian Lamb, popularly known as “CeeDee,” is a star wide receiver who features for the Dallas Cowboys of the National Football League. Born on April 8, 1999, CeeDee played college football at Oklahoma where he achieved great laurels. In the 2017 season, he featured in all 14 games, posting 46 receptions for 807 yards and seven touchdowns.
NFL・2 DAYS AGO
The Spun

It’ll be another week without star quarterback Kyler Murray for the Arizona Cardinals. Murray, who’s been dealing with an ankle injury, has missed multiple games for the NFC West franchise. He’ll miss another one on Sunday afternoon. The Cardinals announced on Sunday that Murray is officially inactive for this afternoon’s...
NFL・8 DAYS AGO
FanSided

The Dallas Cowboys clearly have something in running back Tony Pollard. Here are three hypothetical trade destinations for Ezekiel Elliott if they were to plan on moving him. The Dallas Cowboys participated in a thrilling Thanksgiving Day game against the Las Vegas Raiders. Even though they forced overtime, it was the Raiders who left AT&T Stadium with the 36-33 victory.
NFL・3 DAYS AGO
ClutchPoints

After almost a year-long break, veteran running back Adrian Peterson found his way back to the league once again after being signed by the Tennessee Titans in early November. Due to the season-ending injury of star rusher Derrick Henry, Mike Vrabel needed the contribution of the 36-year-old who eventually saw action in three games.
NFL・5 DAYS AGO

The Packers announced just moments ago they’ve activated Rodgers off the reserve/COVID-19 list. Rodgers missed Green Bay’s Week 9 game against the Kansas City Chiefs. Jordan Love got the start in his place, but didn’t have much success in a 13-7 loss to Patrick Mahomes and company. Rodgers, the 2020-21...
NFL・15 DAYS AGO
The Spun

NBA superstar Steph Curry loved every second of Cam Newton‘s return for the Carolina Panthers on Sunday afternoon. Newton scored two touchdowns in goal-line scenarios, helping the Panthers beat the Arizona Cardinals 34-10. Curry wasn’t surprised at all. The Golden State Warriors point guard grew up in the city of...
NBA・14 DAYS AGO
ESPN

CHARLOTTE, N.C. --  Stephen Curry wasnt happy the Golden State Warriors lost in his home city of Charlotte to the Hornets on Sunday night. But the two-time NBA Most Valuable Player was pretty excited that earlier in the day NFL quarterback Cam Newton returned in a big way to help the Carolina Panthers beat the first-place Cardinals 34-10 in Arizona.
NBA・14 DAYS AGO
The Spun

Jerry Jones made his opinion on the officiating in Thursday afternoon’s Dallas Cowboys vs. Las Vegas Raiders game extremely clear. The Cowboys fell to the Raiders, 36-33, in overtime on Thursday. Dallas dropped to 7-4 on the season with the loss, while Las Vegas improved to 6-5. The game was...
NFL・3 DAYS AGO