Patrice Evra admits he is 'sick' of seeing Lionel Messi winning the Ballon d'Or and that there are more deserving candidates to win the award this year.

The Paris Saint-Germain forward is favourite to win the award again next month, having finally guided his Argentina side to success in the Copa America this summer for the first time in 28 years.

The 34-year-old is the current holder of the award from back in 2019 with last year's event cancelled due to the Covid-19 pandemic.

Despite an underwhelming final season with Barcelona last term before the expiry of his contract led to his summer switch to PSG, Messi could now be set for a seventh Ballon d'Or win having already collected a record six.

But Evra believes another Messi win would be an injustice and the Manchester United star has instead tipped Chelsea stars N'Golo Kante and Jorginho as better options to pick up the prestigious crown next month at the Theatre du Chatelet in Paris.

Both proved instrumental in the Blues surprise run to the Champions League final before the Blues then saw off Premier League champions Manchester City 1-0 under Thomas Tuchel, with Kante putting in a Man of the Match performance, while Jorginho also triumphed with Italy at Euro 2020.

'In my opinion this Ballon d'Or is for Kante or Jorginho... I'm sick of giving it to Messi,' Evra said.

'What did he win last year? Okay, the Copa America. With Barcelona what did he do?' 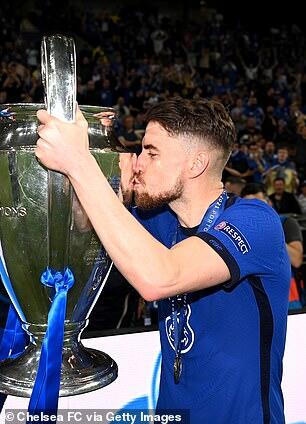 Although Barca faltered badly in LaLiga last term to finish third and exited the Champions League at in the last-16 Messi did at least guide his team to Copa del Rey success.

Having joined PSG as a result of Barca's financial difficulties in being unable to offer him a new deal, his new manager Mauricio Pochettino has tipped one of his latest recruits and compatriots to retain his award.

'The Ballon d'Or should go to Messi without any doubt, Pochettino said.

'And if I didn't coach Messi, I would still say Messi. I answer with my heart. I always say what I feel. On the podium with him would have to be (Robert) Lewandowski and Cristiano [Ronaldo].'

"It is unacceptable that the person responsible for awarding such a prestigious prize could lie in this way," Ronaldo said.
SOCCER・5 DAYS AGO
The Independent

The Ballon d’Or returns after a year absence and Lionel Messi is favourite to make history and win a record seventh prize. Last year’s award was cancelled due a football calendar disrupted by the pandemic – a controversial decision which saw Robert Lewandowski almost certainly denied his first golden ball.Bayern Munich’s Polish striker is among the frontrunners once again, but Messi’s achievement finally winning the Copa America earlier this year has put him top of the pile in this year’s odds. If Messi does win, it would be his seventh Ballon d’Or award, a record tally which would see him...
SOCCER・6 DAYS AGO
The Guardian

Divock Origi added another famous goal to his Liverpool portfolio, while Callum Wilson gave Newcastle their first league victory of the season
PREMIER LEAGUE・1 DAY AGO
The Independent

Chelsea duo N’Golo Kante and Jorginho will battle it out with Cristiano Ronaldo, Lionel Messi and Kylian Mbappe for The Best Fifa men’s player award for 2021.The Blues have also had no fewer than four players – Magdalena Eriksson, Pernille Harder, Ji So-yun and Sam Kerr – shortlisted for the women’s award, while men’s boss Thomas Tuchel and women’s counterpart Emma Hayes have been nominated for the coaching awards.France’s World Cup-winning midfielder Kante and Jorginho, a member of the Italy team which beat England in the Euro 2020 final, will compete with Ronaldo, Messi and Mbappe, as well as Manchester...
PREMIER LEAGUE・13 DAYS AGO

Heated debates: 12 of the most entertaining disagreements over football ever broadcast on TV

It’s a wonder that Sky Sports haven’t turned the studio into a full-blown wrestling ring. In the red corner, one former professional, snarling about mentality and bottle, while in the blue, someone else discusses the stats of the situation. And sure enough, the weekend sure yet another example, with Jamie...
TV & VIDEOS・6 DAYS AGO
Tribal Football

PSG superstar Lionel Messi has won a seventh Ballon D'Or award. The Argentine pipped out Bayern Munich superstar Robert Lewandowski. Messi endured one of his worst seasons domestically as Barcelona finished third and fell in the first knockout round of the Champions League. However, he was the top scorer in...
SOCCER・6 DAYS AGO
firstsportz.com

Lionel Messi won his seventh Ballon d’Or title, at the gala event hosted yesterday at the Théâtre du Châtelet, in Paris. The record-breaking golden ball award, for Messi however did not sit right with many footballers and coaches after the event, who had felt that others were more deserving to win the award this year instead of the Argentine superstar.
PREMIER LEAGUE・5 DAYS AGO
firstsportz.com

Real Madrid midfielder, Toni Kroos became one of the first footballers to criticize the Ballon d’Or results, after France Football awarded it to Lionel Messi for the year 2021, yesterday in Paris. Messi won his 7th Ballon d’Or title coming on the back of an excellent year for both club and country, yet it wasn’t enough to satisfy many former and current footballers, who were of the opinion that there were others who were more deserving than Messi this year.
SOCCER・5 DAYS AGO

Barcelona boss Xavi insists Lionel Messi DID deserve to win the Ballon d'Or ahead of Robert Lewandowski and Jorginho, as he describes the Argentine's record-extending victory as 'total justice'

Manchester United's soon-to-be new manager once called Cristiano Ronaldo "too old and too expensive." Ralf Rangnick made the comment when asked if he would sign Ronaldo for RB Leipzig in 2016. It is a worrying sign for the Portuguese forward's future at Old Trafford. Manchester United's soon-to-be new manager Ralf...
PREMIER LEAGUE・8 DAYS AGO
The Independent

If you are already bored of the interminable debate over whether Cristiano Ronaldo is a help or a hindrance to Manchester United, bad news, this is just the beginning. It is not going away any time soon, partly because he is not going away any time soon either. Just as Old Trafford prepares to enter the gegenpressing era and even more attention is paid to what he does off the ball, he keeps winning matches with what he does on it.That might ignore some of the particular nuances in the arguments over Ronaldo’s role in this team, on both sides...
PREMIER LEAGUE・2 DAYS AGO

An Egyptian football manager has died at the age of 53 after suffering a heart attack while celebrating his team's stoppage-time winner. Adham El-Selhadar's El Magd side netted a goal in the second minute of added on time in their 1-0 victory against El Zarqa in an Egyptian Second League match on Thursday.
SOCCER・21 HOURS AGO
fourfourtwo.com

Cristiano Ronaldo would like to see Luis Enrique take over as Manchester United manager, according to reports. The Red Devils are on the lookout for a new head coach after sacking Ole Gunnar Solskjaer on Sunday. The Norwegian was dismissed following his team's 4-1 defeat by Watford on Saturday. Michael...
PREMIER LEAGUE・14 DAYS AGO
The Guardian

Who took over? Who walked away? Who kept going?
TENNIS・2 DAYS AGO
Daily Mail

David Beckham is under yet more pressure over his multi-million pound deal to promote the 2022 World Cup after homosexuality was described as being ‘against human nature’ on a Qatari TV channel run by a close friend. Football pundit Mohamed Aboutrika, a former Egypt international, launched the offensive tirade on...
PREMIER LEAGUE・18 HOURS AGO
The Independent

Champions Manchester City are almost back to full strength as they travel to Watford in the Premier League on Saturday.Manager Pep Guardiola claimed his squad were facing an “emergency” ahead of their midweek win at Aston Villa as they were hit by injury, illness and suspension problems.That emergency now seems to be over with playmaker Kevin De Bruyne heading a host of players that could return at Vicarage Road.The Belgium international has been sidelined with coronavirus but is now back in training while Ilkay Gundogan, John Stones and Kyle Walker – all absent on Wednesday with knocks – are back...
PREMIER LEAGUE・2 DAYS AGO
San Diego Union-Tribune

Union Berlin has defeated Leipzig 2-1 to climb to fourth in the Bundesliga and deepen the visitor's crisis
SAN DIEGO, CA・1 DAY AGO
San Diego Union-Tribune

Son Heung-min's goal at the end of a sweeping counterattack sealed Tottenham's 2-0 win over Brentford to leave Antonio Conte unbeaten in three Premier League games in charge of the London team
SAN DIEGO, CA・2 DAYS AGO
The Guardian