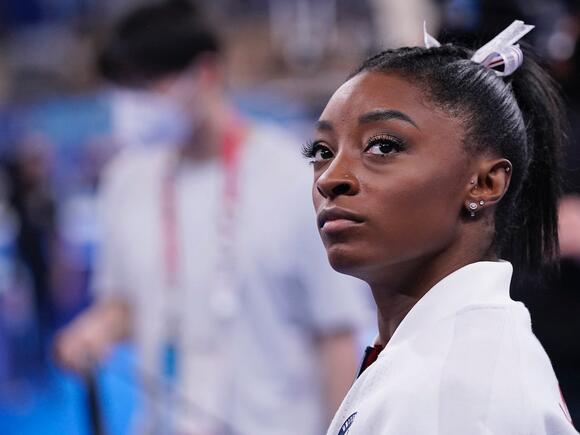 Simone Biles, 24, recently shared that she has come a long way in prioritizing her mental health.

The seven-time Olympic medalist reflected on her personal growth on Friday during an "Ask Me Anything" Q & A with her followers on Instagram Stories.

One follower asked, "What Olympic moment has marked you the most in your career?"

"2021. having the courage to take care & put myself first," Biles replied in the screenshot captured by Insider below. In smaller type she added, "16 yr old simone would never."

While competing in the Tokyo Olympics, Biles pulled out of four event finals due to experiencing the "twisties," a performance issue that can cause discombobulation in the air, possibly resulting in severe injury or worse.

The decorated athlete recently told The Cut that it was likely a conflation of emotional stress and past trauma that led to her performance faltering. "If you looked at everything I've gone through for the past seven years, I should have never made another Olympic team," she said.

"Say up until you're 30 years old, you have your complete eyesight," Biles continued. "One morning, you wake up, you can't see s--t, but people tell you to go on and do your daily job as if you still have your eyesight."

"You'd be lost, wouldn't you?" she added. "That's the only thing I can relate it to. I have been doing gymnastics for 18 years. I woke up - lost it. How am I supposed to go on with my day?"

However, Biles' decision to withdraw from competition became a hotly debated topic in the media. In an op-ed article for the Daily Mail , Piers Morgan criticized the gymnast where he claimed she "let down" her country and her teammates.

In a September 2021 interview with Harper's Bazaar Biles shared that she is continuing therapy amid the fallout from the Tokyo Olympics. "This will probably be something I work through for 20 years. No matter how much I try to forget. It's a work in progress," she said.

Despite the intense level of public scrutiny over her personal choices, Biles said she does not regret anything, telling the Associated Press that "everything happens for a reason."

"Everybody asks, 'If you could go back, would you?' No. I wouldn't change anything because everything happens for a reason. And I learned a lot about myself-courage, resilience, how to say no and speak up for yourself," she said.

Dec. 1 (UPI) -- People Magazine named Dolly Parton, Sandra Oh, Simone Biles and National Teacher of the Year Juliana Urtubey -- along with all of America's Teachers -- its 2021 honorees. People reported that each individual did their part to make the world a better place during a "transformative...
CELEBRITIES・5 DAYS AGO
weisradio.com

Simone Biles named one of the People of the Year, ‘White Men Can’t Jump’ remake, and more

Record breaking gymnast Simone Biles is one of the People of the Year! The seven-time Olympic medal winner joins Dolly Parton, Sandra Oh from Grey’s Anatomy, and National Teacher of the Year Juliana Urtubey, on the list of People Magazine’s 2021 People Of the Year. At the 2020 Summer Olympic...
SPORTS・5 DAYS AGO
People

On Thursday, the 24-year-old Olympic gymnast posted footage to her Instagram Story of a tropical getaway, without disclosing exactly where she was. As seen on her Story, Biles shared a snap of a palm tree-lined pool, a video of her and a friend taking a shot in swimsuits, and an image of a plate full of turkey day fare, which she captioned "happy thanksgiving."
CELEBRITIES・10 DAYS AGO
Click2Houston.com

HOUSTON – At the end of a tumultuous 2021, Houston’s own Simone Biles has claimed the cover of People magazine as one of the People of the Year. People wrote of Biles, “As 2021 comes to an end, Simone Biles isn’t dwelling on the year that could have been: ‘I fought hard. I survived.’ 🙏 The superstar Olympic gymnast — one of PEOPLE’s 2021 People of the Year — became a champion for mental health as she grappled with the intense pressure of competing on the Olympic stage this past summer in Tokyo. ‘That’s probably one of the first times in my career where I felt courageous and I felt like I had got to speak up for myself,’ she reflects now. ‘[I] definitely can walk away from Tokyo, feeling courage, feeling at ease. And I did everything I could.’”
HOUSTON, TX・5 DAYS AGO

Simone Biles named one of 'People of the Year' for 2021: A champion for mental health

Seven-time Olympic artistic gymnastics medallist Simone Biles has been named one of PEOPLE magazine's 'People of the Year' for 2021. The magazine also honoured country music icon Dolly Parton, Sandra Oh and U.S. educators. The gymnastics superstar was praised by the magazine for becoming "a champion for mental health as...
GYMNASTICS・5 DAYS AGO
papercitymag.com

Clayton Katz showered with confetti as he jukes down the catwalk during the Una Notte Italia men's fashion fundraiser. (Photo by Daniel Ortiz) Serious sports fans couldn’t help but be gob smacked at the Una Notte in Italia gala benefiting Children at Risk. Although not walking the fashion runway with fellow sports greats, Olympian Simone Biles was certainly one of the stars of the night on the arm of her beau former Houston Texan Jonathan Owens, who did make the fashion parade. And there was another hometown Olympian favorite Carl Lewis.
HOUSTON, TX・13 DAYS AGO
WFAA

Simone Biles among honorees for 2021 People of the Year

Simone Biles is adding another accomplishment to her list: becoming an honoree for People Magazine’s ‘People of the Year.’. The Olympian was named alongside actress Sandra Oh, singer Dolly Parton and multiple U.S. teachers. People Magazine honored Biles for her withdrawal from some competitions during the Tokyo Olympics this summer....
CELEBRITIES・5 DAYS AGO
NBC Sports

Katie Ledecky is entered in her first swim meet since the Tokyo Olympics, the U.S. Open, airing on Olympic Channel and NBC Sports this week. Competition starts Wednesday with the men’s and women’s 800m freestyles (Ledecky’s trademark event). USASwimming.org airs those finals at 6 p.m. ET, plus the first full night of finals Thursday at 7.
SWIMMING & SURFING・6 DAYS AGO

On the opening night of the 2021 U.S. Open at Greensboro Aquatic Center, 10-time Olympic swimming medalist Katie Ledecky made a statement in her most dominant event. Competing in her first meet since the Tokyo Games, Ledecky won the women’s 800m, finishing nearly 11 seconds ahead of two-time Olympic medalist Leah Smith.
SWIMMING & SURFING・4 DAYS AGO
olympics.com

As the end of 2021 nears, seven-time Olympic artistic gymnastics medallist Simone Biles is looking back at the year that had her decision to priortise her mental health making global headlines. "That's probably one of the first times in my career where I felt courageous and I felt like I...
GYMNASTICS・3 DAYS AGO
uticaphoenix.net

Rihanna was also shining bright on Monday when Barbadian Prime Minister Mia Mottley honored the native of Barbados as a national hero. “On behalf of a grateful nation, but an even prouder people, we therefore present to you the designee for national hero of Barbados, Ambassador Robyn Rihanna Fenty,” Mottley said, as Blavity previously reported. “May you continue to shine like a diamond and bring honor to your nation by your works, by your actions and to do credit where you shall go. God bless you, my dear.”
CELEBRITIES・1 DAY AGO
Insider

Novak Djokovic will get vaccinated because he won't want to risk missing his first chance to become the GOAT, Australian Open boss says

Novak Djokovic will get a COVID vaccine because he won't want to miss the chance to win a 21st Grand Slam. That's the view of Australian Open boss Craig Tiley, who reiterated that unvaxxed players will be barred. Djokovic has repeatedly refused to reveal his vaccination status. Craig Tiley, the...
TENNIS・11 DAYS AGO

The 2022 calendar year is approaching quickly, as only a couple of weeks remain in 2021. The 2022 Sports Illustrated Swimsuit issue will be here before you know it. Over the years, several notable athletes have posed for the issue. Among them: Alex Morgan. The United States women’s national team...
SOCCER・1 DAY AGO
firstsportz.com

‘He lit up every room he walked into,’ Serena Williams shares a heartfelt video for late friend Virgil Abloh

At the age of 41, renowned fashion designer Virgil Abloh passed on Sunday after battling a rare form of cancer. Abloh was one of the most prominent figures in the fashion industry was known for his creative mind. He bought a new thinking in fashion which had no limits and guided modern fashion to a new dimension altogether. Needless to say, the world is mourning the passion away of such a legendary figure.
TENNIS・6 DAYS AGO
Hello Magazine

Serena Williams loves featuring her daughter Olympia in her social media posts, and fans couldn't help but "aww" over her latest one. The tennis star shared a post on her Instagram featuring the mother and daughter pair as they donned some fall-appropriate attire. The two wore matching orange dresses that...
TENNIS・8 DAYS AGO
olympics.com

Sofia Goggia exclusive: "My daring skiing is like a piano sonata"

Olympic downhill champion Sofia Goggia is ready for the first two World Cup downhill events of the new season that will be held in Lake Louise, Canada, from 3-4 December. Goggia, 29, is coming off an impressive season that saw her win four downhill races en route to winning her second World Cup. With 32 podium finishes and 11 wins, the native of Bergamo is now within range of matching Isolde Kostner, the most successful Italian downhill skier in World Cup history (Kostner achieved 51 podium finishes and 15 race wins in her career).
SPORTS・4 DAYS AGO
Get Up Mornings with Erica Campbell

The dynamic fashion duo are always twinning, and we love it!
TENNIS・7 DAYS AGO
AFP

Novak Djokovic ended his rollercoaster season with a Davis Cup defeat on Friday and then promised to make a decision on his Australian Open participation "very soon". The world number one, who captured three of the season's four Grand Slams in 2021 to take him level with Roger Federer and Rafael Nadal on 20, is still a doubt for January's Australian Open after organisers insisted only fully-vaccinated players will be allowed into the country. The 34-year-old has refused to say whether or not he has been vaccinated against coronavirus. "I understand you want answers on where and how I am going to start the new season, but we'll see what the future holds," said Djokovic, a record nine-time champion in Melbourne.
TENNIS・2 DAYS AGO
AFP

International Tennis Federation president David Haggerty said Sunday that his organisation will not boycott China over the Peng Shuai affair as "we don't want to punish a billion people". The WTA, which controls the women's game, last week suspended all tournaments in China amid what its chairman called "serious doubts" about the safety of Chinese player Peng, who accused a top Communist Party leader of sexual assault. WTA chair and CEO Steve Simon said the move -- which could cost the WTA hundreds of millions of dollars -- had the "full support" of the tour's board of directors. However, the ATP, which governs men's tennis, has refused to follow the WTA's example.
TENNIS・22 HOURS AGO
USA TODAY

Kaillie Humphries won bobsled gold at 2010 and 2014 Olympics, as well as a bronze at 2018 Games, while representing Canada, where she was born.
SPORTS・3 HOURS AGO