Jurgen Klopp has unleashed a furious rant at broadcasters who decided Liverpool's game against Watford would kick off at lunchtime.

The Reds kicked off at 12.30pm British time against the Hornets in the Premier League at Vicarage Road on Saturday afternoon, in new boss Claudio Ranieri's first match.

Liverpool's Brazilian stars Alisson and Fabinho were unable to play in the match, having just completed international duty with Brazil.

He told journalist Des Kelly on BT Sport before the match: 'Because we play at 12.30pm there was no chance that they'd play and that's why we thought then to send them (to Spain).

'If we would have played tonight they would be here and we would have given it a try, but we play at 12.30pm and there was no chance. I think it was the broadcaster's (BT) idea to have us at 12.30pm, was it Watford? 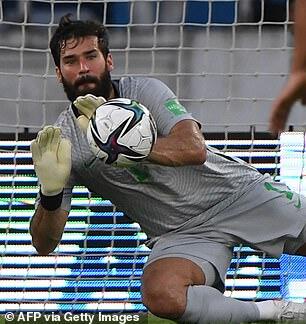 Therefore, with little prospect of making the match the club decided to send them directly to Madrid for their Champions League match on Tuesday.

In Friday's press conference, Klopp fumed: 'Somebody decided to give Brazil the opportunity to play last night. And then somebody made the decision for us to play on Saturday at 12.30. It's not in our hands.'

The former Borussia Dortmund boss has history with Kelly, having accused him and BT of causing an injury to James Milner in an extraordinary rant last year.

After drawing against Brighton, Klopp argued with Kelly across an eight-minute post-match interview, holding the broadcaster responsible for his players' struggles with injuries due to numerous fixtures back-to-back.

He said: 'I don't know how often I have to say it, but you pick the 12.30 kick-offs. Between now and December there is one more Wednesday, Saturday. These are difficult times. I am just saying it how it is. Wednesday to Saturday 12.30 is really dangerous.'

Liverpool manager Jurgen Klopp called the 4-0 demolition of Arsenal “an impressive result” as his side returned to winning ways. Last time out before the international break the Reds lost their 26-game unbeaten run with defeat at West Ham but bounced back in some style by clinically taking apart the Gunners as their 10-match streak without defeat ended.
PREMIER LEAGUE・8 DAYS AGO
LFCTransferRoom

After news emerged on Sunday morning that Jordan Henderson was being sent back to Liverpool after picking up an injury whilst on England duty, fans have responded by taking to social media and are clearly not happy. As to what the injury is remains unclear but it's not the first...
SOCCER・14 DAYS AGO
LFCTransferRoom

A former referee has been giving his thoughts about the decision not to send off Aaron Cresswell in Liverpool's defeat to West Ham earlier this month and Jurgen Klopp's comments at the time. Liverpool manager Klopp was clearly frustrated by the officials for a number of decisions as his team...
LIVERPOOL, NY・11 DAYS AGO
Yardbarker

Since taking over as Liverpool boss in October of 2015, Klopp has won the Premier League (2019-20), made it to the UEFA Champions League Finals twice and winning it once (2018-19), UEFA Super Cup, and FIFA Club World Cup (2019). This impressive list of honours has Liverpool supporters desperate for...
UEFA・11 DAYS AGO

Bayern Munich star man Robert Lewandowski has described Jurgen Klopp as a 'father figure' to him. The Polish striker spent four years playing for Klopp at Borussia Dortmund, they won the Bundesliga twice in this time. As well as a German Cup and German Super Cup, before Lewandowski's departure to Bayern Munich in 2014.
PREMIER LEAGUE・11 DAYS AGO
BBC

Liverpool manager Jurgen Klopp says he is "really happy" with Liverpool's "mature" performance as they beat Arsenal 4-0 at Anfield, while also setting straight the heated words he had with Arsenal manager Mikel Arteta during the game. MATCH REPORT: Liverpool 4-0 Arsenal. Watch highlights of all of Saturday's Premier League...
PREMIER LEAGUE・8 DAYS AGO
Yardbarker

According to research conducted by The Athletic, Liverpool have a number of exciting talents who are yet to enter their peak years of football – the most prominent of which being Diogo Jota, Joe Gomez and Trent Alexander-Arnold. In a tweet sharing Caoimhe O’Neill and Mark Carey’s article for the...
PREMIER LEAGUE・10 DAYS AGO
Yardbarker

According to reports, Porto mamager Sérgio Conceição has asked striker Luis Diaz to stay at the club for the rest of the season as Liverpool and Manchester United lurk. Last week, it was reported that Luis Diaz is setnl to join Jurgen Klopp's men in January with Mohamed Salah and Sadio Mane both going to AFCON.
PREMIER LEAGUE・12 DAYS AGO

What is heavy metal football & how has Jurgen Klopp used it at Liverpool?

The German coach is as synonymous with his intense, fast-paced football as he is with his excessive goal celebrations. But what is behind his tactics?. Liverpool manager Jurgen Klopp is known for his 'heavy metal football', but that doesn't mean that he soundtracks his training sessions with the AC/DC and Metallica discographies.
PREMIER LEAGUE・13 DAYS AGO
LFCTransferRoom

Fans of Brazil have taken to social media to praise Liverpool midfielder Fabinho for his dominant performance in his country's 0-0 draw with Argentina in Buenos Aires on Tuesday. The 28 year old only played the last few minutes of the encounter against Colombia in which Brazil ran out 1-0...
PREMIER LEAGUE・11 DAYS AGO
LFCTransferRoom

In the final game of the November international break for Liverpool's players, Alisson and Fabinho started for Brazil as they faced off against Argentina in Buenos Aires. Both teams have already qualified for next year's World Cup and played out a 0-0 draw. After Alisson's uncharacteristic performance in Liverpool's 3-2...
PREMIER LEAGUE・11 DAYS AGO
ClutchPoints

Liverpool manager Jurgen Klopp drops a truth bomb on dealing with the international break. This was quite a harsh take from Klopp; fans worldwide seek international breaks because of the desire to support their respective national teams. Countless players also relish the unique opportunities to represent their country, which can serve as a way for football players to have some time away from existing turbulence at their clubs.
PREMIER LEAGUE・9 DAYS AGO

Liverpool manager Jurgen Klopp has praised Wales defender Neco Williams for his performances in Wales' World Cup qualifiers against Belarus and Belgium. Williams scored his second goal for Wales in their 5-1 win over Belarus and almost grabbed a late win for Wales against Belgium. The 20-year-old has made only...
PREMIER LEAGUE・9 DAYS AGO
Sporting News

Jurgen Klopp has reacted to Liverpool legend Steven Gerrard's return to the Premier League by declaring that he will now "watch Aston Villa games a bit closer." Gerrard opted to leave Rangers after 3 1/2 years at the helm to take up the top job at Aston Villa last week.
PREMIER LEAGUE・10 DAYS AGO
Daily Mail

Graeme Souness believes Jurgen Klopp's Liverpool will be an 'angry team' against Arsenal this weekend after the Reds lost their first game of the season last time out at West Ham. Klopp's side were beaten 3-2 by the high-flying Hammers in their last top-flight outing to fall four points behind...
PREMIER LEAGUE・10 DAYS AGO
SkySports

Jurgen Klopp believes Steven Gerrard has had the "perfect" coaching career so far, one that can help him become a potential Liverpool manager one day. Former Liverpool captain Gerrard was confirmed as the new manager at Aston Villa this week having enjoyed a successful spell at Rangers. Having retired from...
PREMIER LEAGUE・9 DAYS AGO
The Independent

Liverpool manager Jurgen Klopp insists his time at the club is “far from being over” but is in no mood to discuss his long-term future.At his first press conference as Aston Villa boss this week former Reds captain Steven Gerrard – who has been touted as Klopp’s successor – said he would be delighted if the German signed a deal for life at Anfield.Klopp’s current contract runs until 2024, at which point he will have been at the club for nine years – his longest stay anywhere – and that fact is enough for him.“I saw Stevie say a lot...
PREMIER LEAGUE・9 DAYS AGO
The Independent

Liverpool manager Jurgen Klopp is confident there will be a smooth transition when Michael Edwards hands over sporting director duties to Julian Ward in the summer.Klopp believes the role is invaluable in allowing him to focus on team issues and welcomes the continuity which will see the club promote from within.“He’s worked very closely with Michael Edwards in the past so I don’t think there will be any kind of ‘rough sea’ things to overcome. I think it will be a very smooth takeover,” said the Reds boss.“If I would have come here 10 years ago and told you a...
PREMIER LEAGUE・8 DAYS AGO
Yardbarker

"It was about the situation that it was no foul from Sadio [Mane] but the Arsenal bench went up like it was a red card. I asked what they want in that situation." Jurgen Klopp brought up how he had to take off Sadio Mane in the Champions League match against Atletico Madrid.
PREMIER LEAGUE・8 DAYS AGO
LFCTransferRoom

Ahead of the Liverpool v Arsenal Premier League match on Saturday, Jurgen Klopp has been speaking to the press. The Reds manager gave his thoughts on international breaks. It was quite clear that the German is not a fan of losing his players when they go off to join up with their national teams.
PREMIER LEAGUE・9 DAYS AGO