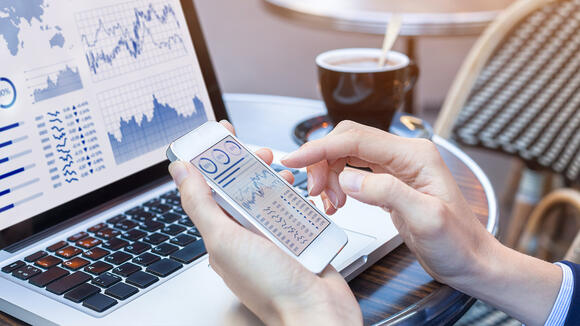 Earnings pushed markets higher yet again to close out the week with an especially strong performance from the Dow Jones. ARK Funds tracked similarly with the major averages with one big exception. ARKF performed the best out of the group, up 1.0%, while ARKG did the worst, down 0.5% on the day. The gains from past year are slowly sliding away, but Cathie Wood may have something up her sleeve as she is constantly reshuffling her ETFs to stand up to market headwinds.

ARK Invest has been the talk of Wall Street over the past couple of years, outperforming the market and solidifying its place among the big players in the investments world. Wood is the founder and head of this investment house, and many have compared her rising star to the likes of Warren Buffett.

Many traders are looking to mirror the plays of famous investors and huge brokerage firms to capitalize on the gains that the big dogs are making. Lucky for us, ARK Invest releases a list of its trades at the end of each trading day.

While some companies would require a subscription service or monetary fee to see what makes ARK Invest tick, here at 24/7 Wall St. we would rather give you the data for free. Here is a quick look at some of the major trades that ARK Invest executed on October 15, 2021.

The ARK Fintech Innovation ETF ( NYSEARCA: ARKF ) deals mainly with up-and-coming fintech stocks, as the name suggests. Some of its biggest holdings include Square, Zillow, Pinterest, PayPal and Alibaba. Net assets for the fund are currently $4.0 billion. Here are a few notable trades in this fund: NO TRADES

ARK Genomic Revolution ETF ( NYSEARCA: ARKG ) looks at companies across multiple industries, but the general focus is on health care and companies that are changing the game technologically in this field. The biggest holdings are Pacific Biosciences, Teladoc Health, CRISPR and Fate Therapeutics. Net assets for the fund are currently $9.7 billion. Here are some notable trades in this fund: Sell 153,997 Nanostring, Buy 82,166 shares of Quantum-Si, & 256,920 shares of Somalogic.

ARK Innovation ETF ( NYSEARCA: ARKK ) has a particular focus on disruptive innovation across multiple industries, but primarily tech. Some of the biggest names are in this fund, including Tesla, Roku, Square, Zillow and Spotify. Net assets for this fund are currently $25.5 billion. Here are some notable trades in this fund: Buy 48,448 shares of Teladoc & 65,996 shares of Intellia Therapeutics.

ARK Autonomous Technology & Robotics ETF ( NYSEARCA: ARKQ ) is focused, unsurprisingly, on companies that are in the field of autonomous technology and robotics, specifically ones that are disruptively innovating. Big names in this fund include Tesla, Alphabet, JD.com, Baidu and Iridium. Net assets for this fund are currently $3.1 billion. Here are a few trades of note in this fund: Buy 229,411 shares of Blade Air Mobility, Buy 34,575 shares of 2U, & Buy 126,360 shares of Velo3d.

ARK Next Generation Internet ETF ( NYSEARCA: ARKW ) is focused on companies that are disruptively innovating within the theme of the next generation of the internet. Some names in this fund are similar to the others, including Tesla, Square, Grayscale Bitcoin Trust, Facebook and Snap. Net assets for this fund are currently $6.4 billion. Here are a few notable trades in this fund: NO TRADES

Ark Space Exploration & Innovation ETF ( NYSEARCA: ARKX ) is focused primarily on companies developing technology around spaceflight. Big names in this fund include Trimble, Kratos, Nvidia, Amazon and Iridium. Net assets for this fund are currently $63.3 million. The one trade worth noting in this fund: Buy 43,712 shares of Markforged.

Check out all the trades here:

Catherine Wood, the CEO and CIO of ARK Investment Management, is a minority and nonvoting shareholder of 24/7 Wall St., owner of 247wallst.com.

Volatility has been the name of the game lately in the stock market. Thanks to the rise of the new COVID-19 variant omicron, inflation, and the threat that the Federal Reserve may start raising interest rates, anxiety has gripped many investors. Can a market crash be coming soon?. No one...
STOCKS・22 HOURS AGO
The Motley Fool

And it wouldn't have taken very long to make a boatload of money.
STOCKS・22 HOURS AGO
The Motley Fool

As inflation continues to bite, ride the wave into the new year with these three stocks.
STOCKS・21 HOURS AGO
The Motley Fool

These two stocks could become huge winners if they're held for the long term.
STOCKS・22 HOURS AGO

3 Hot Metaverse Stocks to Buy Before 2021 Is Over

Looking to benefit from the rise of the metaverse? These stocks are top plays.
STOCKS・21 HOURS AGO
The Motley Fool

Bargains aren't bargains if there's not much hope for a strong rebound move.
STOCKS・21 HOURS AGO
Benzinga

Cathie Wood Sells More Shares In Tesla And Buys The Crash In DocuSign On Friday; Here Are Other Key Trades

Roku -58% In all, Wood’s flagship Ark Innovation ETF has dropped 25% for the year, compared to the S&P’s 21% gain. The backstory: Wood, the CEO of Ark Invest, became a hero to many individual investors last year for her bets on disruptive tech companies in areas like artificial intelligence, blockchain, and robotics. Her Innovation ETF surged 149% in 2020, when much of life moved online.
STOCKS・10 HOURS AGO

The cryptocurrency trading company's stock has plummeted after its initial post-SPAC merger pop.
STOCKS・14 HOURS AGO
The Motley Fool

What Is This "Market" That Stock Pickers Keep Trying to Beat?

Can individual investors beat the S&P 500? Motley Fool CAPS is a great way to find out!
STOCKS・23 HOURS AGO
The Motley Fool

You Can Retire a Millionaire on This 1 Investment

The best part? It doesn't require much research at all.
ECONOMY・1 DAY AGO
Benzinga

Some of the stocks that may grab investor focus today are:. Wall Street expects Science Applications International Corporation (NYSE: SAIC) to report quarterly earnings at $1.50 per share on revenue of $1.88 billion before the opening bell. Science Applications International shares rose 0.3% to close at $85.56 on Friday. Alibaba...
STOCKS・37 MINUTES AGO

These two companies are highly popular on the polarizing trading app -- and with good reason.
STOCKS・1 DAY AGO
24/7 Wall St.

These are five stocks for aggressive investors looking to get share count leverage on companies that have sizable upside potential. While not suited for all investors, they are not penny stocks with absolutely no track record or liquidity, and Wall Street firms do have research coverage.
STOCKS・1 DAY AGO
The Motley Fool

When Elon Musk says jump, most say "how high"-but now's the time to be critical.
STOCKS・1 DAY AGO
Benzinga

Shares of San Francisco-based DocuSign, Inc. (NASDAQ:DOCU), a SaaS provider of digital signatures and approvals, tanked over 40% Friday following the release of its quarterly results. What Happened: Undeterred by the steep sell-off, Cathie Wood's Ark Invest bulked up on DocuSign, using the weakness as a buying opportunity. Wood's ARK...
STOCKS・1 DAY AGO
The Motley Fool

New to the Stock Market? 3 Investments You Can't Go Wrong With.

Start with reliable names that you know aren't going to throw you any curveballs.
STOCKS・1 DAY AGO
The Motley Fool

3 Incredible Value Stocks to Buy Before 2021 Is Over

Aspiring Millionaire Investor? This Is a Better Bet Than Shiba Inu

The meme-based cryptocurrency may not be your best path to riches.
STOCKS・1 DAY AGO