McCaffrey is placed on IR, will miss at least 3 more games, Panthers say 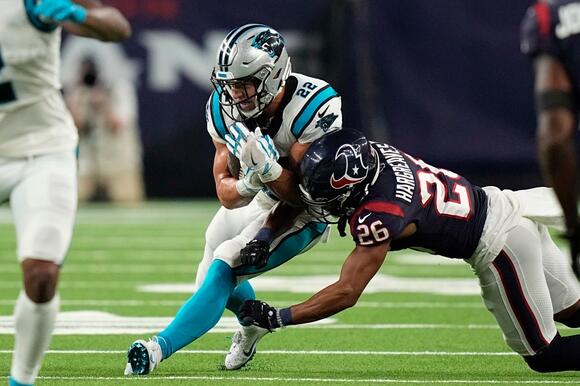 CHARLOTTE, NC (FOX 46 CHARLOTTE) – Injury woes continue to hamper the career of Panthers Pro Bowl running back Christian McCaffrey, who was placed on injured reserve Saturday with a nagging hamstring injury, meaning he’ll be out for at least three more games, the Carolina Panthers have announced.

CMC will miss his third straight game Sunday against the Minnesota Vikings because of the injury.

McCaffrey was held out of practice for a second consecutive day Friday.

“We came off the field that day hoping that he would be ready on Thursday, but he just hasn’t been there yet,” Rhule said. “He’s doing everything he can. It’s been three weeks. So we hope to have him out there (at practice) next week.”

Rookie Chuba Hubbard, who rushed for 104 yards last week in a loss to Philadelphia, is expected to start, with Royce Freeman getting some work as a backup.

What’s happening? Sign up here for FOX 46 Alerts and get Breaking News sent straight to your inbox

For the latest news, weather, sports, and streaming video, head to FOX 46 Charlotte.

Despite leading the Carolina Panthers to a victory last Sunday, P.J. Walker will not start this Sunday against the Washington Football Team. Instead, Panthers coach Matt Rhule is handing the keys to his offense over to Cam Newton. That’s right, Newton will make his first start for the Panthers since...
NFL・16 DAYS AGO
CharlotteObserver.com

Analysis: Joe Brady’s future with the Carolina Panthers should be questioned

The Panthers’ honeymoon phase with Cam Newton ended a while ago. Feel-good homecomings and reminders of their young roster won’t shake this harsh reality. Carolina entered Sunday in need of leadership, explosive plays and a victory, yet left Hard Rock Stadium in defeat behind an uninspiring offensive performance filled with costly turnovers, defensive mishaps and another quarterback benching.
NFL・7 DAYS AGO
The Spun

The Carolina Panthers have reportedly parted ways with offensive coordinator Joe Brady. The former LSU Tigers offensive coordinator was in his second season leading the Panthers’ offense. Carolina has struggled mightily this season, especially at the quarterback position. Sam Darnold was inconsistent at best and neither P.J. Walker nor Cam...
NFL・13 HOURS AGO
bleachernation.com

Joe Brady parlayed turning Joe Burrow, Justin Jefferson, Clyde Edwards-Helaire, and others into college football’s version of The Greatest Show on Turf into an offensive coordinator’s gig with the Carolina Panthers. And after hot starts in each of the first two seasons, Brady’s name was thrown into a bunch of...
NFL・13 HOURS AGO

Panthers star running back Christian McCaffrey is heading back to injured reserve, the team announced Monday. He’ll miss the remainder of the year. McCaffrey suffered an ankle injury in the …. Sign up to keep reading — IT'S FREE!. In an effort to improve our website and enhance our local...
NFL・7 DAYS AGO
Denver Post

The Miami Dolphins have called up two young defensive backs from the practice squad ahead of Sunday’s home game against the Carolina Panthers to address injuries that could water down the special teams unit. Cornerback Elijah Campbell was placed on injured reserve Saturday because of knee and toe injuries. Jamal...
NFL・8 DAYS AGO
The Spun

McCaffrey went down with an ankle injury during the Panthers’ loss to the Dolphins on Sunday afternoon. The ankle injury will keep him out of the remainder of this season. “An ankle injury suffered in Sunday’s loss at Miami will cost Panthers running back Christian McCaffrey the rest of the season,” the team announced.
NFL・6 DAYS AGO
theScore

McCaffrey done for season after being placed on IR again

Carolina Panthers running back Christian McCaffrey will miss the rest of the 2021 season after being placed on injured reserve for a second time due to an ankle injury, the team announced Monday. McCaffrey was spotted in a walking boot after Sunday's loss to the Miami Dolphins and a subsequent...
NFL・6 DAYS AGO

The Carolina Panthers announced they have placed CB Donte Jackson on injured reserve with a groin injury. They filled the roster spot by activating sixth-round G Deonte Brown from injured reserve. Jackson, 26, was selected with the No. 55 overall pick by the Panthers out of LSU in 2018. He’s...
NFL・5 DAYS AGO
Stanford Daily

Stanford in the NFL Week 12: Schultz feasts on Thanksgiving, McCaffrey back to IR

When the Cowboys and Panthers faced off during Week 4 of the NFL season, tight end Dalton Schultz ’18 found himself in the end zone while Christian McCaffrey ’17 missed his first game of the season due to a hamstring injury. In Week 12, the two Stanford alumni encountered similar situations in their respective games, with Schultz returning to the end zone and McCaffrey again on the injured reserve.
NFL・5 DAYS AGO
USA TODAY Sports Media Group

Should Panthers, Christian McCaffrey consider a move to WR?

There are two discernible paths the Carolina Panthers can try to walk down with running back Christian McCaffrey. Both, however, may just be exercises in futility. So, let’s pave a third . . . On Monday, the team officially halted their star rusher’s season upon sending him back to the...
NFL・3 DAYS AGO
CBS 17

What will the Panthers get with RB Chuba Hubbard for the rest of 2021 after McCaffrey’s second IR stint?

Chuba Hubbard filled in for Christian McCaffrey in his five-game absence due to a hamstring and topped 60 yards in three of them, including more than 100 in week five.
NFL・4 DAYS AGO

Panthers Have Released An Official Statement On Joe Brady

The Carolina Panthers stunned the NFL this morning by parting ways with offensive coordinator Joe Brady. His tenure with the team ends after just 1.5 seasons. In a statement released by the team, Panthers head coach Matt Rhule said that he met with Brady and informed him of the change. He thanked Brady for his work in his time with the team.
NFL・13 HOURS AGO
USA TODAY

Joe Brady was hired to the Carolina Panthers with a lot of fanfare. He lasted one-and-a-half seasons after the team announced his firing Sunday.
NFL・13 HOURS AGO
Sportsnaut

The NFL injury report is always filled with some of the game’s best stars, leaving fans and fantasy football managers
NFL・15 HOURS AGO
The Spun

Legendary NFL running back Adrian Peterson reportedly could have retired and rode off into the sunset – and onto a notable TV show – at the start of the 2021 season. NFL.com reports that Peterson, who recently signed with the Tennessee Titans, had an offer to appear on a notable TV show.
NFL・28 DAYS AGO
featureweekly.com

The Dallas Cowboys will be missing wide receiver Amari Cooper for at least two of their three games in a 12-day span, beginning Sunday against the Kansas City Chiefs. Cooper was placed on the reserve/COVID-19 list on Friday. Cooper tested positive for COVID-19 and is unvaccinated, according to ESPN, which...
NFL・15 DAYS AGO
The Spun

Buccaneers quarterback Tom Brady has beaten every team in the NFL throughout his career but there’s one team that he loves to win against more than any other. It should come as no one’s surprise that it’s the New York Giants. Brady lost to New York twice in the Super Bowl while he was with New England, one of which came in 2008 when his team was vying for a perfect season.
NFL・13 DAYS AGO