Korean War hero, missing in action since 1950, laid to rest in RI 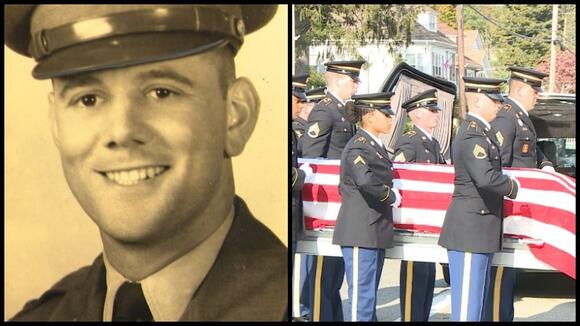 JOHNSTON, R.I. (WPRI) — A local soldier, whose remains were returned to Rhode Island earlier this week, has been laid to rest.

Lt. Mazzulla went missing in 1950 in the Korean War and was declared dead a few years later. However, his body was never identified until recently.

“I’m amazed at the support. There were people in church that we hadn’t seen for years and years that were close to my family when my grandmother was alive, they were there,” said Lois Marandola, his niece.

He was buried next to his family at St. Ann’s cemetery in Cranston, following full military honors including a presentation from the Korean Embassy of medals in his honor.

Providence man charged with participating in Jan. 6 riot at US Capitol

McKee, state leaders to hold COVID-19 briefing at 9:30 am

Gov. Dan McKee and state leaders are scheduled to hold a COVID-19 briefing Wednesday morning as the state continues to see a spike in new cases.
LINCOLN, RI・2 HOURS AGO
WPRI 12 News

Steph Machado talks with the police colonel about what's causing the gun violence, how guns are making their way onto the streets and what police are doing to tackle it.
PROVIDENCE, RI・15 HOURS AGO
WPRI 12 News

$5K reward offered for information on dogs abandoned in Portsmouth

A video showed the horse staying in the right-hand lane as cars slowed down to pass by.
TAUNTON, MA・17 HOURS AGO
WPRI 12 News

Police said both dogs "appeared to have been abandoned, lethargic and emaciated."
PORTSMOUTH, RI・1 DAY AGO
WPRI 12 News

Providence principal worked for two districts at once during pandemic

‘This is disturbing’: City leaders seek solutions as shootings soar in Providence

So far this year, 75 people have been shot in Providence -- already surpassing the elevated level seen in 2020.
PROVIDENCE, RI・1 DAY AGO

About 30 children and teens are currently stuck at an East Providence psychiatric hospital, more than a year after state officials promised change.
PROVIDENCE, RI・1 DAY AGO
WPRI 12 News

After taking a year off due to the pandemic, the town of West Warwick is celebrating its 15th annual Christmas tree lighting.
WEST WARWICK, RI・1 DAY AGO
WPRI 12 News

Hospitalizations are up to 155, which is the most in nearly three months.
PUBLIC HEALTH・16 HOURS AGO
WPRI 12 News

It's unclear at this time what led up to the crash, though an SUV with rear-end damage could be seen nearby.
WARWICK, RI・15 HOURS AGO

The shop will be open Monday through Friday from 5 a.m. to 2 p.m. and will have a limited menu.
JOHNSTON, RI・1 DAY AGO
WPRI 12 News

According to a news release, the woman had to have her right leg amputated above the knee following the incident.
FLORENCE COUNTY, SC・23 HOURS AGO
WPRI 12 News

The grocery delivery service offered by Blue Cross Blue Shield of Rhode Island during the pandemic last year is coming back, the insurance company told 12 News.
GROCERY & SUPERMAKET・1 DAY AGO