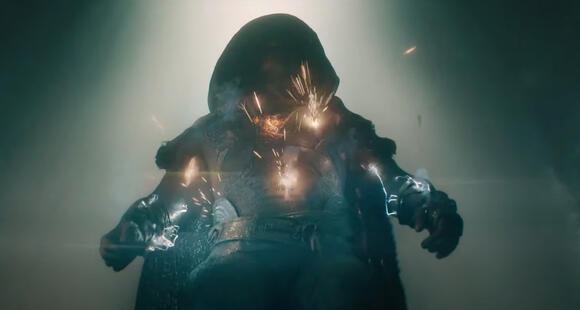 After over a decade of development, fans finally got a first look at “Black Adam,” the feature film starring Johnson as the DC Comics anti-hero and sworn nemesis of Shazam!

Johnson unveiled the teaser on Saturday to open DC Fandome, the virtual fan event designed to promote the vast ecosystem of entertainment based on DC Comics superheroes.

Along with Johnson’s character, “Black Adam” also focuses on the members of the Justice Society: Aldis Hodge as Hawkman, who can fly thanks to his special metal wings; Noah Centineo as Atom Smasher, who can control his molecules and thereby change his size, density, and strength; Quintessa Swindell as Cyclone, who can control the wind; and Pierce Brosnan as Doctor Fate, an archeologist who becomes a powerful sorcerer while wearing the Helmet of Fate.

Johnson started circling the roles of both Black Adam and Shazam! as early as 2007, as the prospect of a feature adaptation bounced through various hands at Warner Bros. and New Line Cinema. By 2014, Johnson signed up to play Black Adam in a “Shazam!” movie, but by 2017, the studio elected to spin off the character into his own franchise, with Zachary Levi headlining 2019’s “Shazam!”

“This film, this universe has been a gigantic passion project of mine for a very long time,” Johnson said before introducing the first look at the film. “The film has without question some of the biggest action sequences I have ever been a part of.”

That same year, Jaume Collet-Serra , who directed Johnson in Disney’s hit film “Jungle Cruise,” signed on to helm “Black Adam,” from a script by Rory Haines, Sohrab Noshirvani and Adam Sztykiel. After the pandemic shutdown, Johnson shot the film earlier this year.

You can watch the first look, in which Black Adam is released after 5,000 years of captivity, below.

Who says superheroes can’t walk on four legs? If you’ve ever wondered who fights crime when The Man of Steel is busy — Dwayne Johnson has your answer. In the upcoming animated movie “DC League of Super-Pets,” Johnson voices Superman’s furry best friend Krypto the Super-Dog, who teams up with other superhero pets to fight crime while their owners are otherwise engaged. In the new trailer, viewers got their first peek at Johnson’s take on the powerful pooch in the movie, written and directed by Jared Stern (“The Lego Batman Movie”) and co-directed by Sam Levine. Other super-powered pets saving the world...
PETS・14 DAYS AGO
Variety

Patty Jenkins Steps Back From Directing Gal Gadot’s ‘Cleopatra,’ ‘Falcon and the Winter Soldier’s’ Kari Skogland to Take Over

Patty Jenkins and Gal Gadot’s “Wonder Woman” reunion will have to wait. Jenkins has relinquished directing duties for “Cleopatra,” a historical drama featuring Gadot as the legendary queen of Egypt. Kari Skogland, who recently directed Marvel’s TV series “The Falcon and the Winter Soldier,” is taking over filmmaking duties. Jenkins isn’t departing the project entirely. She will remain involved in a producing role as she pivots attention to her next two projects, “Wonder Woman 3” for Warner Bros. and “Star Wars: Rogue Squadron” for Disney and Lucasfilm. Paramount Pictures is backing “Cleopatra,” which remains in development stages at the studio. Paramount won the...
MOVIES・1 DAY AGO
Variety

“Spider-Man” star Tom Holland is swapping his web-shooters for dancing shoes. The 25-year-old officially confirmed on Sunday that he’ll portray legendary actor, dancer and singer Fred Astaire in an upcoming biopic for Sony. In a recent profile for GQ, Oscar-nominated producer Amy Pascal teased that she wanted Holland for the part of Astaire in the forthcoming movie, as well as another trilogy of “Spider-Man films.” But during an interview with AP, at an event promoting the upcoming “Spider-Man: No Way Home,” Holland confirmed that he’ll step into the entertainer’s dance shoes for the project, which is still in its early stages. “The script...
MOVIES・1 DAY AGO
Joy 107.1

Mark your calendars for December 7th because the formerly self-proclaimed ‘People’s Champ’ will officially be awarded that title. If you have followed Dwayne Johnson’s career from his days in WWE then you may know that he used to call himself the ‘People’s Champ’. His character after he turned on the corporate organization was all […]
WWE・14 DAYS AGO

Warner Bros. Pictures has released the official trailer of its upcoming animated film titled DC League of Super-Pets. The movie follows the story of Krypto the Super-Dog (voiced by Dwayne Johnson) and his owner Superman (John Krasinski) who share the same powers and fight crime together in Metropolis. However, Krypto’s world turns upside down when Superman and the rest of the Justice League are kidnapped. In order to save them all, Krypto recruits Batman’s hound Ace (Kevin Hart), Wonderwoman’s pig PB (Vanessa Bayer), The Flash’s turtle Merton (Natasha Lyonne) and Green Lantern’s squirrel Chip (Diego Luna) to help him rescue the Justice League.
MOVIES・13 DAYS AGO
Cinema Blend

Dwayne Johnson was already in store for a DC Comics-tastic 2022, as after more than a decade, we’ll finally see him bring Black Adam to life. However, earlier this year, it was announced that The Rock will also voice Krypto the Superdog in DC League of Super-Pets, based on the originally-known Legion of Super-Pets from the Silver Age of Comics. Now the first trailer for the animated movie has arrived, and it reveals that Krypto and his superhero pet allies will have to work together to save the Justice League.
PETS・14 DAYS AGO
The Press

Adele would be starstruck by Dwayne Johnson

Adele would "cry" if she ever got to meet Dwayne 'The Rock' Johnson because she's such a big fan.
CELEBRITIES・4 DAYS AGO
IGN

We've received brief glimpses to this point of Dwayne Johnson in his impending role as anti-hero Black Adam, most notably in the trailer that debuted at DC FanDome 2021. But a new Total Film cover story offers our clearest look yet at Johnson in the new role, and he looks... a lot like Dwayne Johnson.
MOVIES・4 DAYS AGO

Total Film magazine features a cover story on Dwayne Johnson's Black Adam in the latest issue, and the magazine hvae taken to social media to share an advance look at some of the photos included within. While they don't have any shots of the Justice Society, there are a number of different looks at Johnson in his wardrobe as Black Adam, the dark reflection of Zachary Levi's Shazam. In two of the images, Adam is wearing a dark, ragged cloak not unlike the one the old Wizard in Shazam! wore, while a third image seems likely to be during a big battle scene. He is in his antihero outfit, with no cloak, and a bluish color that likely is the lighting used for Black Adam's lightning effects.
MOVIES・7 HOURS AGO
Outsider.com

Dwayne Johnson Reveals Who He Looks Up to the Most

Dwayne Johnson’s had many mentors over the years, as a wrestler and an actor. But who does he look to for guidance and wisdom these days?. The “Red Notice” star recently opened up to “Leo” in a Q&A session about himself as a person, actor, and wrestler. Some of the more insightful moments from the interview, Johnson chose to share on his Instagram page along with incredible photos from the outlet.
COMBAT SPORTS・2 DAYS AGO
COMICBOOKMOVIE.com

BLACK ADAM: Dwayne Johnson's Man In Black Is Ready For His Close Up In New Behind The Scenes Images

2022 is shaping up to be an exciting year for the DC Extended Universe, with Black Adam promising to bring one of Hollywood's biggest stars into that shared world. Dwayne Johnson recently caught up with Total Film to shed some light on his role as the magically charged anti-hero, and it sounds like this character is one he was always destined to bring to life on screen.
MOVIES・8 HOURS AGO
PC Gamer

Who among us does not love Dwayne "The Rock" Johnson? Somebody, I'm sure, but that doesn't help me make my point. One of Hollywood's highest-paid film stars has made his way to Fortnite, finally and inevitably, and he's playing exactly the character that fans thought he was: The Foundation. Fortnite fans are predictably stoked.
VIDEO GAMES・2 DAYS AGO

The ongoing public "feud" between celebrity pals Hugh Jackman and Ryan Reynolds continued over the weekend, with a social media post from Jackman "calling out" Reynolds for the placement of an advertising banner for Red Notice, the actor's new Netflix movie with Dwayne Johnson and Gal Gadot. Why? Well, because the placement is less than a block down the street from a large sign celebrating the upcoming Broadway run of The Music Man, starring Jackman and Sutton Foster. Feeling upstaged, Jackman took to social media to remind Reynolds that the Red Notice poster could have gone literally anywhere else in all of New York.
CELEBRITIES・1 DAY AGO
digitalspy.com

The first trailer for the upcoming DC League of Super-Pets has finally been released, and it's the news we never knew we needed. The new animated feature has a star-studded cast, which includes The Office US's John Krasinski as Superman, Red Notice's Dwayne Johnson as Krypto the Super-Dog, and Jumanji's Kevin Hart as Ace the Bat-hound.
MOVIES・13 DAYS AGO
GeekTyrant

Johnson also opened up about the film and the characters that he’s playing. Black Adam is an antihero and one of the most powerful beings in DC Universe. He was a slave from Kahndaq who was granted superpowers from the wizard Shazam. But, Adam ended up choosing a dark path of revenge against those who wronged him, and he’s looking to settle the score by any means necessary.
MOVIES・6 HOURS AGO
COMICBOOKMOVIE.com

There's a lot of excitement surrounding Black Adam, but for many fans, seeing Dwayne Johnson's anti-hero clash with the likes of Shazam and Superman is what they're really waiting for. While those meetings are bound to happen eventually, the origin story comes first as Warner Bros. and the actor look set to establish that new hierarchy of power in the DCEU we keep hearing so much about.
MOVIES・6 HOURS AGO