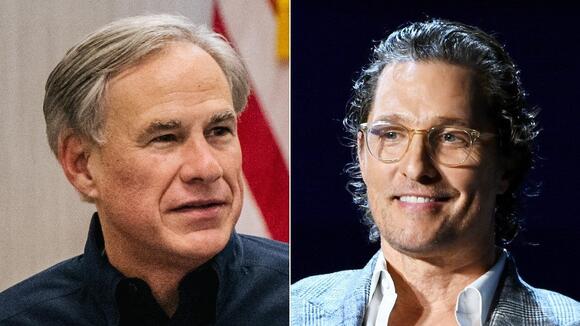 “He’s treading extremely carefully right now to prolong this moment of fame and attention to make it seem like he’s a serious candidate for governor. But he hasn’t said a single thing on policy or what he’d do differently from the current governor,” Siegel, a former congressional candidate, told Hill.TV’s “Rising.”

McConaughey, who hasn’t entered the race or announced a party affiliation, polled ahead of Gov. Greg Abbott (R) in a September survey conducted by The Dallas Morning News and University of Texas at Tyler.

But Siegel argued that it’s unlikely the actor would make it through either party’s primary.

“He doesn’t have a base among Democratic primary voters or Republican primary voters,” Siegel said. “What we seem to be talking about is a spoiler campaign that would likely cinch it for Greg Abbot in the general election.”

Siegel told Hill.TV that Texas Democrats expect former Rep. Beto O’Rourke (D-Texas) to announce his candidacy soon, and called McConaughey a “shiny object” for the media in the meantime.

“Swing voters are not moderate voters,” he said. “These are people who are generally not paying attention who often don’t vote in elections and they’re waiting to hear someone articulate a vision of how government will improve their lives.”

Candidates need to file by Dec. 13 ahead of the March 2022 primary. Siegel said a Democrat with a message that appeals to swing voters could unseat Abbott in the historically red state.

Florida Democrats are scrambling to claw their way back from the brink of irrelevance after an unsparingly brutal midterm election cycle that saw some of the last vestiges of the party’s power in the Sunshine State slip away. Their challenges are steep. The Florida Democratic Party, now without a chair, has been mired in financial…
FLORIDA STATE・15 HOURS AGO
The Hill

Groups file ethics complaint over Sinema’s alleged use of staff

More than a dozen activist groups, including several based in Arizona, have filed a complaint with the Senate Ethics Committee asking for an investigation into media reports that Sen. Kyrsten Sinema (I-Ariz.) required her Senate staff to run personal errands such as grocery shopping and getting her home internet fixed.   Sinema’s spokeswoman has denied…
ARIZONA STATE・15 HOURS AGO
The Hill

Victoria Spartz passes on Senate run, to retire from Congress at end of term

Rep. Victoria Spartz (R-Ind.) on Friday announced she will not run for Congress in 2024, retiring from the House and passing on a bid for Indiana’s open Senate seat. “It’s been my honor representing Hoosiers in the Indiana State Senate and U.S. Congress and I appreciate the strong support on the ground. 2024 will mark…
INDIANA STATE・9 HOURS AGO
The Hill

Sen. Roger Marshall (R-Kan.) said Friday afternoon that the “Chinese spy balloon” that has been drifting over the continental United States has been seen over northeast Kansas.  Marshall tweeted that his staff is in contact with law enforcement officials about the balloon.  “I condemn any attempts the Chinese make to spy on Americans,” he said.…
KANSAS STATE・5 HOURS AGO
The Hill

Three civil rights groups have vowed to take “swift legal action” against a slate of proposed restrictions on gender-affirming health care for transgender youths and adults in Oklahoma should any of them become law. Lawmakers have introduced at least 15 bills threatening to severely limit access to treatments including puberty blockers, hormones and gender-affirming surgeries…
OKLAHOMA STATE・1 DAY AGO
The Hill

Biden to travel to Wisconsin, Florida after State of the Union address

President Biden will travel to Wisconsin and Florida in the days after he delivers the State of the Union address. The trips are part of an uptick in travel in the new year “to showcase how the President’s plan is creating jobs, rebuilding our infrastructure, lowering costs for families, investing in our future, and delivering…
WISCONSIN STATE・4 HOURS AGO
The Hill

The Virginia governor’s recent push to remove his state from consideration for construction of an EV battery plant is making waves. We’ll also look at House Republicans starting their climate oversight on the Biden administration.  ♨️ Plus: Florida Gov. Ron DeSantis weighs in on gas stoves. Welcome to The Hill’s Energy & Environment newsletter, your source…
VIRGINIA STATE・1 DAY AGO
The Hill

Former Vice President Mike Pence is traveling to South Carolina on Monday amid increasing speculation that he’s eyeing a 2024 White House bid and following former President Trump’s visit to the state last month. Pence will visit with local law enforcement officials, including Police Chief Reggie Burgess, while in North Charleston and participate in a…
IOWA STATE・3 HOURS AGO
The Hill

Sen. Josh Hawley (R-Mo.) is calling for the Senate Homeland Security Committee to investigate what he says is the Biden administration’s “baffling response” to a Chinese surveillance balloon that floated over U.S. missile installations in Montana, triggering alarms at the Pentagon.   “We have an obligation to obtain a full understanding of the surveillance that…
MONTANA STATE・5 HOURS AGO
The Hill

The Biden administration will distribute $580 million to 15 Native American tribes toward settling water rights claims, the Interior Department announced Thursday night. The funds will include $460 million allocated from the bipartisan infrastructure law for settlements reached before November 2021 and another $120 million from the Reclamation Water Settlement Fund, which Congress established in…
MONTANA STATE・5 HOURS AGO
The Hill

Traffic stops should not be deadly, DC can lead the way

If we want to reduce — and eventually end — police violence, municipalities can begin by removing police from traffic stops.
WASHINGTON, DC・1 DAY AGO
The Hill

First lady Jill Biden will attend the Super Bowl in Arizona later this month, the president announced during a fundraiser in Philadelphia on Friday. Jill Biden, a Philadelphia native, is a devout Eagles fan and has been donning Eagles shirts recently while the team made its way to the Super Bowl “Jill is out in…
PHILADELPHIA, PA・3 HOURS AGO
The Hill

The Ohio Department of Education is reportedly investigating a pro-Nazi homeschooling network run by a couple in the state, according to several media outlets. The department is “actively reviewing compliance with statutory and regulatory requirements,” an official with the state agency told The Washington Post, after reports emerged last week about the homeschooling network known…
OHIO STATE・6 HOURS AGO
The Hill

Many former customers of Blue Cross Blue Shield (BCBS) health plans woke up on Friday to discover they had been notified of insurance claims despite not being covered by the provider for some time, causing concerns that a security breach could have leaked customer information. Several people on social media on Friday reported receiving insurance…
MONTANA STATE・4 HOURS AGO