MLB Roundtable: Who's Going to Win the NLCS? 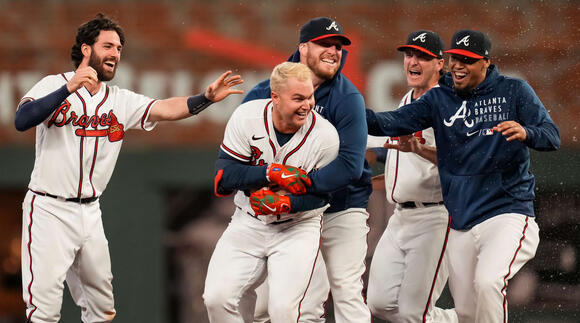 Will it be the Dodgers or the Braves representing the National League in the World Series?

This rematch from last year's NLCS may seem like a bit of a let down following the epic NL West Division Series showdown that preceded it. However, don't let that take away from the excitement still ahead.

The Braves were one win away from upsetting the Dodgers last October, and Atlanta's pitching staff is deeper now than it was then. But Los Angeles, too, is a more complete team now, in no small part because of the trade deadline acquisitions of Max Scherzer and Trea Turner .

The winner of this series goes on to face either the Astros or the Red Sox in the World Series. Will the Dodgers earn their fourth NL pennant in five years? Or will the Braves finally return to the Fall Classic for the first time since 1999? Let's make our picks.

Atlanta had Los Angeles on the ropes in the NLCS last year. Add Charlie Morton, a much improved Austin Riley and home field advantage, and the Braves can win a low-scoring series.

NLCS MVP Prediction: Max Fried. He has been one of the best pitchers in baseball for more than two months: 8–0 with a 1.35 ERA in 12 starts.

I could be convinced in Atlanta's favor: The team will host the series and has spent the last three days resting its players, plus there's always potential for a letdown by the Dodgers after such a tense NLDS against such a good team . But it's really hard to pick against a club that employs Mookie Betts, Max Scherzer and Walker Buehler. Even if Max Muncy doesn't make it back for this one, Los Angeles boasts a lineup that can overcome even Atlanta's strong pitching staff, and with Ronald Acuña Jr. still sidelined , the Dodgers' pitchers should be able to squeak by Atlanta's lineup.

The Braves do have the ability to make this a highly competitive series—just look at how they overpowered the Brewers' talented pitching in the NLDS. Don't judge this Atlanta team by its regular-season record: The front office's wholesale remake of its outfield at the deadline remains one of the most impressive trade-deadline maneuvers in recent memory. But, in the end, the Dodgers are simply too deep and too talented to pick against.

Different year, same result, although Atlanta has the pieces to make this closer than many expect. Everyone knows Charlie Morton's postseason credentials , but Max Fried and Ian Anderson have also proven to be more than capable in October, combining for a 1.69 ERA in 10 playoff starts (53 1/3 innings) dating back to last year . The Dodgers' bullpen sticks out as an obvious advantage, however. Luke Jackson and Tyler Matzek appeared in all four games of the NLDS against Milwaukee, highlighting manager Brian Snitker 's flimsy trust in the rest of his options. Even closer Will Smith—who served up the home run that changed the complexion of last year's NLCS to the Dodgers catcher of the same name , spawning a thousand memes—seemed one bad outing away from being replaced near the end of the season. Additionally, if Jorge Soler misses most of this series after testing positive for COVID-19 , that will have the Braves relying on Guillermo Heredia far more than planned after their midseason outfield overhaul.

The most difficult thing for a team to do in baseball over the last 20 years is win consecutive World Series. The second most difficult thing is for a team to return to the Fall Classic in its title-defense season, which has happened only twice ('01 Yankees, '09 Phillies). The 2021 Dodgers will be the third. They made it through the two NL teams I thought had a chance to knock them out of the postseason—the surging Cardinals in the one-game wild-card round, and the best ever regular-season Giants team. As others in here have pointed out, Atlanta is far better than people think. Its starting rotation is excellent, and as Los Angeles knows all too well, Joctober is a very real thing. These games should be close, and this series should go the distance. In the end, the Dodgers will take advantage of a thinner Braves bullpen as it fatigues later in the series.

The reigning champs have been pushed to the brink in the last week , but their talent advantage over the Braves will shine through. The Dodgers have enough depth to overcome the hot starting pitching from Max Fried and Charlie Morton. Atlanta will do enough to avoid a sweep, but the Dodgers have a big enough advantage to safely secure a spot in the World Series.

Will Ozzie Albies finally get his bat going in the World Series against the Houston Astros? Did Brian Snitker make the right move by sliding Ozzie Albies down the batting order?
MLB・28 DAYS AGO
Larry Brown Sports

After coming up short in this year’s playoffs, the Los Angeles Dodgers could be going back to their fundamentals: acquiring another big name. Bob Nightengale of USA Today Sports reported this week that the Dodgers are interested in former Cy Young candidate Sonny Gray, having engaged in trade talks with the Cincinnati Reds. Fellow Reds starter Luis Castillo was also included in those discussions, Nightengale adds.
MLB・17 DAYS AGO
FanSided

The Atlanta Braves are on top of the world, and rightly so. But just as the World Series ends, the offseason begins. These Braves won’t be back to potentially repeat. The Braves surprised all of baseball, taking a team without Ronald Acuña, Jr. and a suspect bullpen to the MLB mountaintop. Now, Alex Anthopoulos must start all over again.
MLB・28 DAYS AGO
Larry Brown Sports

Freddie Freeman has donned only a single uniform throughout his Major League Baseball career. And if the Atlanta Braves have their way, it’s the only uniform he’ll ever wear. But the path to that end may not come without come some hiccups. Freeman is currently a free agent and seeking...
MLB・18 DAYS AGO

It could be the end of an era in Los Angeles. Major League Baseball teams have until 5 p.m. E.T. on Sunday to make qualifying offers to free agents. The qualifying offer – a one-year deal for 2022 worth $18.4 million – is only available for certain free agents. If a player passes on a qualifying offer and signs elsewhere, their old team receives a MLB Draft pick compensation.
NFL・24 DAYS AGO
FanSided

The Atlanta Braves need to make the right moves in free agency to repeat as world champions. For the first time in 26 years, the Atlanta Braves enter the offseason as World Series Champions. Atlanta overcame all odds to win the 2021 Fall Classic over the Houston Astros. This team...
NFL・13 DAYS AGO
dodgerblue.com

The Los Angeles Dodgers fell short of their goal of repeating as World Series champions and now face many difficult roster decisions this offseason. Chris Taylor was among the team’s players to reach free agency, which is a group that consists of several key contributors. He earned a first career...
MLB・10 DAYS AGO

After seven years with the Dodgers, Corey Seager is trading Dodger blue for a whole lot of green. A big, Texas-sized pile of green. Seager agreed to a 10-year, $325 million deal with the Texas Rangers on Wednesday, leaving LA in his rearview mirror. In the wake of Seager’s signing...
MLB・1 DAY AGO
FanSided

It remains unclear where Freddie Freeman will end up, but one thing is clear: there are no worse places for Braves fans to see him than these 3 teams. Although Braves first baseman Freddie Freeman rejected the Braves’ initial extension offer of five years for $135 million, it doesn’t mean that he rejected the prospect of returning to Atlanta.
MLB・8 DAYS AGO

Dansby Swanson has message for Braves about Freddie Freeman

Freddie Freeman’s impending free agency is not lost on his Atlanta Braves teammates, and one of them addressed that publicly during the team’s championship parade on Friday. The Braves’ parade culminated in a rally at Truist Park where numerous players spoke to the capacity crowd. Among them was shortstop Dansby...
MLB・26 DAYS AGO
FanSided

The hot stove will be cranking somewhat soon, but for now we’re living in the world of speculation. That’s what makes the offseason fun, anyway. For the Los Angeles Dodgers, a ton of heavy lifting has to get done with so many key players hitting free agency (plus a likely legal battle with Trevor Bauer that will determine money being freed up or thrown away). You already know who the team is in danger of losing.
NFL・18 DAYS AGO
The Spun

The Los Angeles Dodgers bolstered their pitching staff on Monday afternoon. According to MLB insider Ken Rosenthal, the Dodgers have signed free-agent left-hander Andrew Heaney. Heaney spent the first half of the 2021 season with the Angels before he was traded to the New York Yankees. He struggled with both...
MLB・23 DAYS AGO
FanSided

The Los Angeles Dodgers had a major depth issue in 2021. There’s not much to debate, either. When Steven Souza Jr. is getting meaningful reps in the NLCS, the problem speaks for itself. On Friday, the Dodgers took the necessary steps by clearing space off their 40-man roster, and two...
MLB・8 DAYS AGO
dodgerblue.com

The Los Angeles Dodgers had Will Smith, Max Muncy, Justin Turner, Corey Seager, Trea Turner, Mookie Betts, Walker Buehler, Max Scherzer, Julio Urias and Kenley Jansen named among the nominees for the 2021 All-MLB Team. This is the third annual recognition for the top players, with winners being announced on...
MLB・20 DAYS AGO
Dodgers Nation

With the offseason upon us, we took to social media to ask fans something that is always a hot topic. Who would you bring back if you could bring one of your favorite former Dodgers? In this list, we featured Kiké Hernandez, Joc Pederson, Alex Verdugo, and Yasiel Puig. Thousands of fans chimed in with strong cases for each. We dive into some of the responses and give our pick.
MLB・23 DAYS AGO
Sportsnaut

Last season, Eddie Rosario went from playing on a .500 Cleveland team to playing on another .500 team in the
NFL・22 HOURS AGO
FanSided