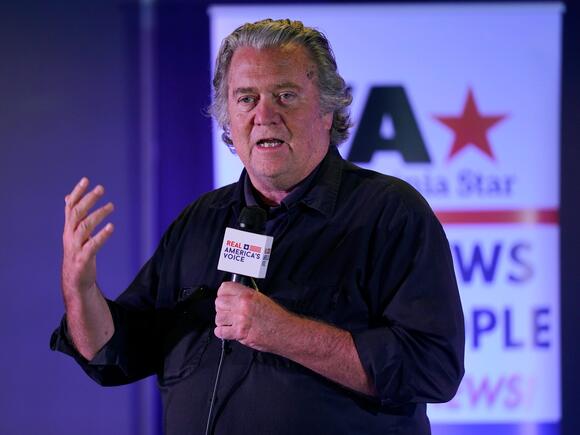 Virginia Republican gubernatorial nominee Glenn Youngkin on Thursday criticized attendees of a recent GOP rally who recited the Pledge of Allegiance to a flag that was said to have been flown at a Jan. 6 rally near the US Capitol before the deadly riot at the complex, according to The Associated Press .

Youngkin, a former private equity executive who is currently locked in a tight race with former Democratic Gov. Terry McAuliffe, did not attend the "Take Back Virginia" rally on Wednesday in the electorally-pivotal Richmond suburb of Henrico County.

However, when pressed to respond to the usage of the flag in question for the pledge, the first-time candidate in a statement disavowed the action. The emcee at the event said that the flag "was carried at the peaceful rally with Donald J. Trump on Jan. 6."

"It is weird and wrong to pledge allegiance to a flag connected to January 6," he expressed. "As I have said many times before, the violence that occurred on January 6 was sickening and wrong."

The event, which featured a call from former President Donald Trump and an appearance by former White House chief strategist Steve Bannon, was organized by conservative talk show host John Fredericks, who was Trump's ex-campaign chairman in Virginia.

McAuliffe, who served as governor of the Commonwealth from 2014 to 2018, on Thursday challenged Youngkin to "go before the cameras" and state that the pledge to the Jan. 6 flag was unseemly and called the action "one of the darkest moments" of the Republican nominee's campaign.

The Democratic nominee then quickly released an advertisement highlighting the rally and tweeted a statement lambasting Youngkin's response to the Jan. 6 flag recitation.

"'Weird??' Glenn - people died during the January 6th riot Donald Trump and others celebrated in your honor last night," he wrote. "If you can't condemn last night's rally and Trump's deadly conspiracies, you don't have the courage or character to serve as governor."

At the rally, Trump, who previously endorsed Youngkin, implored his supporters to back the first-time candidate.

"Glenn Youngkin is a great gentleman," Trump said via phone. "We've got to get him in. I know Terry McAuliffe very well and he was a lousy governor."

While speaking via phone, Trump continued to repeat his grievances about the 2020 presidential race, calling it "the most corrupt election in the history of our country," according to The Richmond Times-Dispatch .

Despite no evidence of mass voter fraud in Virginia, Bannon, who faces criminal contempt charges for refusing to cooperate with the bipartisan Jan. 6 House committee, said that the close gubernatorial race casts doubt on President Joe Biden's 10-point victory (54%-44%) over the former president in the Commonwealth last year.

"He didn't win by 10 points, OK, no doubt about that," Bannon said at the event, according to The Times-Dispatch, while providing no evidence to support his claim

In the final gubernatorial debate last month, Youngkin said that it was his belief that there was no "material fraud" in last year's election, calling it "certifiably fair."

However, the Republican has still pledged to prioritize election integrity if elected to office, calling for an "audit" of voting machines in the Commonwealth.

its sickening every time I hear or see Trump speak. every word is negative! putting this country down or people down.. know wonder why Putin likes him so!

Who is this Brandon? What is FJB? What is this Nazicrat?Is English not your 1st language?Please,hire someone with a better command of the English language to help explain your political ideology.

Mitch McConnell won't offer a GOP legislative agenda before the 2022 midterms, according to Axios. McConnell reportedly feels that such an agenda would only become fodder for Democratic attacks. Kevin McCarthy feels differently and wants his members to articulate a vision to voters, per Axios. Senate Minority Leader Mitch McConnell...
CONGRESS & COURTS・17 HOURS AGO
Business Insider

Longest-serving House Republican dismisses GOP critics of McCarthy's leadership: 'Show me anybody else can do the job better'

Rep. Don Young dismissed critics of Kevin McCarthy in a recent interview with The Washington Post. "Show me anybody else can do the job better than he can," he said of the California Republican. Young also brushed off critics who are upset over his support of the bipartisan infrastructure bill.
CONGRESS & COURTS・14 HOURS AGO
Business Insider

John Eastman is the second witness who has invoked or plans to invoke the Fifth Amendment in response to a January 6 committee subpoena.
PRESIDENTIAL ELECTION・1 DAY AGO
Business Insider

Mitch McConnell would eliminate the filibuster if he was in Democrats' shoes, Jim Acosta says

The money is supposed to publicly fund presidential campaigns. But it doesn't. Republicans and Democrats in Congress can't agree on what to do with the ever-growing pot. Charities told Insider the money could do great good for suffering Americans. Holed away in a government account is a massive cash stash...
U.S. POLITICS・15 HOURS AGO
Business Insider

Meet Michael Smerconish, a radio host and political commentator who will take over Chris Cuomo's primetime hour on CNN

While Smerconish will replace Cuomo starting next week, the network has not announced any immediate plans for a permanent replacement.
NEW YORK CITY, NY・6 HOURS AGO
Business Insider

Kamala Harris' staff turnover driven by burnout and apprehension to being labeled a 'Harris person': Axios

A strategist who spoke with Axios said that Harris needed "someone loyal who can think methodically" to help spread her message and boost her numbers.
U.S. POLITICS・18 HOURS AGO
Business Insider

Wisconsin Gov. Tony Evers, a Democrat, vetoed five anti-abortion bills on Friday. The bills had been supported and passed by the Republican-led state legislature. The vetoes came just two days after the conservative US Supreme Court justices heard arguments in a case that could overturn Roe v. Wade. Wisconsin Gov....
WISCONSIN STATE・13 HOURS AGO

Trump has criticized Katie Britt, saying she's "not in any way qualified and is certainly not what our Country needs or not what Alabama wants."
CULLMAN, AL・1 DAY AGO
Business Insider

Georgia's chief election official Brad Raffensperger ignored a text from Mark Meadows about the 2020 election because his staff didn't know if it was real, report says

Meadows, then the White House chief of staff, played a key role in furthering Trump's efforts to pressure officials and overturn his election loss.
GEORGIA STATE・1 DAY AGO
Business Insider

A Trump-loving former KKK leader who was jailed for beating a Black man is running for office as a Republican in Georgia, report says

Chester Doles is running as a Republican for a spot on the Lumpkin County Board of Commissioners. He spent decades involved with the Ku Klux Klan, including a spell as Maryland's Grand Klaliff. Doles was jailed in 1993 after being convicted of beating a Black man in Maryland. Chester Doles,...
GEORGIA STATE・21 HOURS AGO
Business Insider

Meadows also pushed a conspiracy theory that Italy hacked into voting machines with military satellites to steal the election from Trump.
PRESIDENTIAL ELECTION・1 DAY AGO

Kevin McCarthy avoided condemning Lauren Boebert's Islamophobic comments about Ilhan Omar, instead praising her for a phone call that ultimately went off the rails

McCarthy signaled he won't take any action on Boebert, even as dozens of House progressives have called for her to lose her committee assignments.
CONGRESS & COURTS・1 DAY AGO
Business Insider

Stacey Abrams blasts Georgia Gov. Brian Kemp: 'I think we have a failed leader who is currently occupying the office'

Kemp blasted his former opponent's entry into the gubernatorial race, tweeting that if Abrams was at the helm of government, "Georgia would have shut down."
GEORGIA STATE・15 HOURS AGO
Business Insider

Tesla CEO Elon Musk took a jab at older lawmakers, tweeting that there should be an upper age limit for anyone planning to run for political office.
ECONOMY・23 HOURS AGO

Fauci said Logan's comments were "an insult to all of the people who suffered and died under the Nazi regime in the concentration camps."
CONGRESS & COURTS・1 DAY AGO
Business Insider

Rep. Thomas Massie posted a holiday photo of his family posing with guns, asking Santa for ammunition. The father of a Parkland victim called it a "very nasty post" and said it was "part of the problem." On Tuesday, a gunman opened fire at a high school in Michigan, killing...
PARKLAND, FL・5 HOURS AGO
Business Insider

A Republican lawmaker from Maine who fought against COVID-19 mandates has resigned from his post. Rep. Chris Johansen stepped down from his position months after his wife died of the coronavirus. In his resignation letter, Johansen defended his opposition to COVID-19 rules. A Republican lawmaker from Maine who vigorously fought...
MAINE STATE・1 DAY AGO
Business Insider

The public could soon see an 'alternative' version of the Mueller report that's been kept under wraps, new court filing says

The DOJ may soon release an "alternative" version of the Mueller report, Politico first reported. Prosecutors told a judge that they're in the initial stages of reviewing the document for release. Mueller's deputy Andrew Weissmann revealed the existence of the alternate report in his book last year. The Justice Department...
CONGRESS & COURTS・1 DAY AGO