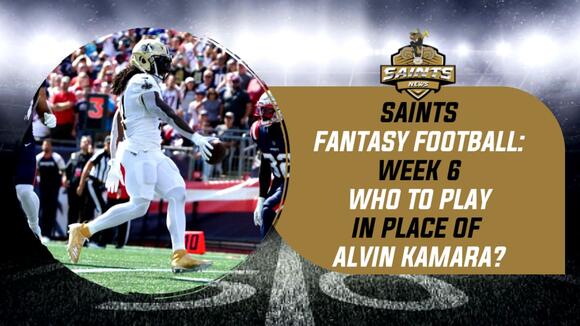 Saints News Network's Fantasy Analyst Brendan Boylan looks at three players who could start in place of Alvin Kamara during his BYE in Week 6.

Saints Fantasy Football: Start 'em or Sit' em returns for the 2021 Season as Saints News Network's Fantasy Football analyst Brendan Boylan provides you with weekly advice regarding members of the Black and Gold.

With the Saints on their bye week, this week here is a look at three players who could start in place of Alvin Kamara in Week 6.

Follow along throughout the year to dominate your fantasy leagues and earn bragging rights at home, in the office, or amongst your friends!

With an injury to Saquon Barkley that is expected to sideline him for multiple weeks, former Denver Broncos running back Devontae Booker is at the top of most wavier wires headed into Week 6.

After Barkley's exit against the Cowboys, Booker carried the rock 16 times for 42 yards and a score. The Giants running back also scored on a receiving touchdown and totaled up 20.8 fantasy points (PPR) in the process.

Booker promises to be a decent play for the next few weeks as Saquon returns from injury. Consider him an RB2 or Top FLEX option this week and potentially the weeks that follow.

Similar to the Giants situation, mentioned above, the Kansas City Chiefs will be without Fantasy Football star and former LSU product Clyde Edwards-Helaire for an extended amount of time after suffering an injury last week.

In the loss to the Bills, Williams carried the ball 5 times for 27 yards and reeled in 3 receptions for 18 yards. While the numbers are not all that impressive, any time you are able to pick up a starter in a high-powered offense in the middle of the season it is a steal.

Williams, like Booker, should be viewed as a viable option while Edwards-Helaire is out. Use him cautiously though, with Patrick Mahomes at the helm the Chiefs could restore to simply running the ball less. Williams is a solid FLEX this week.

A familiar face to Saints fans makes the list this week... Latavius Murray who spent the last two years in New Orleans has found a new home in Baltimore but remains a fantasy question mark week in and week out.

Since Murray joined the Ravens his fantasy input has relied solely on whether or not he finds the end zone. In five games, Murray has found paydirt three times averaging 10.1 fantasy points per game in those contests. However, when he has not scored a touchdown Murray is averaging just 3.9 fantasy points a contest.

The 2016 Pro-Bowl selection is averaging 10 carries a game so proceed with caution. Murray is a true touchdown or bust option. If you have no better option he is worth a play but you better pray he finds the end zone.

For all the latest New Orleans Saints News & Rumors follow:

Travis Kelce and the Chiefs may have this Sunday off, but the tight end still made his weekend about football. Kelce and girlfriend Kayla Nicole attended Sunday’s Eagles game against the Giants at MetLife Stadium in New Jersey, where they got to watch his older brother, center Jason Kelce, in action.
NFL・7 DAYS AGO
The Spun

The New York Giants topped the Philadelphia Eagles, 13-7, on Sunday afternoon. New York’s defense stifled Jalen Hurts and the Eagles offense. The Giants slowed down Hurts, who had been playing at a high level in recent weeks. Hurts finished the game with just 129 yards, no touchdowns and three...
NFL・7 DAYS AGO
myq105.com

We were hoping Gronk and Brown would return soon, but that doesn’t look like it’s happening right now. Rob Gronkowski’s injuries from earlier this season seem to be bad enough that the Buccaneers have signed , a tight end, to the practice squad. Fells is a former basketball player-turned football player, at 6’7′ tall.
NFL・25 DAYS AGO
The Spun

For the past three weeks, Saints running back Alvin Kamara has been sidelined with a knee injury. While there’s no clear timetable for his return, the All-Pro did just post a cryptic message on Twitter. Moments ago, Kamara tweeted “I’m on it.”. There’s no telling if this is Kamara’s way...
NFL・10 DAYS AGO

The Buffalo Bills Quarterback room will have one open seat this year as they prepare for their Monday Night matchup against the New England Patriots. On Tuesday, the Bill announced that backup quarterback Jack Fromm was signed by the New York Giants from the Bills practice squad. Fromm was a...
NFL・5 DAYS AGO
The Spun

Buccaneers quarterback Tom Brady has beaten every team in the NFL throughout his career but there’s one team that he loves to win against more than any other. It should come as no one’s surprise that it’s the New York Giants. Brady lost to New York twice in the Super Bowl while he was with New England, one of which came in 2008 when his team was vying for a perfect season.
NFL・13 DAYS AGO
The Baltimore Sun

There was a time when the Ravens would have celebrated holding Le’Veon Bell to 48 yards on 11 carries. Not so long ago, he lived in their nightmares — those outside runs on which he’d wait and wait, then snap off a double-digit gain, or the pass routes on which he’d toy with some poor linebacker. As an All-Pro for the Pittsburgh Steelers, he played a starring role in some of the most painful ...
NFL・26 DAYS AGO
The Spun

The Baltimore Ravens lost to the Pittsburgh Steelers on Sunday afternoon and have reportedly suffered a crushing injury loss, too. According to NFL Network insider Ian Rapoport, the Ravens have lost standout defensive back Marlon Humphrey for the season. “Marlon Humphrey is suspected to be out for the season with...
NFL・14 HOURS AGO

A look at who's in and who's out for the Saints for their Week 10 matchup against the Titans.
NFL・21 DAYS AGO
SaintsNewsNetwork

Best Performances From the Saints Gut-Wrenching Loss to the Titans

New Orleans stumbled their way to another big deficit and saw a furious fourth quarter rally fall short. Here were their best performances from a bitter loss.
NFL・21 DAYS AGO
SaintsNewsNetwork

The latest BLEAV in Saints podcast breaks down the latest loss to the Eagles and previews how things might look on a short week against the Bills.
NFL・12 DAYS AGO
SaintsNewsNetwork

Kenny Vaccaro, former 15th overall pick from 2013 for the Saints, hangs up his cleats and turns to his passion for gaming.
NFL・4 DAYS AGO

The Saints and Cowboys meet for the 31st time in NFL history, and are sure to attract a high viewing crowd on Thursday Night Football.
NFL・6 DAYS AGO
The Spun

There’s been some speculation this week that the New York Giants might try to make a move for Seattle Seahawks star quarterback Russell Wilson this offseason. Several analysts at ESPN have given the idea some legs today, leaving Giants fans to ponder the possibilities. If the season ended today, the Giants would have two first-round picks – No. 6 and No. 7 – and a big question mark at quarterback.
NFL・3 DAYS AGO
USA TODAY Sports Media Group

The Kansas City Chiefs defeated the Denver Broncos 22-9 in Week 13, marking their fifth consecutive win of the 2021 NFL season. One could say the team is currently on fire, but fans were greeted with a different type of fire when they left Arrowhead Stadium after the game. A number of fans captured images and video of a large brush fire near traffic as they waited to exit the south parking lot. The fire was located away from the stadium, but still quite close to bystanders as they headed home after the game.
NFL・10 HOURS AGO
The Spun

Saquon Barkley is in his fourth year as a running back for the New York Giants. Many fans are now hoping there won’t be a fifth. The former Penn State star running back was an immediate sensation for the Giants. The No. 2 overall pick in the 2018 NFL Draft starred right away in New York. However, it’s been mostly downhill since his injury at the beginning of the 2020 season.
NFL・2 HOURS AGO

Who's to Blame for the Saints' Floundering Offense?

The New Orleans offense has been "offensive," but the blame for the inefficiencies begins and ends with the man in charge.
NFL・5 DAYS AGO
Sportsnaut

Can New Orleans have early rushing success against a rugged Philadelphia defense to maintain balance and avoid the second half deficits they've faced in each of the last two weeks?
NFL・17 DAYS AGO
SaintsNewsNetwork

3 Takeaways From the Saints Week 10 Loss to the Titans

Three Takeaways from the New Orleans Saints' Week 10 Loss to the Tennessee Titans at Nissan Stadium.
NFL・19 DAYS AGO