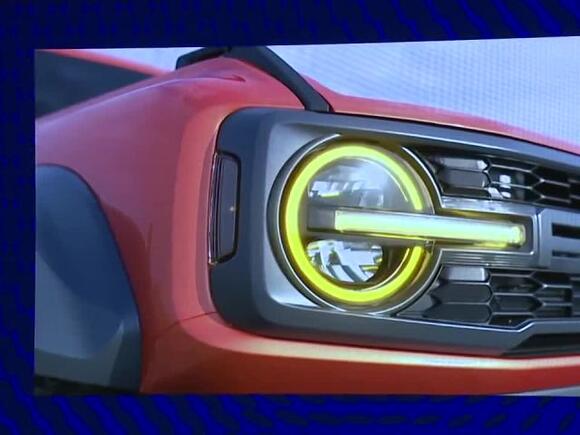 Ford Motor Company made big news on Tuesday at Motor Bella when it announced a Raptor version of the all-new Bronco is coming next year.

The automaker unveiled the Bronco last year and said that more than 125,000 orders have been placed for the SUV so far, with many people still waiting on their vehicle.

According to Ford, they wanted to add two new colors to the Bronco lineup next year – Eruption Green and Hot Pepper Red – but that's not all they are adding.

The company said the Bronco Raptor will be the highest off-road performance Bronco yet, and adds to the Raptor family that already includes the F-150.

During the press conference, Ford said it would have more information to share soon, sooner than it takes the next Jurassic Park sequel to debut.

Ford first introduced the Raptor in 2010 and has continued to do so with every version since.

It's been a year since we reported that Ford Performance planned to sell the Mustang Shelby GT500's supercharged V8 as a crate engine. It's not as powerful as Chevy's ridiculous 10.4-liter crate engine with 1,004 horsepower, but the Ford's 5.2-liter Predator V8 is no slouch. It produces 760 hp and 625 lb-ft of torque, enough to propel the GT500 to 60 mph in under 3.5 seconds. Now, custom builders can install this brawny power plant in whatever project car they're working on. But the supercharged V8 carries a hefty price tag. In fact, it'll cost you almost as much as a brand-new Ford Mustang coupe.
BUYING CARS・11 DAYS AGO
KPVI Newschannel 6

Remember the scene in Jurassic Park (the original, not one of the 52 remakes that have been made) where the velociraptors take on the T-Rex and end up destroying it? As fearsome as the T-Rex was it was the velociraptors that struck the most fear as they were both fast and tenacious.
CARS・3 DAYS AGO
fordauthority.com

The 2021 Ford Bronco comes with a variety of tire sizes depending on trim, but adding the Sasquatch Package provides a prodigious amount of rubber in the form of beefy 35-inch tires. Of course, bigger is almost always better, and that’s precisely why the Ford Bronco Raptor and 2023 Ford Bronco DR off-road racer will come with even larger 37-inch tires from the factory. Those tires require some pretty large fender flares to protect the SUV’s bodywork, but there’s no covering up the insanely huge 40-inch tires the folks at 2 Fat Guys Off-Road in San Antonio, Texas fitted to this 2021 Ford Bronco.
SAN ANTONIO, TX・5 DAYS AGO
Motorious

While the excitement around the new Ford Bronco is at a fever pitch, the original Ford Bronco simply can’t be beat. The market for classic first-gen Ford Broncos is red hot these days, and this cool blue '68 Bronco is one mean machine. This 1968 Ford Bronco is ready for cruising and showing, and you can add it to your vintage SUV collection.
CARS・10 DAYS AGO

The New Ford Ranger Has An Angry Face And A V6, Raptor En-Route

Ford has revealed its aggressively-styled new Ranger pick-up, created via a joint venture with VW. If you live in the UK and want a pick-up truck, the Ford Ranger has long been the way to go. The Blue Oval’s versatile load-lugger dominates the market, and just to make things even worse for makers of rival cars, there’s a new and improved version. This time, though, Ford has outside help.
CARS・3 DAYS AGO
Gear Patrol

Here's How the Ford Bronco Has Changed Over the Decades

The Bronco is an icon in the Ford lineage — it sits right there alongside the Mustang in the stable of Ford's horse-related nameplates. Ford finally brought back the Bronco after 25 years, and the surge in popularity of the vintage ones is a major reason why. Stunning first-generation Bronco resto-mods can command well into the six figures, and later Broncos — as well as rad-era off-road trucks from the 1980s and 1990s — are having a moment.
CARS・12 DAYS AGO
CarBuzz.com

The Ford Bronco Heritage Edition Will Be Cooler Than We Thought

The Ford Bronco has been released into the wild, and it is clear that people simply can't get enough of this retro-inspired off-roader. The waiting list for one of these machines isn't months, but years, and while Ford does its best to keep up with demand, it's already working on a hardcore Raptor version and numerous special editions, including the Heritage Edition. We recently confirmed that the Heritage Edition was on its way thanks to some leaked dealer documents, and now some more details have been revealed, including info on its styling and upgraded off-road parts.
CARS・13 DAYS AGO
fordauthority.com

The 2021 Ford Bronco, in spite of its many production challenges, is undoubtedly a smash hit with buyers, who waited a full quarter-century for the iconic off-roader to return. It will be a while before Ford is able to fill all of its Ford Bronco orders, but in the meantime, the rugged SUV has made the cut as a finalist for a very distinctive honor – 2022 North American Utility Vehicle of the Year, joining the 2022 Ford Maverick, which is a finalist for 2022 North American Truck of the Year.
BUYING CARS・8 DAYS AGO

Production Of The 2022 Ford Bronco Now Has A Start Date

The Ford Bronco seems to be making headlines on a daily basis, sometimes for good reasons such as the debut of the hardcore Bronco DR, and sometimes for the not-so-good reasons such as the fact that the waiting list is insanely long. It feels as though the Ford Bronco has just arrived, but Ford is already making plans for a refreshed model and orders have opened for the 2022 model year. A few weeks ago, we reported that Ford had stopped taking reservations of the 2021 model, with the company directing buyers to the 2022 model, and now we have a production date for the 2022 car: 15 December 2021.
CARS・9 DAYS AGO
Gear Patrol

The Ford Bronco's Impact on America Can't Be Overstated

On the evening of June 17, 1994, a white Ford Bronco became the world’s most famous SUV. A gun-toting O.J. Simpson had slipped into the back of friend Al Cowling’s 1993 Bronco, and the former football great — charged in the murder of ex-wife Nicole Brown Simpson and her friend Ronald Goldman four nights earlier— led Los Angeles police on an extensively televised two-hour chase before surrendering at his Brentwood mansion. “The Juice” and the Bronco were forever linked. But only the Bronco got put away for 25 years.
FOOTBALL・11 DAYS AGO
Autoblog

Quadratec, one of the world's best-known manufacturers of aftermarket parts for Jeep vehicles, is turning its attention to the born-again Ford Bronco. It announced a new division named Stallion 4x4 that aims to provide enthusiasts with a trove of Bronco-related resources and parts. While the company hasn't published its first...
CARS・5 DAYS AGO
MotorBiscuit

The New 2022 Ford Bronco vs. The Original 1966 Ford Bronco: A Classic Car Comparison

The Bronco name was recently revived, and so far the reimagined SUV has been well received. Unlike the Ford Maverick, which went from a two-door coupe to a pickup truck, Ford stuck with the two-door SUV look of the original Bronco. Then they added a four-door SUV option for anyone who wanted it. But how does the new 2022 Ford Bronco compare to the original 1966 Ford Bronco?
CARS・11 DAYS AGO
CarBuzz.com

The Ford Ranger Raptor is one of the most hotly-anticipated vehicles of 2022, and we can't wait to see what this all-new machine will be like. For months, we've been scraping together little tidbits of information as we try to piece together what the new truck will offer. Both it and its regular counterpart are set to be revealed soon, but in the meantime, development continues. If you're building a pickup that is meant to be an off-road badass, you want to test it in some harsh environments, and environments don't get much harsher than those in Australia. The new Ranger Raptor has now been spotted testing there, and it looks angry.
CARS・12 DAYS AGO
CarBuzz.com

Do your neighbors complain about your SUV not being green enough as they drive slowly by in their new EV?. Well, have we got a solution for you - chia sprouts. These sprouts are commonly used in Chia Pets as a replacement for fur or hair. The teams at Quake LED and DS18 Sound simply decided to do it on a larger scale, using a vehicle as the foundation for this living garden. It's what DS18 calls one of their Freak Show uilds.
CARS・5 DAYS AGO
Roanoke Times