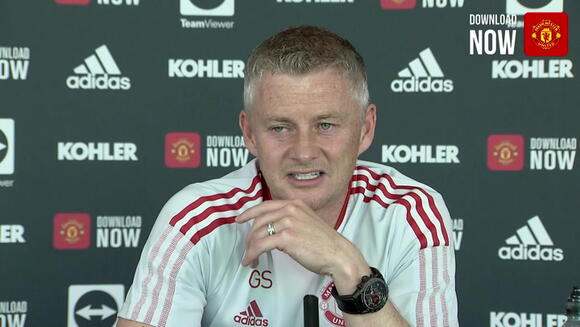 Leicester City achieved a statement Premier League victory over Manchester United on Saturday, emerging from a wild game at the King Power Stadium as 4-2 winners.

United face a tough run of fixtures in the coming weeks and this was a nightmare start for Ole Gunnar Solskjaer’s side. The Red Devils did in fact begin well against the Foxes here, with Mason Greenwood slamming a finish past Kasper Schmeichel, off the post and in to give United the lead in the first half. But Leicester soon hit back as Youri Tielemans clipped the deftest of finishes into the top corner of the visitors’ net.

As such, the score was 1-1 at the break, but Caglar Soyuncu put the hosts ahead as the final whistle neared, stabbing home the ball in the aftermath of a Leicester corner. United found the perfect response through returning substitute Marcus Rashford, who smashed a strike past Schmeichel to equalise seconds after Soyuncu’s goal, but Solskjaer’s side at once got a taste of their own medicine. Jamie Vardy slashed a half-volley past David de Gea to restore Leicester’s lead, immediately after Rashford’s goal, before Patson Daka finished United off in injury time.

Follow all the fallout from United’s defeat at Leicester, plus live updates from Brentford vs Chelsea:

Michael Carrick takes charge of Manchester United for the first time after Ole Gunnar Solskjaer’s sacking on Sunday. The Red Devils find themselves in a desperate situation, having been thrashed by Watford at Vicarage Road, leaving them 12 points off leaders Chelsea in the Premier League and six points off fourth.FOLLOW LIVE: Team news and latest updates as Man United face Villarreal in Champions LeagueTheir position in the Champions League is far from comfortable either, and this game will go a long way to deciding who will top Group F and who will qualify, with United already holding a victory...
PREMIER LEAGUE・13 DAYS AGO
Absolute Chelsea

Chelsea vs Manchester United: How to Watch/Live Stream | Premier League

Chelsea host Manchester United in the Premier League at Stamford Bridge on Sunday afternoon. Thomas Tuchel's side face the Red Devils who are currently managed by Michael Carrick following the departure of Ole Gunnar Solskjaer. Both picked up wins in midweek in the Champions League prior to the league meeting...
PREMIER LEAGUE・11 DAYS AGO
Absolute Chelsea

Chelsea host Manchester United in the Premier League on Sunday afternoon at Stamford Bridge. Thomas Tuchel's side remain unbeaten in their last ten in all competitions as they sit top of the Premier League table. Here is the all-important team news from west London ahead of the clash:. Chelsea XI...
PREMIER LEAGUE・8 DAYS AGO
SB Nation

Tears were shed across the planet as Manchester United announced Ole Gunnar Solskjaer’s exit from Old Trafford following a 4-1 loss to then 17th-place Watford. Until United finds a new interim manager — which apparently will be Ralf Rangnick, also known as a “father figure” to German coaches such as Jürgen Klopp and our own Thomas Tuchel —, they will have former midfielder Michael Carrick at helm.
PREMIER LEAGUE・10 DAYS AGO

Manchester United will be happy to take a point from Stamford Bridge after riding out an overwhelmed start and drawing Premier League-leading Chelsea 1-1 on Sunday. David De Gea made five saves in the draw and Jadon Sancho scored off a Jorginho error, as proper intensity returned to this long-held rivalry.
PREMIER LEAGUE・8 DAYS AGO
The Independent

Mauricio Pochettino should quit Paris Saint-Germain “tomorrow” to take up the managerial vacancy at Manchester United, former Liverpool defender Jamie Carragher has said. Pochettino’s side were beaten 2-1 by Manchester City at the Etihad in the Champions League on Wednesday as speculation swirled around whether the former Tottenham boss would be prepared to leave PSG mid-season. The Argentine said on Tuesday that he is “happy” at the French club, who he joined in January 2021, but it understood that he is ready to quit PSG to join United before the summer, following the sacking of Ole Gunnar Solskjaer. PSG were...
PREMIER LEAGUE・12 DAYS AGO
The Independent

Is Chelsea vs Manchester United on TV today? Kick-off time, channel and how to watch Premier League fixture

Chelsea take on Manchester United in this afternoon’s headline Premier League fixture.The Blues will look to extend their excellent recent form, while the Red Devils continue to regroup after the sacking of Ole Gunnar Solskjaer.Michael Carrick is in charge for the time being, but this will be his final game in charge as interim boss, with Ralf Rangnick striking an agreement to take charge for the remainder of the season.FOLLOW LIVE Chelsea vs Manchester United build-up, team news, score and goal updatesThomas Tuchel’s side come into the contest approaching their best form after easily beating Juventus midweek and a win...
PREMIER LEAGUE・8 DAYS AGO
90min.com

Arsenal travel to Manchester United on Thursday night, as a classic Premier League contest takes place at Old Trafford. The Gunners can go into the fixture in high spirits, currently occupying fifth spot and sitting level on points with West Ham in fourth. Their position is due to a hugely encouraging run of form since opening their campaign in woeful form. Since losing their opening three Premier League games, Mikel Arteta's men have only been defeated by Liverpool in their subsequent ten outings, winning seven - most recently seeing off Newcastle with a comfortable 2-0 victory.
PREMIER LEAGUE・5 DAYS AGO

It’s Manchester United vs. Arsenal in a Thursday afternoon English Premier League matchup. Cristiano Ronaldo and Manchester United will be looking to get back on track and out of the midfield of the EPL standings. The club currently sits at 5-3-5 in the standings and has gone 0-1-2 in their last three EPL matches. Along with Ronaldo, Bruno Fernandes, Mason Greenwood and Paul Pogba have led the way offensively. On the other side, Arsenal has been on a roll, moving up to fifth place in the EPL with a record of 7-2-4. Emile Smith Rowe and Pierre-Emerick Aubameyang are the club’s leading scorers.
PREMIER LEAGUE・4 DAYS AGO
NBC Sports

Manchester United vs Arsenal: The Red Devils battled back from an early deficit, led by two goals from Cristiano Ronaldo and another from Bruno Fernandes, for a 3-2 win over the Gunners at Old Trafford on Thursday. Ronaldo’s first goal took his career tally (club and international) to 800. He...
PREMIER LEAGUE・4 DAYS AGO
The Independent

Manchester United interim manager Ralf Rangnick will make his first appearance on the touchline at Old Trafford today with the visit of Crystal Palace.After watching the 3-2 win over Arsenal in the stands, Rangnick was unveiled on Friday and said he was looking to instill more "balance" to a team prone to conceding goals.That aim will get a stern first test from Crystal Palace, who have been a strong attacking unit with Conor Gallagher particularly impressing so far this season. FOLLOW LIVE - Manchester United vs Crystal Palace: Team news, line-ups and build-up for Premier League fixture todayUnited came...
PREMIER LEAGUE・1 DAY AGO
The Independent

Manchester United manager Ralf Rangnick has said he is “more than happy” with the way in which his new team took the game to Crystal Palace on Sunday (5 December) with a 1-0 win. Rangick seemed particularly happy with the first half an hour of the game but said he...
PREMIER LEAGUE・23 HOURS AGO

Manchester United defeated Crystal Palace 1-0 at Old Trafford as Fred scored a late winner in interim manager Ralf Rangnick’s first game in charge. The Brazilian produced a wonderful first-time finish from the angle in the 77th minute to earn United back-to-back wins in the Premier League following their 3-2 victory over Arsenal on Thursday. United were bright in the first half but were frustrated by a disciplined Crystal Palace side and were unable to create any clear chances to reward their positive play. Palace were the better side for spells in the second half and had a glorious...
PREMIER LEAGUE・1 DAY AGO
CBS Sports

The Ralf Rangnick interregnum at Manchester United began in ideal fashion Sunday, a stunning late strike by Fred earning the interim manager victory over Crystal Palace in his first match in charge at Old Trafford. With 76 minutes on the clock, Rangnick seemed destined for a frustrating start to life...
PREMIER LEAGUE・1 DAY AGO
The Independent

Ralf Rangnick says the manner of Manchester United’s performance surpassed his expectations as the interim manager’s reign began with victory against Crystal Palace.The 63-year-old watched Thursday’s frantic 3-2 win against Arsenal from the directors’ box at Old Trafford, where he was on the sidelines for the first time on Sunday as Patrick Vieira’s men came to the north west.Rangnick had precious little time to work with the players given the swift turnaround, but United played on the front foot from the outset with impressive intensity and energy.Their performance petered off after that breathless opening 30 minutes but Fred stepped...
PREMIER LEAGUE・1 DAY AGO
The Guardian

As Barcelona and Spanish champions Atletico Madrid scrap for a place in the Champions League last 16 this week, the Premier League's four participants can take it easy knowing their places in the knockout stages are already guaranteed. This week financially stricken Barca, Atletico, Sevilla and Villarreal are all in serious peril of bowing out at the group stage of the Champions League.
PREMIER LEAGUE・5 HOURS AGO
The Independent

Everton manager Rafael Benitez is trusting in his vast experience to arrest his side’s worrying slide but he has warned fans the pain could last until the new year.No win in eight Premier League matches has ramped up the pressure on the former Liverpool boss with supporters turning their anger on the board and director of football Marcel Brands after the midweek Merseyside derby defeat at home.Heading into a month which includes fixtures against Arsenal, on Monday, Chelsea and Leicester plus a trip to Burnley – and with main striker Dominic Calvert-Lewin unlikely to return from a thigh injury for...
PREMIER LEAGUE・1 DAY AGO