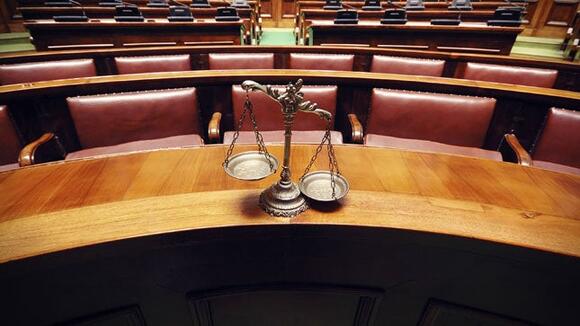 A man who serves as an assistant to the House of Representatives sergeant-at-arms was arrested this week and charged with 10 counts of possession of child pornography.

Stefan Bieret, 41, was arrested and charged with the felonies after Fairfax County detectives said they discovered multiple electronics while searching his home, according to a local Fox News station.

Bieret became the subject of an investigation after the National Center for Missing and Exploited Children alerted law enforcement that an illicit image was found uploaded from a Dropbox account, police said. Authorities say the account was determined to belong to Bieret after multiple searches, the news outlet noted.

Upon his arrest, Bieret was taken to Fairfax County Adult Detention Center, where he was reportedly held without bond.

Detectives told Fox News that they will continue to analyze the evidence recovered from Bieret's home and work with the Office of the Fairfax Commonwealth’s Attorney to determine any additional charges.

awsome ! that's who's siiting in these courts now ! see why al these l criminals go free now no bail even / and they have no problem paroleing killers too !

Pretty cool to understand you could borrow a Republicans laptop for a minute. Upload a pic to their hard drive and they are arrested and held without bond. Hmmmm Seminars with training anyone ?

The former assistant superintendent of Grand Haven Area Public Schools has been arrested and charged for embezzling more than $100,000 from the school district. Late Tuesday afternoon, police issued an arrest warrant for Brian Wheeler, 56, and said he may have fled the area in one of two vehicles: a 2013 Buick Enclave or a 2005 motorhome. They said he had been the subject of a police investigation for embezzlement reported by the school district's senior staff.
GRAND HAVEN, MI・12 DAYS AGO
cbslocal.com

Sergeant Arrested For Battery On An Inmate

PINELLAS COUNTY, Fla. (CW44 News At 10)– A Pinellas County Sheriff’s Office sergeant, assigned to the Department of Detention and Corrections, was arrested for battery and official misconduct. The incident occurred at the Pinellas County Jail located at 14400 49th Street North on November 19, 2021. According to detectives, 41-year-old...
PINELLAS COUNTY, FL・5 DAYS AGO
News 8 WROC

Authorities say the Yates County District Attorney, Todd Casella, was brought in as a special prosecutor for this case.
WATKINS GLEN, NY・2 DAYS AGO
Newsweek

Young Girl Who Was Sold to 'Old Man' for $2,200 in Afghanistan Rescued and Relocated

Parwana Malik was sold by her father in October after he couldn't afford food for the rest of the family.
FOOD & DRINKS・2 DAYS AGO

A Charlie's Angels-style gang of glamorous Brazilian drug couriers who delivered narcotics across London on mopeds have been jailed after police dismantled their operation. Controlled and recruited by the only man in the organisation, the female gang members supplied drugs on a vast scale, making almost £100,000 profit every month.
PUBLIC SAFETY・13 DAYS AGO
People

Family Members Say Woman Was 'Beaten to Death' in Cancún, Allege Boyfriend Had Been Violent Before

Family members of a Washington woman killed in Mexico last week are sharing details about her killing and the now-arrested boyfriend she was traveling with. Sativa Transue, 26, was on her second day of vacation in Cancún, Mexico, when she began sending her loved ones concerning messages. "[On Friday] she...
PUBLIC SAFETY・2 DAYS AGO
NBC News

A FedEx driver who dumped nearly 400 packages of various sizes into an Alabama ravine did so on at least six occasions, the Blount County Sheriff’s Office said. “Update on the FedEx dump. Investigators have determined that the driver dumped at least six times making FedEx a victim of six different Theft of Property cases,” Sheriff Mark Moon wrote on the office’s Facebook page Tuesday.
BLOUNT COUNTY, AL・4 DAYS AGO
iHeartRadio

The nurse realized his arm was fake before she gave him the vaccine.
PUBLIC HEALTH・1 DAY AGO

Brian Laundrie's parents are putting a hoax to rest after a sign was placed on their property Tuesday. According to the family's lawyer, Steven Bertolino, the for sale sign placed in front of their property is nothing but a hoax placed there by a third party. "It was either photoshop...
PUBLIC SAFETY・2 DAYS AGO
MarketWatch

This week on True Crime Daily The Podcast: A librarian in Florida is accused of bumping a motorcyclist in traffic in a road-rage incident. The pregnant woman is followed home by the rider and other witnesses before she's shot dead in the street after reportedly getting a gun from her house (2:13). No one is charged in the case.
PUBLIC SAFETY・2 DAYS AGO
Business Insider

Brandon Fellows submitted several filings in which he lashed out against his previous counsel and admitted to committing obstruction.
POLITICS・3 DAYS AGO
michiganchronicle.com

Michigan School Gunman Wanted To ‘Murder As Many As Possible’

New disturbing evidence has emerged about the accused gunman in the Michigan school shooting that took place Tuesday (November 30). According to reports, 15-year-old Ethan Crumbley went to Oxford High School with the intention to “murder as many as possible,” as written in a journal entry and recorded cellphone video police found in his backpack.
MICHIGAN STATE・2 DAYS AGO
Pennsylvania Capital-Star

By Victoria Ebner When Naiymah Sanchez remembers the people she looked up to as a young woman in the Philadelphia community, the names that come to mind are those of the trans women she met at her local community center. “As a young trans person, we didn’t have this representation, so coming out into the […] The post Philly cops, prosecutors’ probes of death of Black transgender woman reveals flaws in state law appeared first on Pennsylvania Capital-Star.
PHILADELPHIA, PA・2 DAYS AGO
Shropshire Star

WATCH: Killer caught on CCTV laughing with friend before stabbing him

A killer and the friend he murdered were captured on film laughing together shortly before he stabbed him to death with a large 'Rambo'-style knife. Sean Bulle was arrested in Shrewsbury two days after he stabbed Paulius Petrasiunas, 25, outside a flat when he became irritated with him following a drug deal.
PUBLIC SAFETY・2 DAYS AGO
The Independent

The trial of British socialite Ghislaine Maxwell has adjourned for the weekend in New York City. The59-year-old is answering to charges related to her alleged involvement in financier Jeffrey Epstein’s sex crimes. Rounding out a week of testimony, on Friday, jurors were shown video footage of the inside of the Palm Beach house at the centre of the allegations. Epstein’s massage table, where much of the abuse is alleged to have occurred, was brought into the courtroom.His former housekeeper, Juan Alessi, testified in detail on Thursday afternoon about his duties at the Palm Beach mansion, what he saw happen there,...
PUBLIC SAFETY・1 DAY AGO
BBC

Ex-nurse gets 10 years in prison for raping incapacitated patient

An Arizona man has been sentenced to 10 years in prison for sexually assaulting an incapacitated woman who gave birth at a clinic where she was under his care. Ex-nurse Nathan Sutherland was accused of raping the victim, who has severe disabilities, at the Hacienda HealthCare facility in Phoenix. He...
PUBLIC SAFETY・2 DAYS AGO
The Independent

Judge rules teenager, 16, who stabbed father-of-four to death can be named

A teenage boy who stabbed a father-of-four to death on the day of his twin daughters’ second birthday party can now be named after a ruling by a High Court judge.Joshuah Sparks, 16, stabbed James Gibbons four times after the 34-year-old challenged a group of youths who were harassing a homeless man, Chelmsford Crown Court heard.The boy claimed it was self-defence but was found guilty of murder following an earlier trial.Although Sparks was entitled to automatic anonymity, Mr Justice Charles Bourne, sitting at Chelmsford ruled at his sentencing hearing on Friday he could be named.Mr Gibbons was yards from his home in Iris Mews in Laindon, Essex when he was knifed to death on May 2.The sentencing hearing continues.
PUBLIC SAFETY・2 DAYS AGO
ABC 7 Chicago

A southwest suburban couple admitted that they scaled a wall and squeezed through a broken window at the U.S. Capitol during the Jan. 6 rioting in Washington, DC.
CREST HILL, IL・2 DAYS AGO