By Eleanor Sly,Graeme Massie,Graig Graziosi and Stuti Mishra
The Independent
2021-10-16 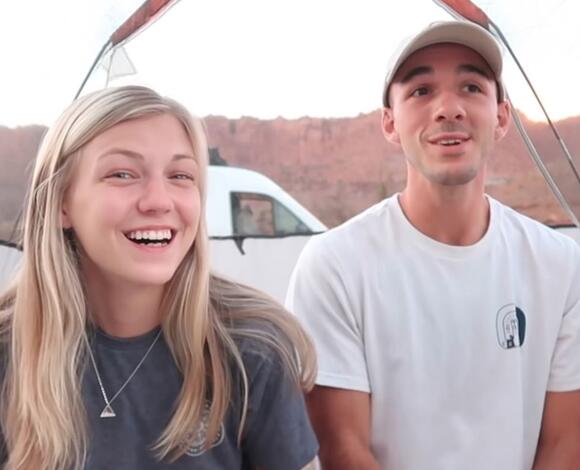 As the search for Brian Laundrie enters its 30th day, a long-time friend has said that it is possible that he had the resources to leave the US illegally.

The friend, who knew Mr Laundrie from a young age, told The Sun that Brian was a good planner who could execute his plans precisely.

“I think he’d be able to put the resources together to get out of the country, either illegally or under some sort of fake identification,” the friend said.

Meanwhile, North Port Police reported that they found no new evidence of Mr Laundrie’s location in the Carlton Reserve on Friday. Police and FBI have been searching the 25,000-acre nature preserve – where Mr Laundrie was reportedly hiking alone – since 17 September and have employed the use of a human remains-detecting dog in their efforts.

Authorities have previously said there is believed to be a 50 per cent chance that Mr Laundrie is still alive.

this fool is on some island living the life where there is no extradition. What they should do is put his parents in jail for hiding him...which is very obvious. They get out when he turns himself in. When the parents get out, they have to pay back ALL of the money it cost for the searches.

I've said it from the beginning that he ain't hanging around long. He came home for a week to do away with his storage unit..... $$$ in his pocket or he started planning because I think he murdered her before he came home. Then he flew back to Utah, where his original flight left, had the van parked there, went back to where he left her body, that's when someone photographed the van AND saw a man nearby acting strange. He then started his journey back to Florida, pocketing money and buying things that caught the eyes of the detectives and FBI and he probably pocketed some of the money to help with his escape. I can't believe law enforcement hasn't INTERROGATED, not a casual conversation,his mom, dad, and sister.

there's no doubt that he's still alive and I believe his whole family is in on it because they act mighty guilty to me. his parents have to be helping him stay on the run

The mystery of Gabby Petito’s death got one step closer to resolution Tuesday with the release of autopsy results finding that her late fiancée, Brian Laundrie, died from a self-inflicted gunshot wound. Laundrie had been a person of interest in Petito’s disappearance and death. But some law enforcement officers still...
PUBLIC SAFETY・9 DAYS AGO
The Independent

The body went unnoticed for a year. Now a father claims it was justice for his trafficked daughter: What happened to Andrew Sorensen?

The abandoned car had been parked near Dane Massie’s home in Northeast Spokane, Washington, for about four days when he and his friend decided to go check it out, hoping to learn why his dogs kept running over to it.As they approached, the men were met by an overwhelming stench.“It smelled like death,” Mr Massie told local news station KXLY.They traced the odour to a body crammed in the trunk of the Honda Accord.The body was identified as 19-year-old Andrew Sorensen, who police say had been left to rot in the car for nearly a year before Mr Massie’s discovery...
PUBLIC SAFETY・27 DAYS AGO
Popculture

Brian Laundrie's parents are putting a hoax to rest after a sign was placed on their property Tuesday. According to the family's lawyer, Steven Bertolino, the for sale sign placed in front of their property is nothing but a hoax placed there by a third party. "It was either photoshop...
PUBLIC SAFETY・9 HOURS AGO
hngn.com

Brian Laundrie's parents have put up their Florida home for sale and seem to be looking to move away weeks after the discovery of their son's remains were found in an alleged suicide case. The couple has put up "for sale" signs in the front yard of their North Port,...
NORTH PORT, FL・2 DAYS AGO

Brian Laundrie, the 23-year-old former fiancé and only person of interest in the death of late influencer Gabby Petito, died by suicide, the attorney for the Laundrie family confirmed Tuesday. "Chris and Roberta are still mourning the loss of their son and are hopeful that these findings bring closure to...
PUBLIC SAFETY・9 DAYS AGO
The Independent

The boyfriend of a woman from Washington, who was found dead in her Cancun hotel room, has been arrested for her murder. Sativa Transue, 26, and her boyfriend Taylor Allen, 31, were vacationing for the Thanksgiving holiday in Cancun, Mexico.A hotel worker found her inside her room on 27 November and called 911 to report an unconscious woman. According to the Mexican police, Transue was killed the previous night, on 26 November. Her boyfriend had been drinking and allegedly beat her to death, reported Law & Crime. The motive has not yet been ascertained.Her mother, Jayme Bolieu, said her...
PUBLIC SAFETY・22 HOURS AGO
enstarz.com

Brian Laundrie's Parents Guilty? Chris, Roberta Might Face Legal Charges If THIS Would Be Proven True

Brian Laundrie's parents might soon face charges as the investigation into what happened from the day Gabby Petito died until the authorities found skeletal human remains in the Carlton Reserve. The public is yet to hear another update about Laundrie's case. Still, people insist that Chris and Roberta might be...
PUBLIC SAFETY・10 DAYS AGO
Insider

"I have no reason to believe any charges will be filed against Chris and Roberta Laundrie with respect to this case," attorney Steven Bertolino said.
PUBLIC SAFETY・8 DAYS AGO

Gabby Petito’s family: ‘Additional individuals’ could be charged in her death

The lawyer for Gabby Petito’s family suggested there may soon be charges filed against “additional individuals” after authorities confirmed Brian Laundrie, her fiancé and the lone person of interest in her strangulation slaying, died by suicide. Attorney Richard Stafford floated the possibility in a press release late Tuesday, which also...
PUBLIC SAFETY・7 DAYS AGO
Insider

Brian Laundrie, the sole person of interest in the killing of his fiancée, Gabby Petito, died by suicide, a Florida medical examiner said.
PUBLIC SAFETY・9 DAYS AGO
abc11.com

NEW YORK -- Brian Laundrie, whose remains were found in a Florida preserve more than a month after the death of his fiancée Gabby Petito, died of a self-inflicted gunshot wound to the head, family attorney Steve Bertolino said Tuesday. The cause of death came from an anthropologist who received...
PUBLIC SAFETY・9 DAYS AGO
americanmilitarynews.com

Brian Laundrie, who made headlines as a person of interest in the disappearance of his fiancée Gabby Petito, died of gunshot wound to the head, according to a statement from the Laundrie family attorney Steven Bertolino. Autopsy results confirm the manner of death is suicide, Brian Entin, a reporter for...
PUBLIC SAFETY・9 DAYS AGO
The Independent

The results of an autopsy on Brian Laundrie’s body will be announced in the following 48 hours, a lawyer for his family has said.Steve Bertolino, an attorney for the Laundrie family, told News 4 New York of the news on Tuesday.He said that the results of an autopsy on the body of the 23-year-old would be released “today” or “tomorrow”.Mr Bertolino previously said an anthropologist would examine Mr Laundrie’s body after an initial autopsy was inconclusive.The autopsy, which was carried out by the Sarasota County medical examiner, failed to fully establish a cause of death.“I was told the...
PUBLIC SAFETY・9 DAYS AGO
E! News

After Brian Laundrie's remains were found in a Florida reserve, new details have come to light about his passing. On Nov. 23, the Laundrie family's attorney confirmed the 23-year-old's cause of death. "Chris and Roberta Laundrie have been informed that the cause of death was a gunshot wound to the...
PUBLIC SAFETY・9 DAYS AGO
BBC

The fiancé of murdered US blogger Gabby Petito, Brian Laundrie, took his own life, his family's lawyer has said in a statement. Mr Laundrie returned from a road trip without his fiancée and her body was later found in Wyoming. Mr Laundrie's body was identified last month using dental records....
PUBLIC SAFETY・9 DAYS AGO
iheart.com

Brian Laundrie 'Had Hallmarks Of An Abuser' Per Gabby Petito's Dad

Gabby Petito's father said her fiancé, Brian Laundrie, had "all the hallmarks of an abusive relationship," but the family didn't see any "red flags" prior to her disappearance. Joe Petito appeared alongside Gabby's mother, Nichole Schmidt and stepmother, Tara Petito, during an episode of Dr. Oz that aired on Tuesday...
RELATIONSHIPS・14 DAYS AGO
International Business Times

Heightened media attention gripped the country in August after the disappearance and death of 22-year-old YouTuber Gabby Petito in Wyoming. At about the time of Petito's disappearance, her fiancee, Brian Laundrie, became a person of interest and an ensuing manhunt followed, ending with his remains discovered in a Florida reserve in October.
CELEBRITIES・13 HOURS AGO
enstarz.com

Gabby Petito's remains had been located for two months now. Her fiancé Brian Laundrie's remains were discovered a month later. Their cases are still open and live, despite the fact that online sleuths believe they have been closed since police and detectives have not provided any updates. Despite the fact...
PUBLIC SAFETY・9 DAYS AGO
enstarz.com

There hasn't been any news on the Brian Laundrie and Gabby Petito case in a long time, and many people are wondering what's going on. Despite the fact that the fugitive's involvement in Gabby Petito's case has been ongoing for more than a month since his remains were discovered in a Florida park, News Nation Now journalist Brian Entin has confirmed that determining the fugitive's role in the investigation is ongoing.
ACCIDENTS・12 DAYS AGO
Fox News

Deceased fugitive Brian Laundrie died of suicide, a forensic anthropologist told Laundrie family attorney Steven Bertolino on Tuesday. Laundrie took his own life with a gunshot wound to the head, Bertolino said. "Chris and Robert are still mourning the loss of their son and are hopeful that these findings bring...
NORTH PORT, FL・9 DAYS AGO