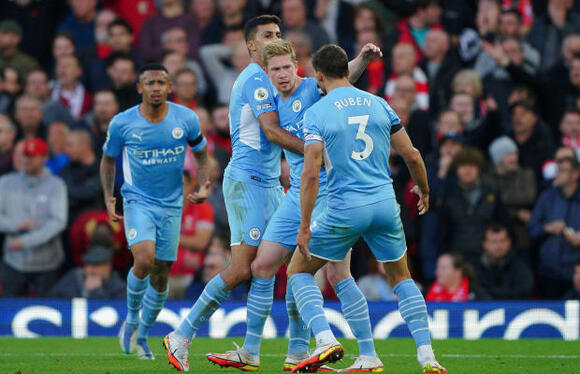 Pep Guardiola’s men came through a difficult three-game period right before the international break, with the defending champions securing four crucial points against title favourites Chelsea and Liverpool in the space of nine days.

Manchester City, who sit third in the Premier League table with a two-point difference after seven games, will be aiming to pick up where they left off before the international break when they face Sean Dyche’s men at the Etihad Stadium on Saturday.

Meanwhile, Burnley are currently struggling to find their foot having secured only three points from as many draws in seven games so far this season and currently sit 18th in the table.

Here is how you can watch Manchester City’s game on October 16!

Saturday’s match will be not broadcast live in the United Kingdom. For those who wish to follow the game via audio channels, BBC Radio Manchester will provide radio coverage of the match.

Highlights will be available on City’s official website and app from 19:00 and you can watch a full-match replay on CITY+ from midnight after the game.

beIN Sports Premium 2 and beIN SPORTS CONNECT will provide coverage of the game for viewers in the United Arab Emirates.

The We're Not Really Here show will also provide all the build-up, half-time and post-match analysis on the game.

Manchester City manager Pep Guardiola has all but ruled out ever taking charge of another club in England The Spaniard is contracted at the Etihad Stadium until 2023 and could extend that, but expects to work elsewhere at some point in the future.Although he has expressed an interest in international football, the 50-year-old admits he has no clear vision of where his long-term future lies.I don't think I am going to train another club in England. I'm a part of this club.Pep GuardiolaOne thing he is sure about, however, is that he cannot see himself being employed by another Premier...
PREMIER LEAGUE・1 DAY AGO
CityXtra

It is now two goals in his last two appearances for Raheem Sterling, with the winger looking to fight his way back into Pep Guardiola's first-team plans, after weeks of relative uncertainty. Sterling's goal against Everton on Sunday afternoon was typical of the 26-year-old's lightning pace. Of course, Joao Cancelo's...
PREMIER LEAGUE・6 DAYS AGO
The Guardian

Burnley puts its three-match unbeaten run on the line and bids to get out of the relegation zone when it tangles with a very strong Crystal Palace at Turf Moor on Saturday (start time 10am ET online via Peacock Premium). The 18th-place Clarets have drawn Southampton and Chelsea with a...
PREMIER LEAGUE・11 DAYS AGO

Ederson - 7 Probably proper bored, and cold too. Moved the ball well, as per, but didn't have much else to do. Caught one or two balls. He did that well. Attacked very well and used his pace with good purpose, which for me isn't always the case. A couple of very dangerous balls in from the right hand side but not every opportunity to create a good chance was taken.
MANCHESTER, NY・7 DAYS AGO
houstonmirror.com

Two teams that endured contrasting fortunes in the English Premier League are all set to go head to head on Sunday in EPL. Manchester City went to the international break with a win against Manchester United. Ahead of the Manchester City vs Everton fixture, here is our preview, prediction and live streaming details.
PREMIER LEAGUE・10 DAYS AGO
NJ.com

Leicester City, led by striker Jamie Vardy, faces Chelsea in an English Premier League match on Saturday, November 20, 2021 (11/20/21) at King Power Stadium in Leicester, England. Fans without cable can watch the match for free via a trial of fuboTV. Here’s what you need to know:. What: English...
PREMIER LEAGUE・9 DAYS AGO

Burnley v Crystal Palace live stream: How to watch the Premier League from anywhere in the world

Burnley v Crystal Palace live stream, Saturday 20 November, 3pm GMT. Burnley and Crystal Palace will be hoping to extend their respective unbeaten runs when they go head-to-head on Saturday afternoon. Sean Dyche’s side failed to win any of their first nine matches this season, before bringing that barren stretch...
PREMIER LEAGUE・9 DAYS AGO
CityXtra

City cut the gap to the top of the pile to three points with a convincing win over the Toffees in the Premier League, with goals from Raheem Sterling, Rodri and Bernardo Silva sealing the points for Pep Guardiola's side. Rodri has been widely praised for his role in Manchester...
PREMIER LEAGUE・7 DAYS AGO
CityXtra

The final international break of 2021 is officially over, and for four months it's purely club football. The famously hectic winter schedule is now upon us, and it's normally the time we find out who the real contenders are for the Premier League crown. Pep Guardiola will be hoping his...
PREMIER LEAGUE・8 DAYS AGO
CityXtra

It will come as a surprise to no one that Manchester City have received a flurry of nominations for another major awards ceremony. After eight players were nominated for the 2021 Ballon d'Or, a further four have been nominated for this year's Best FIFA Football Awards. The ceremony will take...
PREMIER LEAGUE・6 DAYS AGO

The Premier League champions reduced the gap at the top of the top-flight table to just three points, with a convincing victory over Rafael Benitez's Everton side at the Etihad Stadium. Goals from Raheem Sterling, Rodri and Bernardo Silva ensured all three points for the hosts, who now face a...
PREMIER LEAGUE・7 DAYS AGO
CityXtra

The Premier League champions brushed Everton aside to continue their impressive record over the Toffees and keep in touch with league leaders Chelsea. A superb Raheem Sterling goal was the catalyst, with Rodri scoring a screamer to end Everton's fightback hopes before Bernardo Silva wrapped it up late on. There...
MANCHESTER, NY・7 DAYS AGO
CityXtra

In European football this season, there have not been many players who have rivalled Manchester City's Joao Cancelo for contributions at both ends of the pitch. The Portugal international has been in excellent form in the left-back role for Manchester City, establishing himself as one of the Premier League's most creative talents.
PREMIER LEAGUE・7 DAYS AGO
The Independent

Manchester City host Everton this weekend with the two teams in contrasting form before the international break.Pep Guardiola’s team are second in the Premier League table after their all-too-comfortable win in the local derby against United, while the Toffees are down in 11th after going five without a win.Both sides are without a number of players to injuries, suspensions and other absences, but the expectation will be on City’s greater squad depth to still see them earn a positive result.LIVE: Follow live coverage of Man City vs EvertonRafael Benitez’s team have only won once away from home in the league this...
PREMIER LEAGUE・8 DAYS AGO
CityXtra

22 year-old Pedro Porro is certainly enjoying life in Portugal. The right-back joined the Portuguese giants on a two-year loan deal from Manchester City in the summer of 2020 and has since gone on to make 52 appearances, scoring six goals and providing four assists. Manchester City originally paid around...
PREMIER LEAGUE・7 DAYS AGO
CityXtra

Last summer, Pep Guardiola had publicly revealed that Bernardo Silva was one of a handful of Manchester City players who had expressed a wish to leave the club due to a variety of reasons including an unhappiness with life in the North-West city. A move, however, failed to materialise, in...
PREMIER LEAGUE・7 DAYS AGO
CityXtra

The Ligue 1 giants are expected to make the trip to the North-West of England on Tuesday afternoon, ahead of a decisive match at the top of Champions League Group A on Wednesday night. Manchester City will secure a place in the knock-out stage of Europe's premier competition once again,...
PREMIER LEAGUE・6 DAYS AGO
CityXtra

Manchester City suffered their first ever loss to PSG in September, as a clinical Paris side beat the Blues 2-0 at the Parc des Princes courtesy of goals from Idrissa Gueye and Lionel Messi. The Blues are on the cusp of securing qualification for the knock-out stages of the competition,...
UEFA・7 DAYS AGO