Kyle Coetzer believes Scotland possess the strongest squad that the country has ever assembled at a Twenty20 World Cup.

Scotland start their campaign against Bangladesh in Muscat on Sunday with Oman and Papua New Guinea completing the Group B line-up.

Holland, Ireland, Namibia and Sri Lanka make up Group A and the top two from each section will advance to the Super 12 stage.

Scotland captain Coetzer said: “Your team evolves over the years, especially learning from your environment and the challenges we face going through qualifying tournaments.

“It really brings your group of players together.

“Trying to pick the squad was an absolute nightmare and I genuinely believe this is as strong and as powerful a squad as we’ve selected.

“We feel confident with what we have and believe we’re capable of putting in some strong performances.”

Bangladesh are the favourites to win Scotland’s section given their top-level international experience. 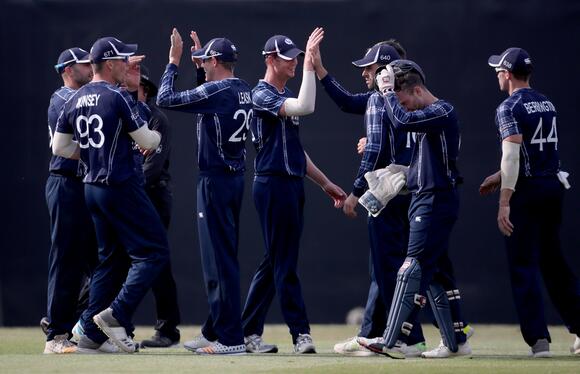 Coetzer said: “We’re diving into the tournament head first really and it’s a real challenge for us.

“But we have beaten them in the past in T20 cricket with a Richie Berrington hundred.

“We understand the dangers there in every game. We have to respect that, but at the same time not fear it.

“We know we have to play well to beat any side in this tournament.”

This is Scotland’s fourth appearance at a T20 World Cup and they have yet to progress past the first round.

Trying to pick the squad was an absolute nightmare and I genuinely believe this is as strong and as powerful a squad as we've selected.

But Scotland did register their first victory at the last edition of the tournament five years ago, beating Hong Kong in India.

“That win was a monkey off our back,” Coetzer said. “We’ve done that now and it’s time to move on and think about the next stage, to push as best we can for the Super 12s.

“We’ve missed opportunities at World Cups to win games of cricket when we probably could have got over the line.

“That’s something we seem to have banished in recent times. We believe we can win games and performing under pressure is a key area for us.”

The past may be a foreign country but it cannot be as brushed aside, as Azeem Rafiq has discovered. Having given harrowing testimony of the racism he has suffered he has been forced to apologise for his anti-Semitic comments made more than a decade ago. Nevertheless, Rafiq’s testimony to the DCMS still stands and struck many chords with me.
SOCIETY・13 DAYS AGO
newschain

Scotland international Siobhan Cattigan has died aged 26, Scottish Rugby has announced. The back row, who won 19 caps for her country, died on Friday, with her club Stirling describing it as a “tragic passing”. A statement from the governing body read: “Scottish Rugby is deeply saddened to hear Scotland...
WORLD・2 DAYS AGO
The Guardian

Weekend football countdown: Get the latest from David Tindall as the 12-team draw for the European qualifying play-offs takes place
PREMIER LEAGUE・7 DAYS AGO
The Independent

Scotland host Japan in their fourth and final Test of the Autumn Nations Series on Saturday. Here, the PA news agency looks at the talking points ahead of the game at Murrayfield. Revenge mission. This is the first meeting between the teams since Scotland were eliminated from the World Cup...
SPORTS・14 DAYS AGO

The following article is about the Super 12 teams that will participate in the ICC Men’s T20 Cricket World Cup 2022. There is no end to the joy for the cricket fans. It has not even been a whole week since the T20 World Cup 2021 ended, but the fans have already recovered from sadness. After having to deal with yet another heartbreak, New Zealand came to India to play T20 and test matches. It has been a rollercoaster ride since the commencement of the tournament, but the rollercoaster side has still not reached its end. Many cricketing tours are being played all over the world to make all the crickets happy in the whole world.
SPORTS・14 DAYS AGO
eturbonews.com

FIFA World Cup Qatar: 10 of the most exciting new hotels

Today marks the one-year countdown to the FIFA World Cup Qatar 2022. Qatar Tourism reveals 10 spectacular new hotels and attractions set to open before the kicks off. WIll COVID take the fun out of the upcoming FIFA World Cup?. Qatar Tourism goes full speed ahead with more than 100...
FIFA・14 DAYS AGO
enplugged.com

Tom’s Guide is supported by its audience. When you purchase through links on our site, we may earn an affiliate commission. Learn more. Here’s how to watch T20 World Cup 2021 online, wherever you are, via a live stream. And so, after 44 games, we know which teams will contest...
SPORTS・14 DAYS AGO
BBC

Dubai [UAE], November 20 (ANI): The United Arab Emirates (UAE) will be looking to make the most of home conditions while drawing inspiration from teams at the recent ICC men's T20 World Cup 2021 as they commence their campaign in the women's T20 World Cup Asia Qualifier against Malaysia on Monday.
WORLD・13 DAYS AGO
The Guardian

If this autumn represented the point in the World Cup cycle when coaches’ thoughts moved firmly towards France 2023, Scotland are stuck between a rock and a hard place. For all the evident progress this year – ending painfully long barren spells at Twickenham and in Paris, a third successive win over Australia – the reality of the next two years is stark.
WORLD・12 DAYS AGO
BBC

The India vs Pakistan match in the recently concluded T20 World Cup saw numerous records tumbled as the Men in Green registered a resounding 10 wicket victory over their arch-rivals. The win broke a streak of World Cup losses to India that spanned decades. Skipper Babar Azam and Mohammed Rizwan were phenomenal as they chased down 152.
SPORTS・8 DAYS AGO
BBC

Scotland's 24-year absence pales in comparison. But both teams are now just two games away from ending that torment and will await Friday's play-off draw with a mixture of excitement and trepidation. Impressive results in their final group games against Belgium and Denmark respectively ensured Wales and Scotland will be...
WORLD・7 DAYS AGO
BBC

Just a trip to Seville on Tuesday to face relentless group leaders Spain, who have four wins from four and a two-point lead over the Scots. The Spaniards put 12 past the Faroes yesterday, and won 6-0 away to Ukraine last month. In total, they have scored 35, and conceded...
SPORTS・8 DAYS AGO
BBC

Scotland will host Ukraine in the play-off semi-final for the 2022 World Cup, while Wales have been drawn at home to Austria. If Scotland and Wales win their matches, they will face each other in Cardiff in a final for a spot in Qatar. Wales are bidding to reach their...
WORLD・7 DAYS AGO
LFCTransferRoom

The draw for the 2022 World Cup play-off matches featuring european teams has taken place and it has thrown up some fascinating scenarios. Wales will face Austria in the semi-final and will have home advantage in the final against the winners of Scotland and Ukraine. That could mean Wales play...
SOCCER・7 DAYS AGO
The Independent

Scotland manager Steve Clarke claimed his players were confident of taking on “anyone, anywhere” after discovering their path to the World Cup will need to veer away from Hampden. Scotland will host Ukraine in the play-off semi-finals on 24 March, having already booked their place among the seeds after winning...
SPORTS・6 DAYS AGO
SkySports

Betfair Chase: A Plus Tard team excited and confident ahead of Gold Cup second's return at Haydock

Cheveley Park Stud director Richard Thompson is excited to see last season's Cheltenham Gold Cup runner-up A Plus Tard make his return to action in the Betfair Chase at Haydock on Saturday. A Grade One winner over two miles a couple of years ago, the seven-year-old successfully stepped up to...
WORLD・14 DAYS AGO