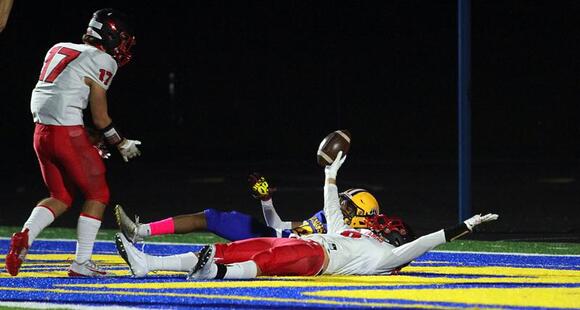 The Cavaliers aren't at their best, but still win easily on the road in the MHC.

The Clackamas football team was not at its best Friday, Oct. 15.

The Cavaliers were admittedly "sloppy," turned the ball over three times and didn't score in the second half.

But it's a measure of just how good the 2021 Clackamas football team is — the Cavaliers are fifth in the latest Class 6A coaches poll and ninth in the OSAA power rankings — that Clackamas still won 28-0 over Barlow at Barlow High School and was never threatened.

"It was sloppy," said Clackamas senior wide receiver Miles Williams, who finished with four catches for 115 yards and two touchdowns. "We have great play calling, great plays, great playmakers and great blocking. We have all the assets to make those big plays. We just have to execute, not get complacent and stay on top of it."

"Coach (James Holan) does a great job of getting us prepared every week," said junior defensive back Nathan Crouchley, who picked off a Barlow pass on Friday and helped keep the Bruins without a completion in the game. "We just need to come to practice with the same mindset, try to get better every day and we'll be where we want to be."

With the win — the Cavaliers' sixth straight on the field and eighth straight overall (they've also taken two forfeit victories) — Clackamas improved to 6-0 in Mt. Hood Conference play and 8-0 overall. Barlow, meanwhile, lost for the second straight time and fell to 3-4 in MHC play and 4-4 overall.

After falling behind by four scores at halftime, the Bruins stepped up and competed in the night's final two quarters.

"We just picked up our intensity, and we just kept going. That's all we can do," said Barlow junior running back Hunter MacDonald, who finished with 13 carries for 48 yards in the loss. "We just kept going. We just can't quit. That's our way of ball."

"I think that when we first started off, we played more run," said junior defensive back Jahvari Martino, who recovered a fumble and also intercepted a Clackamas pass. "We tried to stop the run first and they beat us in the backfield, but in the second half, we played pass first and let our linebackers and line guys get the run. I think that's what we did better." 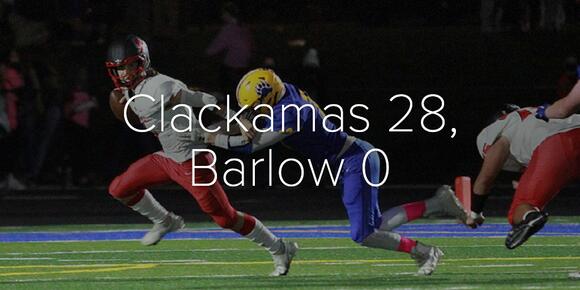 Early on, however, the Cavaliers were flat-out deadly. After the Clackamas "D" forced a three-and-out on the Bruins' first series, they needed just one play and 10 seconds to score, with junior running back Luke Ash taking a handoff over the left side and breaking free for a 42-yard touchdown run and a 7-0 lead just 1 minute, 51 seconds into the contest.

The Cavs' "D" came through again on the next Barlow series, forcing another punt after three downs and — after a 49-yard punt return by senior K.J. Johnson-Gibson — giving the ball back to the offense at the Barlow 8-yard line.

From there, on third-and-goal from the four, junior quarterback Mateo Maehara went left out of the Wildcat formation and scored to make it 14-0 just 5:40 into the contest.

The Cavaliers weren't done with their first-quarter fireworks either. After forcing a third straight Barlow three-and-out — with senior Logan Chastain making two tackles — Clackamas took over at its own 43 with 3:57 remaining in the opening period.

From there, Ash picked up five yards on two carries, junior quarterback Blake Baker hit Williams on the right side for 23 yards, then Baker went to Williams again over the middle and he turned that catch into a 29-yard TD and a 21-0 edge with 2:46 to go in the first quarter.

"It's tough to stop us when we've got that many good players out there," Williams said. "We can both run the ball and throw the ball over your head, so it's nice."

Barlow finally got its offense untracked on the following series, marching 52 yards in 11 plays and driving deep into Clackamas territory, with senior Jake Fay picking up 25 yards on four carries and MacDonald adding 17 more yards on three runs.

But there, facing third-and-four at the Cavaliers' 28, senior quarterback Luke Dow saw his third- and fourth-down passes fall incomplete.

Then, after a trade of turnovers — Martino recovered an Ash fumble and Crouchley picked off Dow on the next play — Clackamas was back in the end zone just 12 seconds later. Facing a first down from the Clackamas 46, Baker went deep over the middle to Williams, and he turned it into a diving 54-yard touchdown and a 28-0 lead with seven minutes left before the half.

The Cavaliers' defense forced another two three-and-outs late in the half, but Clackamas didn't score again, with senior kicker Brandt Maiden — he hit four straight extra points in the game — missing a 21-yard field goal.

The second half looked much like the end of the first, with the Clackamas defense controlling the contest and both teams making mistakes on offense. As to those mistakes, Clackamas sophomore defensive lineman Devin Brooks intercepted a tipped Dow pass at the Cavs' 42, and seven plays later, Martino picked off a Baker pass aimed for Johnson-Gibson at the one-yard line.

The Bruins drove 49 yards on their ensuing series, with MacDonald picking up 13 rushing yards and senior Yamato Uptegrove 16 more on three carries before the drive flamed out at midfield. That was the last serious drive by either team and the Cavs ran out the clock to win.

"It's just a really big team win," Crouchley said. "We just need to keep trying to make plays, and we came out with the 'W' at the end of the day. That's all that matters."

On their side of the ledger, the Bruins promised to keep battling and improving.

"We just can't quit. We've just got to keep pushing," MacDonald said. "We just need to excel in everything. We need to try hard. That's all."

For the game, Ash carried 14 times for 88 yards and one TD, Baker went 9 for 14 passing with two scores and one interception, Johnson-Gibson added two catches for 57 yards and senior Ben Moffett three grabs for 55 yards.

The Falcons speed past Corvallis 5-0 in the title game at Hillsboro Stadium on Saturday.An unforgettable season for the La Salle boys soccer team ended with a Class 5A state championship Saturday, Nov. 13, as the Falcons earned a 5-0 victory over Corvallis at Hillsboro Stadium. The Falcons ended their season with a record of 16-1-1, while Corvallis finished at 12-4-2. La Salle grabbed a 2-0 lead in the first half off two penalty kick goals by senior Mizael Harris, then added a third PK by Harris and a pair of scores from sophomore Kevin Serrano-Maldonado for the final 5-0 margin. Come back to see full coverage of the game at clackamasreview.com. {loadposition sub-article-01}
HILLSBORO, OR・14 DAYS AGO
Clackamas Review

After trailing 7-6, Jesuit football scored late and added a pick-six to eliminate Clackamas from the 6A playoffs. Trailing 7-6, Jesuit High football finally broke through late against Clackamas to take a lead and added on a pick-six to seal the 19-7 win. The win for the No. 9 Crusaders (10-1) sends them to Class 6A quarterfinals where they will play No. 1 Lake Oswego. For Clackamas, its season ends with a 10-2 overall record with the only other loss coming to No. 4 Central Catholic. {loadposition sub-article-01}
CLACKAMAS, OR・14 DAYS AGO

Clackamas Community College sets sights on its fourth consecutive national championshipIt may be too early in the junior college wrestling season for Clackamas Community College to start talking about making a run at a fourth consecutive NJCAA national championship. Or is it? "No, we work hard every day and that's been our dream since day one — to win a fourth," said Marckis Branford, the Cougars' two-time All-American from Easton, Pennsylvania. "It's only been done once before, I think, so that's something we'd like to do." Actually, the Cougars of Clackamas County are looking to become the fourth team to...
CLACKAMAS COUNTY, OR・16 DAYS AGO
Clackamas Review

The top-ranked Falcons will face No. 3 Corvallis at 1 p.m. Saturday at Hillsboro Stadium.The La Salle boys soccer team is poised to attain its biggest goal. The top-ranked Falcons assured themselves a shot at the Class 5A state championship by beating North Salem 4-0 in their state semifinal at La Salle High School on Tuesday, Nov. 9. They pushed across three goals in the first half and one more in the second to dispatch the Vikings and earn a title-game berth against No. 3 Corvallis at 1 p.m. Saturday, Nov. 13, at Hillsboro Stadium. The Spartans (12-3-2 overall) upset...
HILLSBORO, OR・17 DAYS AGO
Clackamas Review

The Falcons come back from a 1-0 deficit and earn a berth in the Class 5A title game.Something had to give. The Tuesday, Nov. 9, Class 5A state semifinal matchup between the La Salle and North Eugene girls soccer teams was akin to the proverbial battle between the irresistible force and the immovable object. And for the longest time, it looked like the immovable force — North Eugene's stellar defense — would win. The Highlanders, who had only been scored on in two earlier games this year, took a one-goal lead late in the first half and held it for...
SOCCER・18 DAYS AGO

Next up, the No. 2 Falcons host No. 3 North Eugene in the state semifinals on Tuesday.The sharks were circling. The La Salle girls soccer team — coming off an 8-0 win its playoff opener — didn't score for almost 25 minutes in its Saturday, Nov. 6, state quarterfinal, but the Falcons said they knew it was only a matter of time. Despite its slow start, second-ranked La Salle scored three times in the first half and once in the second to beat No. 7 Pendleton/Weston-McEwen 4-0 and advance to the state semifinals on Tuesday, Nov. 9. "I felt like...
SOCCER・20 DAYS AGO
Clackamas Review

The Gladiators get a goal from Madison Hill midway through the first half to win.Some days, one goal is all you need. Just ask the Gladstone girls soccer team. The Gladiators, top-ranked in the state among Class 4A teams, managed just one goal in their state quarterfinal contest against Marist on Saturday, Nov. 6, but on this day, that was enough to beat the Spartans 1-0 at Gladstone High School. "I was really nervous until I got that goal," said Gladstone sophomore midfielder/forward Madison Hill, who scored the game's lone goal midway through the first half. "They're such a good...
GLADSTONE, OR・20 DAYS AGO
Clackamas Review

The Wildcats win their 11th straight game and remain unbeaten for the 2021 campaign.The Wilsonville girls soccer team is on a mission. The Wildcats, after losing the 2019 state championship game, then seeing their 2020 campaign truncated because of the COVID-19 pandemic, are determined to get every experience, every goal, every game and every win out of the 2021 campaign. The proved that in spades on Saturday, Nov. 6, racing past Putnam 6-0 in the Class 5A state quarterfinals at Wilsonville High School. "I'm really excited," said Wilsonville senior forward Brighton Ring, who scored twice in the win over...
WILSONVILLE, OR・20 DAYS AGO