The Trussville Tribune is the local newspaper for the cities of Trussville, Clay, Pinson, Argo, Center Point, Springville, Moody and Leeds in Alabama. The Tribune provides up to the minute news online of government, crime, sports, people and events in Jefferson and St Clair counties and is printed weekly.

From The Tribune staff reports 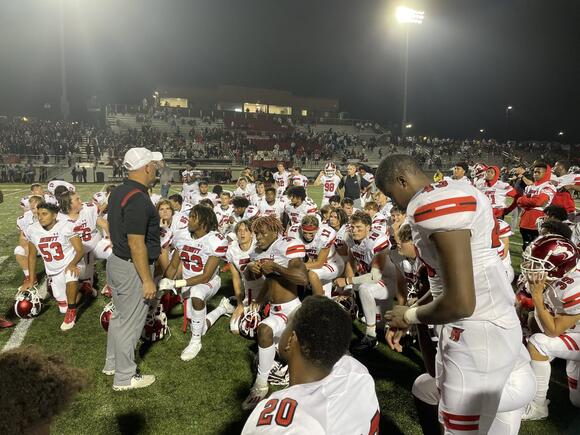 The win secures a playoff spot for Hewitt-Trussville, but it wasn’t easy. The Huskies fell behind 14-7 when Octavious Griffin scored for the Titans with about 10 minutes remaining in the half. Senior running back James Hammonds then broke off a 16-yard TD run for the Huskies with around five minutes to go to the break. A missed PAT meant that Gadsden City maintained a one-point edge going into halftime, 14-13.

The Titans extended their lead when Jacob Perry scored with 7 minutes remaining in the third quarter. With the PAT, it was 21-13, and Hewitt-Trussville was looking to get back into the fight.

Sophomore quarterback Peyton Floyd stepped up with a five-yard touchdown run with three minutes to go in the third quarter, and then hit Kadarius Barnes for the two-point conversion to make it 21-21.

After the Titans returned the ensuing kickoff for an 80-yard touchdown, the Huskies found themselves right back in a hole, 28-21.

With about a minute remaining in the quarter, Matt Miller scored for Hewitt on a one-yard run. The PAT tied things up at 28.

By Bobby Mathews, Sports Editor TRUSSVILLE — The Hewitt-Trussville boys and girls basketball teams celebrated their seniors here Tuesday night, with the girls taking a win while the boys struggled. Boys: Hewitt-Trussville 42, Huntsville 54 Hewitt-Trussville broke out to a 6-2 lead early, but had trouble with Huntsville’s full-court press, falling behind in the first […]
TRUSSVILLE, AL・2 HOURS AGO
The Trussville Tribune

By Bobby Mathews, Sports Editor PINSON — Terry Coner Jr. ignored the blood coming from his left nostril, regarding it as just the price of doing business as Pinson Valley held on against a very physical Gadsden City team for a 63-56 victory on Monday, December 6, 2021. Coner stuffed his nostril with tissue paper […]
GADSDEN, AL・20 HOURS AGO
The Trussville Tribune

From The Tribune staff reports MONTGOMERY — The Alabama Football Coaches Association has named Clay-Chalkville defensive coordinator Matt Glover as the assistant coach of the year for the 6A classification. Each of the winners was nominated by members of the association, picked by a committee of coaches and verified by the ALFCA Board of Directors. […]
CLAY, AL・21 HOURS AGO
The Trussville Tribune

From the AHSAA MONTGOMERY — The Alabama All-Star football team will report to Hattiesburg (MS) Tuesday to begin preparations for the 35th Alabama-Mississippi Classic All-Star football game set to be played Saturday, Dec. 11, at Carlisle-Faulkner Field, M.M. Roberts Stadium on the campus of the University of Southern Mississippi. Kickoff is set for noon. The […]
HATTIESBURG, MS・1 DAY AGO

6A champs: Clay-Chalkville bests Hueytown in shootout for title

By Bobby Mathews, Sports Editor BIRMINGHAM — Ed Osley ran for three touchdowns in the first half and five overall, and Clay-Chalkville put Hueytown to bed for the second time this season to claim the AHSAA 6A football championship here, 46-42, on December 3, 2021. Osley ran the ball 28 times for 157 yards, while […]
HUEYTOWN, AL・4 DAYS AGO
The Trussville Tribune

They are champions, Mr. Lumpkin

by Scott Buttram, publisher Commentary TRUSSVILLE — An inappropriate comment on social media by al.com freelancer Bill Lumpkin regarding the AHSAA State Championship Flag Football game between Hewitt-Trussville High School and Smiths Station High School is garnering quite a bit of attention. And not in a good way. “Why does covering girls flag football make […]
TRUSSVILLE, AL・5 DAYS AGO
The Trussville Tribune

By Bobby Mathews, Sports Editor LEEDS — The Green Wave is 4-0, feasting on early-season competition and averaging 75 points per game; however, tonight the boys from Leeds will find out where they stand as they take on the No. 1-ranked 5A team when Ramsay comes to call tonight at 7 p.m. Ramsay is 4-4 […]
LEEDS, AL・5 DAYS AGO

By Bobby Mathews, Sports Editor LEEDS — Green Wave senior guard Jamal Jordan’s life is pretty busy. If he’s not at school, he’s at team practice. He’s shooting baskets either by himself or with his sister, Mikayla; or he’s at a game on the varsity team where he’s played since his freshman year; if he’s […]
LEEDS, AL・5 DAYS AGO
The Trussville Tribune

By Bobby Mathews, Sports Editor LEEDS — Green Wave senior pitcher Emma Machen put pen to paper on Thursday, December 2, 2021 and signed a scholarship to play softball at Southern Union. Machen, who was key in the circle for Leeds last season due to injuries, plans to play for two years at Southern Union […]
LEEDS, AL・5 DAYS AGO
The Trussville Tribune

Sean of the South: Holler

By Sean Dietrich, Sean of the South  Commentary The SEC Championship football game is playing on a television in an empty living room. In this room there is no furniture, no framed pictures, no lamps, and no signs of life. Just a barren house and spiders who died of old age. This used to be my […]
SPORTS・3 DAYS AGO
The Trussville Tribune

By Bobby Mathews, Sports Editor TRUSSVILLE — The teams playing in the inaugural Alabama High School Athletics Association flag football championship game couldn’t be more different. Hewitt-Trussville has been blowing people out, going undefeated in the sport’s first season as a pilot program; Smiths Station has been getting it down with defense and a low-scoring, […]
TRUSSVILLE, AL・7 DAYS AGO

Springville D too strong for Moody

By Bobby Mathews, Sports Editor SPRINGVILLE — The Springville Tigers were just too much for the Moody Blue Devils here on Tuesday night, November 30, winning 48-36. Despite a slow start that saw the Tigers jump out to a 28-11 lead late in the first half, the Blue Devils had their chances. Caden Helms scored […]
SPRINGVILLE, AL・7 DAYS AGO
The Trussville Tribune

From The Tribune staff reports BIRMINGHAM — The AHSAA Super 7 is in full swing, with the 6A championship game between Clay-Chalkville and Hueytown set for 7 p.m. on Friday, December 3, 2021 in the newly-opened Protective Stadium in downtown Birmingham. As with any new stadium, there are new rules enforced. Fans attending the 6A […]
BIRMINGHAM, AL・5 DAYS AGO
The Trussville Tribune

Editor’s note: This is an opinion column. By Bobby Mathews, Sports Editor Coaches are hired to be fired. That’s what they say, anyway. But there’s something that just feels off about the way Adam Wallace was relieved of his head coaching duties at Moody High School. From a purely football standpoint it’s clearly the wrong […]
MOODY, AL・7 DAYS AGO

The Trussville Tribune is the local newspaper for the cities of Trussville, Clay, Pinson, Argo, Center Point, Springville, Moody and Leeds in Alabama. The Tribune provides up to the minute news online of government, crime, sports, people and events in Jefferson and St Clair counties and is printed weekly.