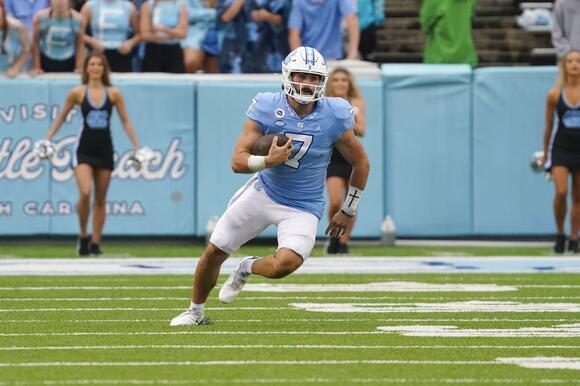 Check out odds, insights and more in our betting preview for the North Carolina Tar Heels vs. Miami Hurricanes college football matchup on October 16, 2021.

Odds for North Carolina vs. Miami

You can reportedly add another notable name to the college football head coach firing list. According to a report from Yahoo! Sports college football insider Pete Thamel, the Washington Huskies are expected to fire head coach Jimmy Lake. Lake, 44, is currently suspended for shoving and hitting current linebacker Ruperake...
COLLEGE SPORTS・20 DAYS AGO
The Spun

Where will Alabama come in on Tuesday night in the new College Football Playoff selection committee rankings?. The Crimson Tide improved to 11-1 on Saturday with a thrilling overtime victory over Auburn in the Iron Bowl. However, Alabama dropped in the latest Associated Press top 25 poll. The Crimson Tide...
ALABAMA STATE・6 DAYS AGO
The Spun

We’ve reached the end of the 2021 college football regular season and the carousel of coaches and players has already begun. But while Lincoln Riley leaving Oklahoma for USC might be the most-high profile coaching move, another Big 12 move could have major implications this offseason. According to Woody Wommack...
COLLEGE SPORTS・5 DAYS AGO
Larry Brown Sports

Deion Sanders being involved in the college football world is a game-changer. We got another glimpse of that on Thursday. Sanders did something highly unconventional and invited a notorious figure to speak to his Jackson State football program. The first-year head coach had social media star Brittany Renner speak to his players.
COLLEGE SPORTS・2 DAYS AGO

The Oklahoma Sooners have lost yet another major recruit in the wake of Lincoln Riley’s departure from the program. On Thursday, five-star running back recruit Raleek Brown announced his decision to flip his commitment from Oklahoma and follow Riley to USC. “Momma I’m Staying Home… Los Angeles let’s turn it...
COLLEGE SPORTS・2 DAYS AGO
The Spun

ESPN analyst Lee Corso is expecting some chaos this Saturday in the college football world. Prior to this weekend’s edition of College GameDay, he revealed which two programs are on upset alert. Corso has been a big believer in the Georgia Bulldogs this season. That being said, he expects them...
COLLEGE SPORTS・21 HOURS AGO
FanSided

Will John Metchie play for Alabama in College Football Playoff?

Alabama receiver John Metchie missed the second half of the SEC title game with an injury. Will he make it back in time for the College Football Playoff?. Alabama’s triumph in the SEC Championship Game over Georgia showed that Nick Saban and the Crimson Tide are still at the top of their game.
ALABAMA STATE・9 HOURS AGO
HollywoodLife

Tom Brady Hopes Son Jack, 14, Will Play Football But Gisele Bundchen Wants Him To Chase His Own Dreams

Tom Brady has an epic legacy in football — and he is hopeful his eldest son Jack will carry the torch, despite stepmom Gisele having a slightly different opinion!. Tom Brady, 44, will forever be known as one of the greatest athletes of all time — and the legendary quarterback is hopeful that his son Jack, 14, will “someday” follow in his footsteps! Tom shared that his eldest child could have a future as the “starting quaraterback” at his dad’s alma mater the University of Michigan on SiriusXM’s podcast Let’s Go!
NFL・3 DAYS AGO

Kamari McClellan picked up an offer from South Carolina over the summer, while he was in town for a Shane Beamer Football Camp session. The 2024 quarterback out of Oxford (Ala.) High School returned recently to watch South Carolina’s 40-17 win over Florida. “It was good, it was nice, I...
ALABAMA STATE・15 DAYS AGO
thefocus.news

Where is Michael Oher now, is he still playing football in 2021?

The former Baltimore Ravens star was the subject of 2009 film The Blind Side but where is Michael Oher now, and is he still playing football in 2021?. Michael Oher is a former offensive tackle who primarily played in the NFL for the Baltimore Ravens. However, Oher is also well...
NFL・2 DAYS AGO
USA TODAY Sports Media Group

Georgia fans heated on Twitter after another loss to Alabama

I’m starting to think Georgia will not beat Alabama until Nick Saban decides to call it a career. Georgia lost its seventh straight game to Alabama on Saturday, with 41-24 defeat in the SEC Championship Game from Atlanta. It was bad all over quite honestly. In the first half, it...
ALABAMA STATE・10 HOURS AGO
247Sports

The Notre Dame football vacancy has apparently been filled as reports indicate that Irish defensive coordinator Marcus Freeman will be promoted to head coach, filling the vacancy created by Brian Kelly's departure for LSU. Amid that, some had pondered if Notre Dame would take a swing at first-year Jacksonville Jaguars coach and former college national champion Urban Meyer, but NFL Network's Ian Rapoport broke down why Meyer leaving for any college job is not plausible.
NFL・2 DAYS AGO

Oklahoma’s coaching search is winding down. Multiple sources close to the situation have confirmed to SI Sooners that plans are being made for OU athletic director Joe Castiglione to stage an introductory press conference on Sunday or possibly early Monday. It's unknown when an announcement could be made, although it...
COLLEGE SPORTS・1 DAY AGO
FanSided

Ohio State failed to make the Big Ten Championship Game but, with Michigan and Iowa battling, someone still wanted the Buckeyes to be involved, clearly. Because Michigan thoroughly manhandled the Ohio State Buckeyes last week in The Game, it was the Wolverines that pushed through to the Big Ten Championship Game for a matchup against the Iowa Hawkeyes.
OHIO STATE・9 HOURS AGO
The Spun

Lane Kiffin isn’t leaving Oxford, Miss. anytime soon. Kiffin’s name has come up in plenty of college football coaching rumors as of late. Miami, in particular, has been thrown around as a possibility to land Kiffin, were he to leave Ole Miss. However, it doesn’t sound like that’s in the...
COLLEGE SPORTS・10 HOURS AGO
Larry Brown Sports

Bronco Mendenhall even left his wife shocked by resignation news

The college football coaching world never ceases to surprise us, and it delivered yet another shocker. On Thursday, Virginia announced that Bronco Mendenhall would be stepping down as their head football coach. Mendenhall called a press conference and shared that it was his decision to step down. He said his...
COLLEGE SPORTS・2 DAYS AGO

Earlier this week, I suggested that new LSU football head coach Brian Kelly should take a look at Georgia Bulldogs assistant Will Muschamp for the Tigers’ defensive coordinator position. After thinking about it for a couple of days, I’ve changed my mind. Muschamp could still be a decent hire, but...
COLLEGE SPORTS・23 HOURS AGO
Larry Brown Sports

The Oregon Ducks had a disastrous first half in the Pac-12 Championship on Friday night, and it was punctuated by one of the worst throws of the entire season. The Ducks were already down 20-0 to Utah with 18 seconds left in the second quarter, leaving them with a huge hole to dig out of in the second half. Despite having the ball at their own 26-yard line and only 27 seconds to do something with it, Oregon decided to try to move the ball through the air with one timeout remaining.
OREGON STATE・1 DAY AGO
AllSooners

Presbyterian College head football coach Kevin Kelley is moving on from the program after just one season. The analytics-driven coach took to Twitter to announce his decision to “pursue other football interests.”. “I am so appreciative of Presbyterian College President Matthew vandenBerg and AD Rob Acunto for the opportunity that...
COLLEGE SPORTS・15 HOURS AGO