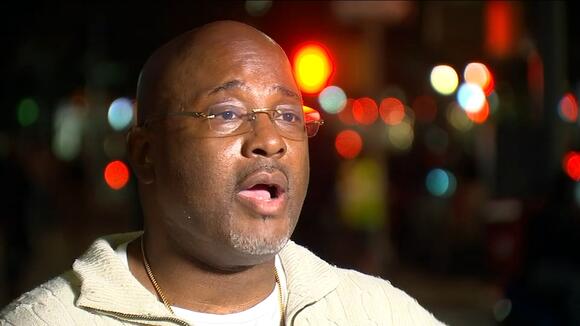 A man who spent two decades behind bars for an armed robbery in Queens that he didn't commit, is out of prison and speaking exclusively to Eyewitness News. The first steps to freedom. It's Chad Breland's first night out of prison after serving 26 years for crimes he did not commit. "I never gave up. You know because I know my innocence," Breland said. "I couldn't sit there at night and rest." He was convicted in 1997 for committing two robberies in November of 1995, in Far Rockaway, Queens. ALSO READ | What Gabby Petito's death by strangulation could mean for Brian Laundrie's case

He stayed in the prison library studying the law. His work paid off with the discovery of evidence that would lead to his exoneration. "We found out there were fingerprints at the scene that actually eliminated Chad and point to someone else," attorney Chad Bonus said. Bonus started reviewing the case in 2016 and found inconsistent witnesses, an unreliable informant and the fingerprints. But that evidence was held back when the district attorney in Queens prosecuted the case and Breland got a 30-year sentence. "Sometimes I felt like I had a black cloud because every time I fight and go around the corner I wasn't getting where I needed to get," Breland said. ALSO READ | Teen girl shot in head in Brooklyn park released from hospital

Thanks to the Queens Criminal Integrity Unit, the case got another chance and new facts came to light leading to Breland's release, but nothing makes up for the lost 26 years. At 52 years old he's starting over. "You know it's going to take time to absorb 26 years. It's not a walk in the park," he said. "I have to take time and heal and deal with a lot of medical issues that I have with my family and rebuild." Relatives died while he sat in jail, but now he wants to fight for the innocent who sit behind bars and work to eliminate immunity for authorities who hold back or falsify evidence. ---------- * More Queens news * Send us a news tip * Download the abc7NY app for breaking news alerts * Follow us on YouTube

4 wanted in fatal shooting of man, injury of another in Jamaica

Police say a 40-year-old man was shot in the head and chest. He died at Jamaica Hospital.
QUEENS, NY・1 DAY AGO
ABCNY

A restaurant owner and his nephew's wife could serve up to 25 years to life behind bars for allegedly setting their Newburgh restaurant on fire in 2017.
NEWBURGH, NY・55 MINUTES AGO

Suspects in two unrelated deadly stabbings at or near Penn Station are now in police custody.
NEW YORK CITY, NY・1 DAY AGO
ABCNY

Parents are outraged over a series of fights that have broken out at a high school on Staten Island.
STATEN ISLAND, NY・15 HOURS AGO
ABCNY

Hate crimes are on the rise in New York City, but the NYPD says they are making progress in fighting them.
NEW YORK CITY, NY・14 HOURS AGO
ABCNY

Dramatic video shows the 50 foot tree on Sixth Avenue going up in flames. The suspect is identified as 49-year-old Craig Tamanaha, who is homeless.
MANHATTAN, NY・3 HOURS AGO

According to the NYPD, the precincts where both incidents took place each have seen shooting incidents increase by around 37% compared to this time in 2020.
BRONX, NY・2 DAYS AGO
ABCNY

Now the officers' story is inspiring others who are holding out hope for their own miracle.
NEW YORK CITY, NY・2 HOURS AGO
ABCNY

A second man who was stabbed by a knife-wielding suspect near Columbia University on Thursday, was a visiting student doing research at the school.
MANHATTAN, NY・2 DAYS AGO
ABCNY

A man has died after being shot in the neck in the lobby of a Bronx building.
BRONX, NY・3 DAYS AGO
ABCNY

Police are investigating after a man was stabbed in the eye in Manhattan on Sunday.
MANHATTAN, NY・2 DAYS AGO
ABCNY

Detectives say the two men had gotten into an argument with another passenger.
MANHATTAN, NY・4 DAYS AGO
ABCNY

The national police dog challenge is a first-of-its-kind contest for departments across the country, including the NYPD.
NEW YORK CITY, NY・2 DAYS AGO
ABCNY

Three people, including a child, were injured after the first floor of a Bronx hair salon collapsed into the basement.
BRONX, NY・2 DAYS AGO
ABCNY

Police in Suffolk County are investigating after one man was killed and two others were injured in a shooting on Sunday morning.
SUFFOLK COUNTY, NY・3 DAYS AGO
ABCNY

Suffolk Officer Tim Thrane, who spent weeks in a medically induced coma after being hit by an alleged drunk driver, was discharged to cheers Friday.
SUFFOLK COUNTY, NY・5 DAYS AGO