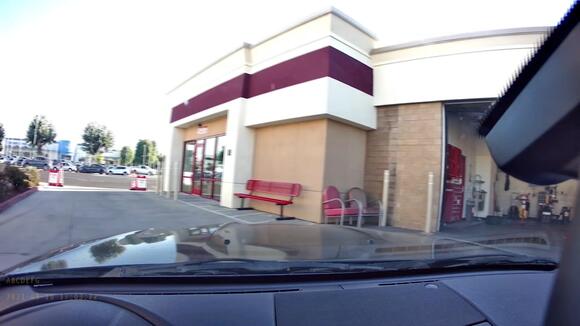 A Peninsula man is looking for accountability after he says a tire shop damaged his car. He says what his dash cam video uncovered was much more serious than just a cracked windshield and nicked paint. Bill noticed a prominent crack on the driver's side of his BMW Z4's windshield, after a trip to America's Tire in Santa Clara on September 10th to have a flat tire replaced. "I went home and checked the dash cam video to see what happened with my windshield, and I found what they were doing to my car and disrespecting me and my vehicle." RELATED: EXCLUSIVE: San Jose father warns others after being harassed over dinosaur flag What Bill, who only wants to go by this nickname found, was the two employees took his car out for what can be described as a joyride. The dashcam video reveals hysterical high-pitched laughing and a man saying "Bro, I'm so done for the day!" Bill says hearing the employees say they're going to throw valve stems may have contributed to the cracked windshield and/or a nick in the paint on the hood. In another portion of the video, a man can be heard saying "I guess the customer's not here, let's go!" RELATED: EXCLUSIVE: Senior citizen, 14-year-old girl punched in head in unprovoked attacks in San Francisco But what is perhaps most distressing is what was said next. "What da hell? Too fast!" The workers can be heard mocking Bill, using some kind of Asian accent. "It's blatant racism" says Bill. When asked about his reaction to the video, Bill says he was appalled. "I was pretty horrified. And shocked. And later I became pretty furious." VIDEO: EXCLUSIVE: Neighbor's racist rant against Chinese family caught on camera in San Jose

A San Jose couple is trying to raise awareness after a hate incident occurred right on their front porch.

Bill says after he alerted America's Tire about the damage and sent America's Tire the dashcam video the company offered to file a claim to repair his BMW. But things didn't escalate until a car enthusiast friend of Bill's, with nearly a quarter-million followers on Instagram, posted the video showing the worker's behavior. Bill says he got a call from the assistant to the Vice President of the company. "They haven't really tried to apologize to me for what happened, they blamed the employees for what happened." After a trip to America's Tire along Steven's Creek Boulevard, a manager said he could not comment directly, but said the two employees were no longer working at that location. TAKE ACTION: Resources to help the Asian American and Pacific Islander community ABC7 News' Dion Lim followed up with America's Tire PR, who sent ABC7 News this statement: "America's Tire was recently made aware of the contents of the video and is sorry for the inappropriate conduct of two employees. We moved swiftly to investigate and the two employees are no longer employed by America's Tire. The Customer has been contacted and the vehicle damage claimed is being addressed. At America's Tire, our policy is to treat all customers with the respect they deserve. Any conduct otherwise will not be tolerated by America's Tire." Bill says the company did offer to give him a new set of tires and $5,000 if his friend took down the video. To him, it's not enough. "It's definitely insulting because they're not treating me as a victim of racism, but they're treating me as a PR nightmare. ABC7 asked America's Tire, in response to their statement, what they would do to address the racist mocking. Dion's question was not answered in time for deadline.

It should not have taken social media to make them do the right thing. If it weren't for that dashcam video, they would have lied their @sses off.

Literally the internet community is awful! This is a story about a man experiencing racism at tire place, and no surprise here the comment section is filled with varying racist opinions.

The company should NOT be waiting for an insurance claim that is bullsh**. They should fix it right here and now and let them wait for the claim to go thru. How many other cars do their employees take people's cars for a joy ride?

The Bay Area sample was detected outside of San Francisco, suggesting this process of detection could be faster than clinical samples. According to one scientist, it could even be a way to discover new variants we don't yet know about.
CALIFORNIA STATE・20 HOURS AGO
ABC7 News Bay Area

Here are the winners for all recent ABC7 contests, promotions and sweepstakes. They are listed for at least thirty (30) days after the winner(s) are notified or announced.
SAN FRANCISCO, CA・20 HOURS AGO
ABC7 News Bay Area

"We have learned that science and medicine has to be at the table. We have shared that in our playbook. We talk about leading with vaccinations, testing and science first," Salesforce chief medical officer Geeta Nayyar said.
SAN FRANCISCO, CA・4 HOURS AGO
ABC7 News Bay Area

After almost disappearing from overwintering sites in California last year, monarch butterflies are back this year in huge numbers, but environmentalists caution they are still endangered.
CALIFORNIA STATE・1 DAY AGO

Bay Area health experts warn omicron surge is coming, but will it be worse than delta?

"In the Bay Area, I expect people will get omicron," said UCSF's Dr. Peter Chin-Hong, who added we could see signs of a surge within two weeks. "If they do get it, it will be very mild and people wouldn't even know they have it."
PUBLIC HEALTH・1 DAY AGO
ABC7 News Bay Area

"We were able to show that students could be safe, faculty could be safe on campus, when working together collaboratively with the public health officials," Dr. Michaela George, an assistant professor at Dominican University and co-author of the study, told ABC7 News.
MARIN COUNTY, CA・21 HOURS AGO
ABC7 News Bay Area

A memorial service will be held on Thursday for Kevin Nishita, the guard tragically killed while protecting a Bay Area news crew from an attempted armed robbery.
SAN JOSE, CA・1 HOUR AGO

The SF Standard: Breaking down the race for San Francisco's Assembly District 17

ABC7 and The San Francisco Standard are teaming up to introduce the San Francisco Assembly District 17 race, break down who's running and explain why it matters
SAN FRANCISCO, CA・2 DAYS AGO
ABC7 News Bay Area

Travelers will be required to show a negative result from a COVID-19 test taken within a day, rather than the allowed result from a 72-hour window period.
SAN FRANCISCO, CA・2 DAYS AGO
ABC7 News Bay Area

NO FIREPLACE, NO PROBLEM! Bring the magic of the holiday season into your living room with ABC7's yule log.
PLEASANTON, CA・1 DAY AGO

As if congested streets and freeways aren't challenging enough, the next concern is an explosion in air traffic from delivery drones and a new generation of vertical lift transport vehicles, known as air taxis.
SAN JOSE, CA・2 DAYS AGO
ABC7 News Bay Area

"We hope this will be a teachable moment for us as we repair and continue to build bridges with the SFPD," said Hilda and Jesse owners, Rachel Sillcocks and Kristina Leidags Compton.
2 DAYS AGO
ABC7 News Bay Area

"This isn't news that you're going to want to hear," said Vishal Garg. Not exactly the spirit of the season as the CEO then accused the workers of 'stealing'.
BUSINESS・2 DAYS AGO
ABC7 News Bay Area

For ten days, the high-tech art will be seen on glowing on several buildings downtown. The 5-minute displays are meant to help boost business in the city, after viral videos of crime have tarnished San Francisco's reputation.
SAN FRANCISCO, CA・4 DAYS AGO
ABC7 News Bay Area

'Who would do this?' 90-year-old Greek statue severely damaged at SF's Legion of Honor Museum

The statue is a reproduction of a sculpture in the Vatican, depicting a Greek god and his two sons. The heads of both sons were taken off, among other damage.
SAN FRANCISCO, CA・4 DAYS AGO
ABC7 News Bay Area

Stick with office reopening plans or push back timelines again? Google has already confirmed it is now waiting until the new year to assess when office locations are ready for the transition back.
SAN JOSE, CA・5 DAYS AGO
ABC7 News Bay Area

OMICRON IN SF: A UCSF doctor details how they figured out a fully vaccinated traveler had a case of the new coronavirus variant.
SAN FRANCISCO, CA・6 DAYS AGO