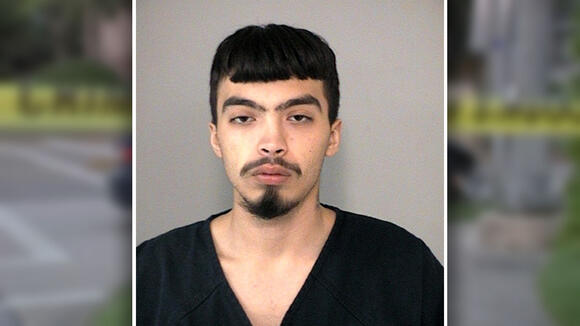 Authorities in Fort Bend County have arrested a 19-year-old for the "senseless" killing of a driver who they say was shot and killed after the two men were involved in a minor crash Friday. According to officials, Ramon Vasquez is said to have shot Humphrey Magwira multiple times at the intersection of Beechnut and Addicks-Clodine in the Mission Bend neighborhood. Magwira, 20, was less than a mile away from his home at the time of the shooting. He suffered multiple gunshot wounds before he was flown to a hospital where he later died. Doorbell video from the area showed Magwira's car T-bone Vasquez's vehicle at the intersection. Almost instantly, Vasquez stepped out of his vehicle, fired six shots, then got back in his car and sped off. Vasquez was later arrested and charged with murder. He's now in the Fort Bend County Jail. His bond was set at $500,000. "Totally inappropriate actions of one individual to kill another human over some bent metal," one investigator commented. "It's very upsetting. It's senseless." The entire incident happened in less than 20 seconds. Those who lead and live in that community commented about the shooting. "We're talking about a neighborhood here in our county that is, obviously, heavily populated with several homes," said Fort Bend County Sheriff's Office spokeswoman Jacqueline Preston. "It certainly could have been much worse than it was." "I was very terrified, because I work out outside here," said a neighbor who was awakened by the sound of the shooting. "So, I could have gotten caught in the crossfire." Investigators originally said it appeared to be a case of deadly road rage, but later said it was not. Follow Briana Conner on Facebook , Twitter and Instagram . RELATED: Woman shot in the lower back while driving on I-69 in suspected road rage incident

Victim Magwira, 20, was less than a mile away from his home at the time of the shooting. Almost instantly, Vasquez stepped out of his vehicle, fired six shots, then got back in his car and sped off. Vasquez was later arrested and charged with murder. He's now in the Fort Bend County Jail. His bond was set at $500,000.Could have been anyone of us. Someone's Child, Grandchild, brother, cousin, friend, gone. What is the answer?When will it stop?Whats it going to take? When will Judges stop setting bonds be stopped for these types of crimes- Murder should not have a bond!

You people making racist comments about the situation is one of the many reasons that senseless like this is perpetuated, if you all knew that words, even on comment sections such as this one hold weight, and you need to understand what it is to joke around and be you in on one hand, but in the other hand, not knowing if his family, friends or children, are reading your opinions that are clearly just not appropriate for the situation, it’s not called political correctness, because I’m all for speaking your mind, but this is tact-A seemingly lost concept for adults caught up in the conditioning by MSM propagandist to regress into juvenile states of minds to be most easily manipulated. For example, instead of trying to bring awareness to the comment that racist and wake people up to the consequences of the latter, another poster might fire off a comment about how white people are this and that. Now, instead of discussing the craziness and senseless of the situation we came to read about

When officials responded to a drive-by shooting, a suspect reportedly took off, sparking a chase. Two Pct. 1 deputies and two HCSO deputies fired their weapons in the deadly shooting.
HARRIS COUNTY, TX・4 HOURS AGO
ABC13 Houston

The suspect reportedly pulled over several times, acting as if he would stop, but took off again.
HITCHCOCK, TX・21 HOURS AGO
ABC13 Houston

Police say the woman was with a friend when another woman walked up and fired multiple times. The woman turned her back to protect her child from gunfire.
HOUSTON, TX・2 HOURS AGO
ABC13 Houston

Houston police officers are educating owners on getting specific security measures after only one of the 24 shops broken into had an alarm system that notified police of the multiple break-ins.
HOUSTON, TX・17 HOURS AGO

Mother charged with DWI after crashing into tree with daughter in Cypress area, Pct. 4 says

Officials said the woman's 10-year-old daughter, who was in the passenger seat, sustained minor injuries. The mother's bond was set at $2,500.
CYPRESS, TX・48 MINUTES AGO
ABC13 Houston

Man in critical condition after being shot while picking up money from employer's home, HCSO says

A witness at the scene told investigators that the 30-year-old victim was waiting outside for his boss before the shooting happened.
HARRIS COUNTY, TX・14 HOURS AGO
ABC13 Houston

An HPD officer tried to save the victim from the car that caught on fire after crashing into the freeway pillar, but the driver was found unresponsive.
HOUSTON, TX・13 HOURS AGO
ABC13 Houston

Four people are dead after a suspected drunk driver crashed into a golf cart in Texas. Officers from the Galveston Police Department responded to the scene at the intersection of 33rd Street and Avenue R around 11:35 p.m. Saturday and found the adult driver of the golf cart dead at the scene, police said.
GALVESTON, TX・18 HOURS AGO

The victim was riding in a pickup truck with friends when an argument began with the suspect in another truck at a gas station near South Central Houston, according to police.
HOUSTON, TX・1 DAY AGO
ABC13 Houston

Investigators said a man was seen running through the apartment complex, chasing other men and shooting at them.
HOUSTON, TX・1 DAY AGO
ABC13 Houston

HPD is still searching for the murder suspect in a May shooting after he got into an argument with the victim and shot him.
HOUSTON, TX・2 DAYS AGO
ABC13 Houston

MCSO said the circumstances surrounding the death are under investigation, and there is no additional information at this time.
PORTER, TX・1 DAY AGO

'How do you sleep at night?' Hit-and-run suspect still free after Journee McDaniel's death

Investigators established Pedro Vargas Garcia as the driver in a hit-and-run that killed a 7-year-old. Police said he tried to report his truck stolen after the crash.
HOUSTON, TX・1 DAY AGO
ABC13 Houston

Investigators said a family was having a get-together at their apartment when a man they've had trouble with in the past showed up again.
HOUSTON, TX・2 DAYS AGO
ABC13 Houston

The origin and cause of the fire is still under investigation, according to authorities.
HARRIS COUNTY, TX・23 HOURS AGO
ABC13 Houston

The husband and father of five children had his life suddenly taken after a tire from an 18-wheeler jumped the center wall and sheared the roof of the vehicle.
HARRIS COUNTY, TX・1 DAY AGO
ABC13 Houston

"We offer our heartfelt sympathies to the family of the two boaters who didn't make it and wish them swift healing in the wake of this tragedy," said Sector Houston-Galveston chief warrant officer.
FREEPORT, TX・18 HOURS AGO
ABC13 Houston

"It's about as bad as it can be right now, so we need people to heed the burn ban," Montgomery County Fire Marshal's Office said.
MONTGOMERY COUNTY, TX・14 HOURS AGO
ABC13 Houston

"It landed on a car!" Nearby security video captured the moment a heavy truck fell off the East Beltway overpass, crushing an SUV. A 22-month-old boy did not survive.
HARRIS COUNTY, TX・2 DAYS AGO
ABC13 Houston

2 shot and killed blocks apart within minutes in Third Ward

There were at least four shootings overnight, and two of them were in the Third Ward. Those two deadly shootings happened within minutes of each other, about a half-mile apart.
HOUSTON, TX・3 DAYS AGO