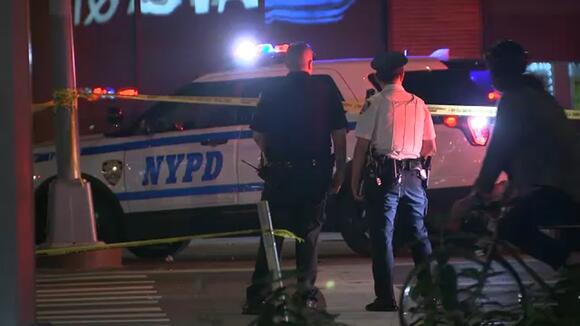 A teenager was shot and killed after gunfire rang out near a busy intersection in Manhattan Friday night. Police say they found a 16-year-old boy lying in the street with a gunshot wound to his face near the intersection of Delancey Street and Suffolk Street on the Lower East Side around 8:30 p.m. He was taken to Bellevue Hospital where he he was pronounced dead. Another victim, of an unknown age, walked into Beth Israel Hospital with a gunshot wound to his hip, he is expected to survive. Police blocked off the scene, which was right in front of an AT&T store. No arrests have been made and the investigation is ongoing. ALSO READ | Teen girl shot in head in Brooklyn park released from hospital

This violence is getting ridiculous. I hope who every the new Mayor is, can help to put an end to this.

Officials say a man is in custody after stealing a school bus and crashing into several parked cars along the way.
BROOKLYN, NY・17 HOURS AGO

The teen's family said he has big dreams to go into real estate and had been helping at his father's business on the weekends when he's not in school.
BROOKLYN, NY・1 DAY AGO
ABCNY

Before starting his training as a firefighter, Vincent Malveaux worked as an EMT for four years including throughout the coronavirus pandemic.
NEW YORK CITY, NY・4 HOURS AGO
ABCNY

A man accused of pretending to be a Meals on Wheels delivery person is accused of robbing an 81-year-old woman in the Bronx.
BRONX, NY・1 DAY AGO

Officials are investigating how an anti-vaccination ad, designed to look like a New York City ad encouraging vaccination, somehow ended up in a bus stop in Brooklyn.
BROOKLYN, NY・23 HOURS AGO
ABCNY

Suffolk Officer Tim Thrane, who spent weeks in a medically induced coma after being hit by an alleged drunk driver, was discharged to cheers Friday.
SUFFOLK COUNTY, NY・31 MINUTES AGO
ABCNY

A New Jersey police officer accused of killing a pedestrian and then taking the victim's body to his home was allegedly driving intoxicated, according to court documents.
NEWARK, NJ・2 DAYS AGO
ABCNY

They are accused of slapping a 3-year-old boy across the face last Friday. Police say the women approached an 18-year-old girl Sunday and pulled her to the ground.
BROOKLYN, NY・2 DAYS AGO