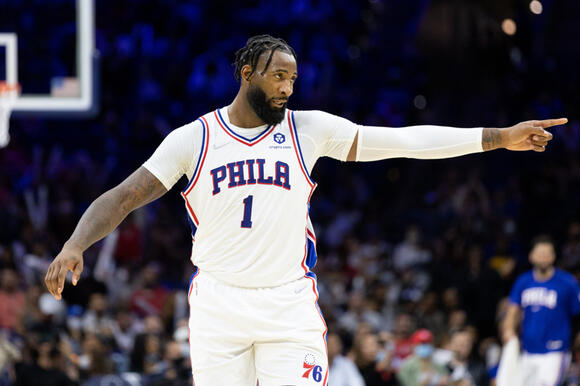 Since his time playing with the Detroit Pistons, Andre Drummond has bounced around the NBA the past few seasons, as he has played with the Cleveland Cavaliers and the Los Angeles Lakers.

This past offseason, he signed with the rival Philadelphia 76ers, thus pausing his heated feud with Joel Embiid.

At Little Caesars Arena on Friday evening, Pistons fans, who had not seen Drummond play since March of 2020, took several opportunities to boo the ex-Piston.

According to MLive, "Fans let out cheers and claps when Drummond missed a free throw, turned over the ball or committed a foul. There wasn’t an opportunity that fans didn’t take to let the former Pistons star know how they felt. He played through it though, notching 13 points and four rebounds by the end of the half. He made five of his seven shot attempts from the field and sank four of his five free-throw attempts."

Drummond was selected by the Pistons with the ninth overall selection in the 2012 NBA Draft.

Matthew Stafford: 'Just Another Football Game' Once Ball Is Snapped

Matthew Stafford was asked about playing his former team following the Los Angeles Rams victory over the New York Giants.

Why 0-17 Is Not Completely Unrealistic

Read more on why an 0-17 season isn't completely out of the picture for the Detroit Lions.

Angry Dan Campbell Blames Himself for Loss: 'They Whipped Our Ass'

Since joining the 76ers, head coach Doc Rivers has observed that the 28-year-old has embraced his new role with the team.

“I think it would be difficult to come in and just be a role player,” Rivers told reporters pregame. “And by the way, everybody’s a role player, other than one percenters. They really are. That’s the problem is 90% of them don’t know that yet. He’s been great. He’s been one of those guys that guys love, just been a great light."

Become a premium AllLions member, which grants you access to all of our premium content and gets you a FREE subscription to Sports Illustrated! Click on the link below for more

Blake Griffin and Isaiah Stewart fight was one of the most looked upon moments from the Nets vs Pistons most recent clash. With game being as tight and as compact as it was, Nets’ big man Blake Griffin and Pistons’ Center Isaiah Stewart were almost on the verge of throwing hands at one another, but it seemed like after the initial contact the former player decided to pull out of the action, giving more importance of his presence on the court.
NBA・26 DAYS AGO
FastBreak on FanNation

Kevin Durant was thrown out of the game between the Detroit Pistons and Brooklyn Nets on Sunday in Brooklyn.
NBA・29 DAYS AGO
fadeawayworld.net

The NBA season is in full effect and we have already seen some major moves made this offseason. These have been massive roster moves, with Russell Westbrook finding a new home in Los Angeles while the Washington Wizards and Chicago Bulls completely revamped their rosters. There could very well be even more player movement before this season’s trade deadline.
NBA・5 DAYS AGO
Sportsnaut

Bookmark. Save. Do your thing. We will be providing constant updates on this page as it relates to the biggest
NBA・4 HOURS AGO

The Indiana Pacers suffered a bad loss on Wednesday night when they fell to the Detroit Pistons in Michigan. Coming into the game, the Pistons had a 3-10 record in their first 13 games, but they went out and beat the Pacers 97-89 to pick up their fourth win of the season.
NBA・14 DAYS AGO
FanSided

Detroit Pistons: Why fans should be excited about 4 wins

The Detroit Pistons got their 4th win of the season over the Indiana Pacers on a night that looked like a throwback. The offense looked like 2004, as both teams were chucking bricks all over Little Caesar’s Arena. The two teams shot 17-of-65 from 3-point range between them for a combined 26 percent. Yikes.
NBA・13 DAYS AGO
FastBreak on FanNation

The Golden State Warriors have ruled out Andre Iguodala for their game against the Detroit Pistons on Friday night.
NBA・12 DAYS AGO
FanSided

Detroit Pistons: Why this Warriors game is the biggest in years

The Detroit Pistons will take on the Golden State Warriors at home tonight in a game that will be the biggest in years for Detroit. You might not think that a team with a 4-10 record playing the NBA’s best team (13-2) is much to get excited about but these four wins have been different for Detroit.
NBA・12 DAYS AGO

Picked to finish dead-last in the league this year, the Oklahoma City Thunder have actually begun the 2021-22 NBA season as a solid-looking team. They are one of the youngest teams in the league this year and it is definitely a long shot to think this team can make the playoffs, but they are currently 5-8.
NBA・14 DAYS AGO
AllLions

Things took an ugly turn at Little Caesars Arena during the Los Angeles Lakers-Detroit Pistons contest Sunday evening. LeBron James has been ejected for only the second time in his career, after he deliberately and violently elbowed Pistons forward Isaiah Stewart. Early in the third quarter, Stewart attempted to box...
NBA・10 DAYS AGO
USA TODAY Sports Media Group

The Golden State Warriors (13-2) travel to Little Caesars Arena Friday to take on the Detroit Pistons (4-10). Tip-off is scheduled for 7 p.m. ET. Below, we look at the Warriors vs. Pistons odds and lines, and make our expert NBA picks, predictions and bets. Two-time MVP Stephen Curry ended...
NBA・12 DAYS AGO

According to a report from Keith Pompey, the Philadelphia 76ers and Detroit Pistons have discussed a trade that would send Ben Simmons to the Pistons in exchange for Jerami Grant and more. From Keith Pompey:. The team has engaged in ongoing discussions with the Detroit Pistons to acquire Grant, another...
NBA・13 DAYS AGO
103.3 WKFR

Things got heated in Detroit between Pistons' star Isaiah Stewart and Lebron James after James bloodied Stewarts' face. It was an eventful weekend in Detroit with two of the best teams in the NBA coming to take on the Pistons. Steph Curry and The Warriors came to Detroit on Friday, but Steph was not in the lineup. That did not stop the NBA's current leading scorer from stealing the show though.
NBA・9 DAYS AGO
FanSided

Cory Joseph is not the problem with the Detroit Pistons

Every year fans of the Detroit Pistons seem to choose one guy on which to focus their ire. Last season it was Mason Plumlee, the center who was “taking minutes” from Isaiah Stewart (boy could the Pistons use Plumlee now!) and this year the honor falls on Cory Joseph. I...
NBA・11 DAYS AGO
FanSided

Who will start for Detroit Pistons if Killian Hayes is out?

The Detroit Pistons will take on the Lakers tonight at home but may be without the services of Killian Hayes. Hayes sprained his thumb and has been playing through it, though he seems to have aggravated the injury in all of the last three games. After the embarrassing loss to...
NBA・10 DAYS AGO
FanSided

The Detroit Pistons should not trade Jerami Grant….yet

Buy low and sell high, right? We’ve all heard it before, to the point of it becoming annoying. Jerami Grant last season made his trade value the highest it had ever been in his career after averaging well over 20 points and proving he can be the first option on offense as well as a defensive stopper.
NBA・8 DAYS AGO
lakers365.com

Despite a solid effort, the Detroit Pistons find themselves on the losing end of things once again. They look to try and pick up their fifth win of the season against a Los Angeles Lakers team just getting back their superstar. The Pistons really held their own when they took on the best team in the NBA, the Golden State Warriors, on Friday night.
NBA・10 DAYS AGO
FanSided

Is the Detroit Pistons’ shooting really this bad? Who is to blame?

The mantra of the season for fans of the Detroit Pistons has been “When these shots start falling…”. The Pistons are making history nearly every night with their poor shooting and we just keep waiting for the breakout or at least a return to the norm. Detroit’s shooting was bad...
NBA・4 DAYS AGO
FanSided

One quarter every game is killing the Detroit Pistons

The Detroit Pistons are a pretty good 36-minute NBA team. The problem is that games are 48 minutes. In just about every Pistons’ loss, they have been undone by a quarter where they just couldn’t make a shot. They are putting up historically bad shooting numbers right now and with few exceptions have mostly lost games where they scored fewer than 20 points in one of the four quarters and weren’t able to recover.
NBA・4 DAYS AGO