Retailers notice many Halloween shoppers are swooping up costumes, candy, and decorations early 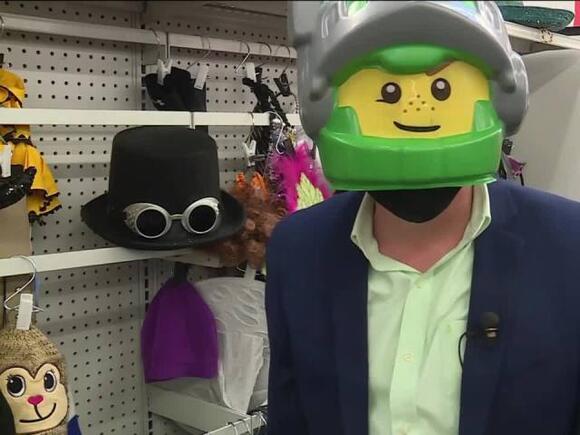 MENASHA, Wis. (NBC 26) — There's a surplus of shortages hitting the nation right now much on the account of a lack of truckers. And with Halloween just around the corner, some are starting to notice that pumpkins, costumes, and even candy are getting more difficult to find or more expensive than in years past. But, for the early-bird crowd, many aren't taking that risk and instead are stocking up now.

At the Goodwill in Menasha, there are still plenty of costumes to choose from. In part to thanks to the generous donations, folks make daily.

Dorn says many of her customers like to create their own outfits, mixing and matching items until they create the perfect ensemble. This is the type of Halloween costume creations Goodwill has become known for over the years.

"You can't go to a Halloween store and find a Golden Girls costume. But at Goodwill you can search through the whole entire store and find everything you need for that do-it-yourself custom look," says Dorn.

But if you're not one to think outside the box, Goodwill has original outfits on hand too. Store employee McKenna is sharing some of the looks with NBC 26 that likely won't be around much longer.

"It really does seem like people are shopping early. There is a renewed excitement for Halloween this year because we're able to go out and celebrate and be with people more so than last year," adds Dorn.

So, if you plan on suiting up this Halloween and want to stand out in the crowd you might want to do your shopping soon. Because according to the National Retail Federation an estimated two-thirds of Americans are ready to get back out for the spooky holiday, and you don't want to be discovering what's left at the last minute.

For over 70 years Tower Chicken Farm has been the place where Milwaukeeans and customers from as far away as Illinois line up days before Thanksgiving to snag their holiday birds.
MILWAUKEE, WI・18 HOURS AGO
TMJ4 News

Over the weekend, many local businesses donated percentages of their proceeds from Black Friday and Small Business Saturday sales.
WAUKESHA, WI・8 HOURS AGO
TMJ4 News

The #GivingZOOday fundraiser event will be taking place at the Racine Zoo on November 30, in order to raise funds.
RACINE, WI・18 HOURS AGO
TMJ4 News

For many small businesses, Black Friday has never been a sales boon. For 27 years, this small shop on Main Street in Waukesha has offered another kind of value.
WAUKESHA, WI・3 DAYS AGO
TMJ4 News

Candy Cane Lane has officially opened for the season in West Allis. Dozens of cars lined up on 95th and Oklahoma on Friday night, each of them eager to see the holiday lights display.
WEST ALLIS, WI・3 DAYS AGO
TMJ4 News

Short lines for Black Friday at Bayshore, but hundreds show up at Lakefront Brewery

From big box stores, like Kohl's and Target, to local favorites, like Lakefront Brewery, Black Friday shoppers braved temperatures in the teens this year to snag the best deals.
FOOD & DRINKS・3 DAYS AGO

It's beginning to look a lot like Christmas. On Friday, Candy Cane Lane will officially be open for it's 36th year.
WEST ALLIS, WI・4 DAYS AGO
TMJ4 News

Families in Waukesha pause at 4:39 p.m. to pray for victims

At 4:39 time stopped for families here in Waukesha as they came to pray, support, and remember the lives that were lost and those who are still recovering from the nightmare that unfolded just a couple of days ago.
WAUKESHA, WI・4 DAYS AGO
TMJ4 News

The Waukesha Christmas parade was going on just a block away from the Craft Lounge on Main Street.
WAUKESHA, WI・4 DAYS AGO
TMJ4 News

Thousands had a free hot meal at Racine's Festival Hall on Thursday for the annual Dan & Ray's Rendering Thanks Thanksgiving dinner.
RACINE, WI・4 DAYS AGO

Milwaukee families express what they are thankful for

Families in Milwaukee got out to enjoy holiday lights at various downtown parks after their Thanksgiving meals.
MILWAUKEE, WI・4 DAYS AGO
TMJ4 News

It's a Christmas wonderland at American Family Field where 2 million lights illuminate the parking lots around the baseball stadium as part of the Milwaukee Brewers inaugural Magic of Lights event.
WAUKESHA, WI・5 DAYS AGO
TMJ4 News

Showing up for the community is nothing new for The Northcott Neighborhood House, organizers and volunteers packed 1,000 thanksgiving meals with all the trimmings.
CHARITIES・4 DAYS AGO
TMJ4 News

It’s a slam dunk to help others. Members of the Marquette Men’s Basketball team took to the kitchen, helping prepare meals for the Salvation Army’s big Thanksgiving feast.
ADVOCACY・4 DAYS AGO
TMJ4 News

Seeing Culver's packed is no surprise for Wisconsinites, but many weren't only coming to grab food on Wednesday, they were also coming to help those affected by the Waukesha Christmas Parade tragedy.
WAUKESHA, WI・5 DAYS AGO
TMJ4 News

Children's Wisconsin provided an update Wednesday on its patients following the Waukesha Christmas parade tragedy. Three more kids injured on Sunday will be home for Thanksgiving. Officials say they will continue their recovery from home.
WISCONSIN STATE・5 DAYS AGO