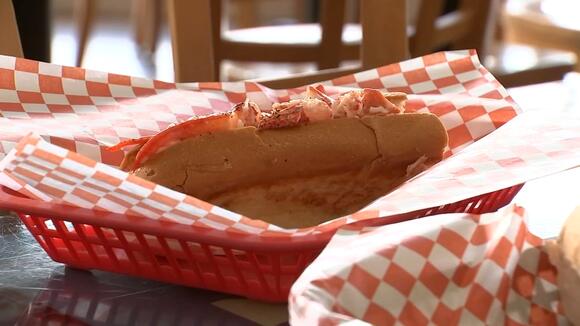 If you want a taste of Boston, but don't want to travel north for the American League Championship Series, there's a restaurant where you can find one of New England's iconic sandwiches. For nearly a decade, 'Maine-ly Sandwiches' has offered New England food in the Houston area. it's a venture that New England native, Buddy, wanted to start. He wanted to bring the famed lobster roll to Houston. "When we first opened, I called my mother said, 'How do you make it?' I prefer how mom makes it," he explained. "That's what I've served to many, many thousands of customers." A lobster roll is simply how it sounds. It's pieces of lobster in a roll. You can get it with mayo or butter, and that's it. "You know how we do barbecue every week in Texas and we have leftovers," Buddy explained. "The lobster we steam on the weekends, we steam too much. We have it in the fridge. Take it out of the fridge, slap it on a hotdog bun, and you have a lobster roll." Getting the protein isn't easy. Buddy said it was the hardest part of bringing the sandwich to Houston. The lobster roll in Houston is similar to what you'd find in Boston, but there is a slight difference. "What you would typically get in New England is a hotdog size," Buddy said. "Because we're in Texas, we made the Texas-sized lobster roll." Buddy has a few locations. He's a transplant from Maine. With the Red Sox playing the Astros in the American League Championship Series, he says it's a win-win for who he wants to see win, and introducing more Houstonians to Boston cuisine. Follow Nick Natario on Facebook , Twitter and Instagram .

Manatee rescued near Texas City Dike after being spotted near refineries

MANATEE SIGHTING: The large mammal was spotted in an industrial canal, but thankfully, it appears to be doing OK.
TEXAS CITY, TX・1 DAY AGO
ABC13 Houston

After thousands of noise complaints in Houston neighborhood, this new tool may help

These neighbors who live near Washington Ave., Almeda and Emancipation say they are not trying to shut down businesses. They're just hoping to turn down the volume.
HOUSTON, TX・2 DAYS AGO
ABC13 Houston

Battleship Texas open to the public one last time this weekend

Don't miss out! The 107-year-old relic of both World Wars is open Saturday and Sunday before it gets moved.
TEXAS STATE・1 DAY AGO
ABC13 Houston

Mark Cuban just bought an entire town in Texas from a friend who needed to sell it, reports say

Talk about a Texas-sized investment! Shark Tank entrepreneur and owner of the Dallas Mavericks Mark Cuban just purchased an entire town near the Big D.
TEXAS STATE・1 DAY AGO

On the 33rd annual World AIDS Day, a vigil was held in downtown Houston to remember the nearly 33 million people who have died due to the illness.
HOUSTON, TX・2 DAYS AGO
ABC13 Houston

Texas state parks are introducing events at locations for all to avoid the holiday crowds and such.
TEXAS STATE・2 DAYS AGO
ABC13 Houston

Disney inspires hope with $25,000 gift to Toys for Tots Houston

As part of a $500,000 donation to Toys for Tots, Disney is bringing joy and comfort to families and children in need right here in Houston this holiday season.
HOUSTON, TX・2 DAYS AGO
ABC13 Houston

You see the paper tags every time you drive in Houston. Turns out, many of them are fake and police say it's making it difficult to solve crimes.
TEXAS STATE・2 DAYS AGO

Rice rockets to top spot in U.S. ranking of most expensive stadium-area homes

Homes near Rice University's stadium rank tops in the U.S. for being expensive.
HOUSTON, TX・4 DAYS AGO
ABC13 Houston

Companies must include things like the exact temperatures at which the power plants can continue operating, and fix any acute issues from the freeze.
TEXAS STATE・2 DAYS AGO
ABC13 Houston

Houston is considered to be third on a list of unhappy employees in the workforce.
HOUSTON, TX・4 DAYS AGO

"I'm hoping I can spread the word about what I do and the importance of childhood cancer awareness," the teen explained.
HOUSTON, TX・4 DAYS AGO
ABC13 Houston

In the midst of the supply chain disruptions, you would figure that mom-and-pop businesses are getting hit hard. But a Houston toy store might be weathering the storm.
HOUSTON, TX・3 DAYS AGO
ABC13 Houston

A tiny, terrified orange tabby kitten was trapped on top of a 30-foot pillar for hours until help arrived.
HARRIS COUNTY, TX・3 DAYS AGO
ABC13 Houston

The University of Houston Moores School of Music will present "Impressions of a Memory" on Dec. 5, a concert benefiting the Houston Food Bank.
HOUSTON, TX・4 DAYS AGO
ABC13 Houston

It was a sick day for the Texans, who plan to get back to work Thursday. Coach David Culley said they haven't had any positive COVID-19 tests.
NFL・4 DAYS AGO
ABC13 Houston

They say everything is bigger in Texas, and that might even include our reputation for tiny homes!
TEXAS STATE・5 DAYS AGO
ABC13 Houston

Baseball loving Houstonians know the story, but in case you don't, here is what led to a name change on Dec. 1, 1964.
MLB・4 DAYS AGO
ABC13 Houston

"These children are just numbers." That's how some families feel as one company drills closer to homes and day cares near Latino and Black or low-income communities.
TEXAS STATE・5 DAYS AGO